At President Trump's Last Visit to the Border Wall, Here's What to Know About Its Legacy

President Donald Trump participates in a ceremony commemorating the 200th mile of border wall at the international border with Mexico in San Luis, Arizona, June 23, 2020.
Photo by Saul Loeb/AFP via Getty Images
By Jasmine Aguilera

President Donald Trump landed in Alamo, Texas, on Tuesday to commemorate the construction of a wall along the U.S.-Mexico border. The visit is Trump’s first public appearance since rioters stormed the U.S. Capitol at his behest on Jan. 6, and it will be the President’s last visit to the wall that was a cornerstone of his immigration policy before he leaves office.

Although Trump campaigned on a promise to build a wall along the entire 800 miles of U.S.-Mexico border during his first term in office, he is has not made good on that promise. As of Jan. 4, the federal government has designated $15 billion towards constructing the wall, but only 47 miles of wall have been built where no barrier previously existed, according to U.S. Customs and Border Protection (CBP). (Under the Trump Administration, the government built a total of 452 miles of border wall, but roughly 400 miles were reconstructions of existing barriers, primarily in California, Arizona and New Mexico.)

Trump has, however, succeeded in transforming physical border security—an issue that once earned bipartisan support—into a third rail political issue. President-elect Joe Biden has promised that not “another foot” of wall would be constructed under his Administration, although he has said he would not take steps to remove the barrier constructed under Trump. Biden would be the first president since George H. W. Bush not to build additional barriers at the border.

“It’s not surprising to me that Biden wouldn’t want to remove the wall,” says Jessica Bolter, associate policy analyst at the Migration Policy Institute, noting how politicized the issue has become in the last five years. “Removing this symbol of Trump’s presidency would invite such a political firestorm and would be seen as such a political move that it might infringe on his ability to move forward with other actions at the border.”

Here’s what to know about the future and legacy of Trump’s border wall.

Biden’s plan for the future of the wall

Biden has promised to undo most, if not all, of Trump’s immigration policies, many in the first 100 days of office, including a complete halt on border wall construction. Biden’s plan for his first 100 days in office include putting an end to Trump’s February 2019 National Emergency declaration that diverted billions of dollars from other federal programs to build the wall. For example, in FY2019, the U.S. Department of Defense identified $2.5 billion from a counter narcotics program to fund wall construction, according to CBP. The following fiscal year, it identified an additional $3.8 billion from the same counter narcotics program. In FY2019, the Department of Defense also identified $3.6 billion from military construction to go towards the wall.

“Building a wall from sea-to-shining-sea is not a serious policy solution—it’s a waste of money, and it diverts critical resources away from the real threats,” the Biden Campaign website reads. A spokesperson for the Biden transition team did not immediately return TIME’s request for comment.

Most of the wall construction took place in 2019, according to Bolter. “At this time a year ago in January of 2020, 100 miles of border wall had been completed in three years of the Trump Administration,” she says. “So we’re looking at 350 miles completed since then.”

The Trump Administration has also continued to award construction contracts to builders as recently as this month, according to CNN. “We believe that probably by January 17, 18, 19, we will have well over 700 miles of that 800 funded,” acting CBP commissioner Mark Morgan told CNN on Jan. 5.

Though the federal government has the power to terminate these contracts, the government will likely still have to pay a termination fee, which Bolter says is likely still cheaper than continuing to fund the border wall construction.

Instead, Biden plans to focus on investing in border technology to increase the effectiveness of screening at ports of entry, and increase partnerships with Canada and Mexico.

The move to keep Trump’s border wall intact was likely an important policy decision. “It reflects a lot of what the president-elect’s supporters want, it reflects the president-elect’s views on immigration,” says John Hudak, deputy director of the Center for Effective Public Management and a senior fellow in Governance Studies at the Brookings Institution, a nonprofit research and public policy organization. “There’s just better uses of that funding for what is a truly broken system of immigration that needs all the investments it can get,”

On Tuesday, the ACLU filed a brief with the Supreme Court arguing that the wall should be removed, arguing that the president acted unlawfully by diverting funds to cover the cost of the wall instead of working with Congress. It will decide the outcome of the case next month.

‘The wall is like a battery power for racial division’

Like the wall itself, Trump’s Tuesday visit to the U.S./Mexico border was surrounded by controversy. Local activists and politicians spoke publicly against Trump’s visit and called on the White House to cancel it out of fear of further violence. Meanwhile, Trump faces pressure to resign from office, and is facing being impeached for the second time for inciting a mob of supporters to storm the U.S. Capitol on Jan. 6.

Local activists expressed concerns for the safety of marginalized communities who live along the border in light of acts of violence committed by Trump supporters at the Capitol. Some shared their fears of continuing the spread of COVID-19 because large crowds are expected to show up when the president speaks in front of the wall on Tuesday. Others shared that they were offended by Trump visiting one of the locations impacted by Zero Tolerance Policy, when thousands of children were separated from their parents upon entering the U.S.

One complaint consistently expressed by opposers since Trump first made his campaign promise to build the wall is that it is a symbol of racism and xenophobia. “The wall is like a battery power for racial division,” Laredo activist and organizer Juan Ruiz said in a public statement on Monday. “Trump is coming here to get recharged, and power up his base. Biden needs to shut it off.”

Bolter adds that it shouldn’t be a surprise that Trump was paying a visit to the border wall days before he leaves office. “We’ve seen throughout his presidency that when President Trump is feeling attacked on other fronts, he reverts to immigration. That’s his core issue, that’s the issue that really riles up his base and that he’s able to get a lot of support from them on,” she says. “Especially when there’s talk of him being removed from office, he’s trying to go back and show the promises that he’s been able to keep and what he’s been able to get done.”

A January 2019 survey by the Pew Research Center found that 58% of Americans opposed expansion of the border wall, but also found that 82% of Republicans and those who lean toward the Republican party supported substantially expanding construction, an increase of 10% from the previous year, despite the funding coming from American taxpayers.

Despite the fact that Trump hasn’t made good on his promise that Mexico would pay for the wall or that it would be complete by the end of his first term, doesn’t appear to be an issue for those who support him. “[Trump] supporters have had a magical way of adjusting their expectations to continue to support a president who has failed to deliver on those promises,” Hudak says. “His supporters seem not to have a problem with both the failed campaign promise and their own need to pay for this border wall that they weren’t supposed to have paid for in the first place.” 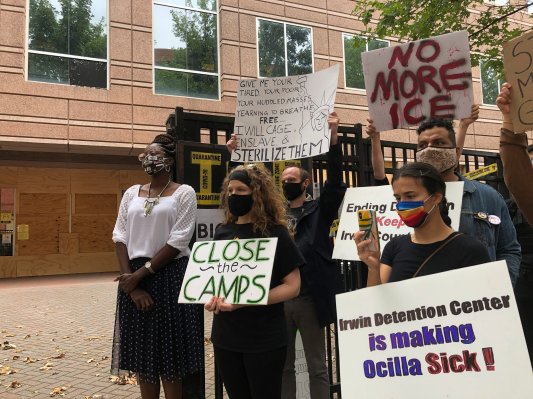