With $3.6 Billion in New Defense Department Funding, President Trump Continues His Plan to Build the Border Wall With Military Money

A US Army soldier closes a razor-wire gate at a compound where the military is erecting an encampment near the US-Mexico border crossing at Donna, Texas, on November 6, 2018.
ANDREW CULLEN—AFP/Getty Images
By W.J. Hennigan and Brian Bennett

The Pentagon plans to tap into $3.6 billion in funding set aside for military construction projects and instead funnel it toward building a wall on the U.S. southern border with Mexico helping to make good President Donald Trump’s signature campaign promise.

Defense Secretary Mark Esper on Tuesday signed off to reallocate the money from 127 different projects — typically intended for building construction, maintenance and repair — located inside and outside the United States and instead pay for 175 miles of border wall, Pentagon officials said.

With the decision, the Defense Department is now planning to divert at least $6.1 billion toward building 295 miles of wall since Trump declared an emergency on the border in February. The Army Corps of Engineers is now beginning a contracting process for construction companies to bid on building barriers, both new and refurbished, across stretches of the southwestern United States.

“It’s a combination of areas of where there was no barrier previously and areas where we’re replacing existing, older, less capable barrier,” Kenneth Rapuano, Assistant Secretary of Defense for Homeland Defense and Global Security, told reporters at the Pentagon.

The official list of deferred military construction projects wasn’t made public until notifications were made to the lawmakers and diplomats whose regions are expected to be impacted. Pentagon officials began informing Congressional members of the plans to raid the funding, about half of which will come from projects inside the states and half will come from projects outside. Both Democrats and Republicans have been critical of reallocating construction funds out of fears that projects in their home states will be targeted.

Pentagon spokesman Jonathan Hoffman told reporters the money would not be taken from “family housing, barracks or dormitory projects.”

Earlier this year, Congress gave Trump funding to build just 55 miles of wall along the U.S.-Mexico border, but Trump declared a national emergency — a move aimed at accessing billions of dollars in federal funding without receiving Congressional approval. That decision was widely seen as a last-ditch “nuclear option,” and has since sparked legal challenges and rattled the balance of power in the federal government.

Sen. Jack Reed of Rhode Island, the top Democrat on the Senate Armed Services Committee, said the Trump administration “is trying to circumvent Congressional authority” and said the action should be struck down by the courts. “If it stands, future Presidents will make similar end-runs to try and tap defense dollars for anything a President wants to label a ‘national emergency,’” Reed said, adding: “With this move, President Trump is short-changing our troops and taxpayers and forcing them to bear the burden of his broken, preposterous campaign promise.”

The Pentagon has developed different accounting schemes to pay for the wall. It has already taken $2.5 billion that had been allocated for military personnel and transferred it into a counter-drug account, a move that gave the military authority to take measures to support federal law enforcement efforts to stop drug trafficking, such as building barriers. That money is now being used to build more than 120 miles of border wall.

The Sierra Club, American Civil Liberties Union and Southern Border Communities Coalition are currently challenging the decision in the courts. However, the Supreme Court said last month in a 5-4 vote that wall construction can continue while the federal appeals process plays out.

It may still be tricky for the Pentagon to launch wall construction projects across the entirety of the 2,000-mile southwestern border. Some of the land is private, while other areas belongs to the federal government. The easiest places to build will be along military property like the Barry Goldwater Air Force Range in Arizona. But even then, Pentagon officials said, construction wouldn’t be able to begin for three months or more.

The U.S. military’s border mission is now expected to last well into 2020 and perhaps beyond, the officials said. There are now about 5,700 troops, including 2,000 members of the National Guard, deployed along the southwest border.

The U.S. military has been forbidden to take part in domestic law enforcement since the Posse Comitatus Act of 1878. Service members can only assist, and that’s exactly what they have done since Trump directed the military to support DHS on the border more than a year ago.

U.S. troops have welded coils of razor wire atop border fences and points of entry with Mexico in California, Arizona and Texas. They have coated parts of the fence with “anti-climb” paint. They also operate telescopic video cameras, known as “Mobile Surveillance Cameras,” in all nine Department of Homeland Security (DHS) Patrol Sectors in each of the four states bordering Mexico. The devices are armed with infrared cameras, enabling troops to watch for illegal border crossings to operate day or night. The Defense Department has also approved multiple DHS requests, including for providing aerial reconnaissance, ground surveillance, search and rescue support, medical support, engineering support, helicopter transportation, personnel protection and other needs.

The Pentagon said last week it has obligated about $450 million for troop deployments in support of DHS, in addition to the $6.1 billion for the border wall. 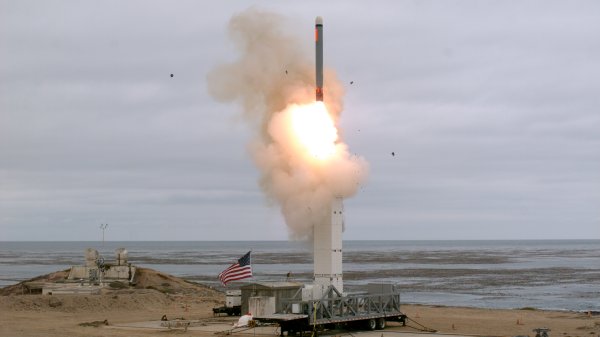