President Trump's National Emergency Sets Him Up for Another Fight. He's Fine With That

Congress gave President Donald Trump funding to build just 55 miles of wall along the U.S.-Mexico border, but he believes he’s found a way to stretch it into 234 miles.

In a rambling, 50-minute speech Friday in the White House Rose Garden, Trump declared a national emergency—a move that may allow him to access billions in federal funding without receiving Congressional approval.

Trump’s decision to declare a national emergency was widely seen by both Democrats and many Republicans as a last-ditch “nuclear option” that will likely spark multiple legal challenges and fundamentally shake the balance of power in the federal government. If the President’s decision stands, future presidents of both parties will be able to invoke a national emergency to avoid Congress’s primary constitutional check on unilateral executive action: the power of the purse.

Trump acknowledged in the Rose Garden speech Friday that he will likely have to defend his decision to exercise presidential authority in this way all the way to the Supreme Court. But, he said, he felt compelled after Congress sent him a spending bill that included only a fraction of the money he wanted for the construction of a “big, beautiful wall,” his signature campaign promise. “We are going to do it one way or another. We have to do it,” Trump said of building a wall. “We are talking about an invasion of our country,” he added, predicting that even if a legal challenge went to the Supreme Court, he’d ultimately win.

Almost immediately after the speech, top Democrats, including House Speaker Nancy Pelosi and Senate Minority Leader Chuck Schumer, decried Trump’s decision as “unlawful,” and described it as an unprecedented use of presidential authority. Past U.S. presidents have declared national emergencies to address wars or foreign crises, not to redirect federal funds after being stymied by Congress.

Trump downplayed claims that his decision is unprecedented. Since 1976, Presidents have declared national emergencies 58 times. He also denied that he was trying to sidestep a second politically damaging shutdown just weeks after a standoff over funding the President’s proposed border wall shuttered the government for 35 days and briefly dented his approval ratings. “I didn’t need to do it for the election,” Trump said, responding to speculation that he’s motivated to deliver on the wall in the run up to the 2020 campaign. “I just wanted to get it done faster.”

Trump will use a combination of emergency powers and reshuffling existing funds to scrape together “roughly $8 billion worth of money to secure the southern border,” Acting Chief of Staff Mick Mulvaney told reporters on Friday. Mulvaney blamed Congress for failing to fully fund Trump’s wall. “They are simply incapable of providing the amount of money necessary, in the president’s eyes, to address the current situation at the border,” he said.

To build his wall, Trump plans to add to the $1.375 billion Congress passed to build 55 miles of fencing in Texas’s Rio Grande Valley by diverting $600 million in seizures from the Treasury Department. He’ll also take $2.5 billion set aside for Defense Department drug interdiction programs, and another $3.6 billion in military construction funds that have not yet been allocated to a specific contract. The military generally uses that money to fund construction projects, including family housing, building maintenance and infrastructure repair, both at home and abroad.

In Fiscal Year 2019, Congress set aside about $10 billion for military construction, but those funds have not yet been attached to specific contracts, according to two congressional aides. The total amount of available funds maybe more than double that. The aides said Congress has identified as much as $21 billion that could potentially be made available. By declaring a national emergency, Trump may have the authority to unilaterally redirect that money.

In deciding to declare a national emergency, Trump said he consulted military “generals” who told him what the construction funding would be used for, but “it didn’t sound important.” But both Democrats and Republicans said they were concerned that the White House’s tactics will make military projects vulnerable.

Rep. Mac Thornberry, the ranking Republican on the House Armed Services Committee, advised the White House not to divert critical funds from important military projects. “Doing so would have detrimental consequences for our troops as military infrastructure was one of the accounts most deprived during the Obama-era defense cuts,” he said Thursday in a statement. “And it would undercut one of the most significant accomplishments of the last two years—beginning to repair and rebuild our military. I hope that the President will pursue other options.”

The White House has signaled it will pay the military back in the next fiscal year—a budgeting tactic known as “back-filling.” But policy analysts say that would be a lengthy process, and likely result in budget shortfalls for projects that need urgent attention. The Pentagon has yet to comment on the White House plan. Acting Defense Secretary Patrick M. Shanahan refused to answer reporters’ question on the matter at the Munich Security Conference in Germany. “I’ll talk to you later about it,” he said.

One legal vulnerability to Trump’s emergency order may turn out to be precedent set by a 2014 ruling that reined in President Obama’s implementation of the Affordable Care Act. In that case, a district court judge allowed the House as an institution to sue the president for stepping on its Constitutional authority. In an ironic twist, that ruling—celebrated by many of Trump’s most ardent supporters—may have paved a path for House Democrats to demand that a judge reign in the President’s ability to act on his own to build a border wall.

Jonathan Turley, professor at George Washington University Law School who served as attorney for the House of Representatives in that Affordable Care Act case, says that he thinks Trump may have better prospects in the courts than Obama did, largely because Trump will be using appropriated funds for his wall. “This is a case of the chickens coming home to roost,” Turley wrote in an email. “Congress passed a law with largely unfettered authority and appropriated funds with largely unconditioned uses. Federal courts are not designed to protect Congress from itself.”

With reporting by Tessa Berenson in Washington 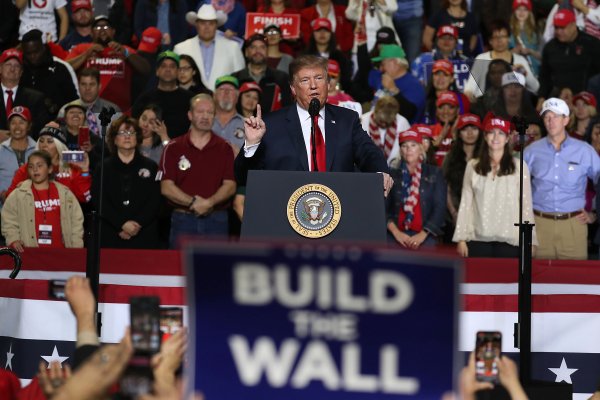 The Facts About Trump's False 'Late-Term Abortion' Claims
Next Up: Editor's Pick