In an interview that circulated widely last January, the public saw a novel side of Martin Scorsese. Asked whether he’d seen the comic-book blockbuster Joker, Scorsese explained to the New York Times that watching a few clips had told him everything he needed to know about the film. “I get it,” he said. “It’s fine.” He sounded like neither the directorial eminence revered for his chronicles of gangsters, rockers and New York after dark, nor like good ol’ Marty, universally beloved champion of film preservation and benefactor to auteurs the world over. He wasn’t even, exactly, the guy who, months earlier, had remarked that Marvel movies resembled theme parks more than cinema, then explained himself at length when a boring controversy ensued. The Scorsese who dispatched Joker with five monosyllabic words wasn’t just a defender of filmmaking as art—he was a wit, a provocateur, a man of taste who was done apologizing for it.

I like to imagine that the quote, which still makes me laugh a year later, reflects the influence of Fran Lebowitz. Clearly, she occupies plenty of space in Scorsese’s brain. The 70-year-old humorist, commentator, chronically blocked writer, sometime actor and Manhattan fixture—a master of the short sentence as well as the offhand dismissal—was the subject of his HBO documentary Public Speaking, from 2010. And on Friday, Jan. 8, the longtime friends will return to the screen with a deeply pleasurable seven-episode Netflix docuseries called Pretend It’s a City.

If you know anything about Lebowitz, and you should, it has probably already struck you that streaming television is a bizarre place to find her. For the past half-century, beginning with a column in Andy Warhol’s Interview and the publication of two classic humor anthologies, Metropolitan Life in 1978 and Social Studies in 1981, she has made a career out of the pithy articulation of unusual, generally negative opinions—including a notorious antipathy for technology. Lebowitz owns neither a computer nor a mobile phone. This isn’t just a quirk of advancing age. As she recounts to Scorsese in the series, she never even bought a typewriter, because who wanted to spend time learning to type? (Another of her favorite topics, and one she often cites by way of explaining why she now works as a speaker rather than a writer, is her unrepentant laziness.)

If Pretend It’s a City has a thesis, it is that Lebowitz’s perhaps-masochistic devotion to observing what she calls her “fellow man” gives her a rare perspective on society—and particularly on the metropolis that has, over the years, been the most consistent object of her tough love. The title refers to her frustration with people so absorbed in their devices that they bump into you on the street. “Pretend it’s a city—where there are other people,” she pleads. But this is hardly a high-concept show. Scorsese seems solely interested in putting a worthy frame around the living, breathing, eloquently complaining work of art that is Fran Lebowitz in conversation.

Although the full series runs slightly shorter than the director’s Netflix gangster requiem The Irishman, the episodic format serves a purpose beyond luring in viewers who might balk at a 209-minute movie but would happily binge through seven half-hours of TV. Each organized around a loose cluster of themes—money and its New York handmaiden real estate, Lebowitz’s love of smoking and hatred of wellness culture—the episodes resemble chapters of her books. In artfully constructed montages, the subject holds court in chats with Scorsese as well as on talk shows and at speaking engagements from the ’70s through the present. She moves through cleverly chosen locations in the pre-pandemic city, struggling to deactivate the video screen in a cab, wandering around the Queens Museum’s scale model of the five boroughs like a flâneur Godzilla. We watch her entertain interlocutors from Alec Baldwin to Spike Lee (who gamely challenges her insistence that sports are for children) to her late friend Toni Morrison.

Resplendent in her trademark suit jackets, jeans and cowboy boots, black hair parted down the middle like her spiritual forebear Oscar Wilde, she holds forth, magnificently, on writing: “Most people who love to write are terrible writers.” On queer liberation: “Nothing is better for a city than a dense population of angry homosexuals.” On nine-figure art auctions: “We live in a world where they applaud the price, not the Picasso.” On people longing to see their own experiences represented in books (one of her great loves, along with sleep, parties and cigarettes): “A book isn’t supposed to be a mirror—it’s supposed to be a door.” On guilty pleasures: “I have no guilty pleasures, because pleasure never makes me feel guilty.”

While many of her idiosyncratic opinions are sublime, a handful of them have aged quite poorly. (She may be a queer woman, but neither feminism nor the gay liberation movement escaped her derision.) The thing is, Lebowitz’s appeal lies in the way she expresses those ideas. And in that respect, as wonderful as her essays remain, she may be an even better speaker than writer. Firm as she may be in her opinions, as a conversationalist she’s sly, self-deprecating, good-natured, with impeccable comic timing. An anecdote about a “foul odor” on the subway—not exactly a novel subject for a New Yorker—had me in hysterics. Lebowitz comes across as a genuine original, not a calculated contrarian like Christopher Hitchens or Bill Maher (whose show she sometimes visits). Asked, by an audience member at a speaking engagement, if she feels suffocated by a climate of political correctness, she shrugs: “I’m breathing fine.” And she says that she likes talking to children because “they are not yet filled with clichés,” which makes sense because, in seven decades of life, she’s retained her intellectual sovereignty as well. She doesn’t shy away from sincerity, either; her thoughts on Motown, the pop music of her youth, verge on rhapsodic.

Fran Lebowitz in 'Pretend It's a City'
COURTESY OF NETFLIX

No one enjoys Lebowitz’s company more than Scorsese, which is presumably why he has done us the kindness of using his medium to share it. In their onstage Q&As, she reduces him to fits of giggles. But the longest and richest segments place the viewer across the table from the director, inside the kind of low-lit watering hole millions of New Yorkers miss terribly these days. Instead of sharing her spotlight, in these scenes Scorsese often places the camera just over his shoulder, so that we can imagine the experience of an evening out with Lebowitz. We should all be so lucky as to find someone who looks at us the way Marty looks at Fran. 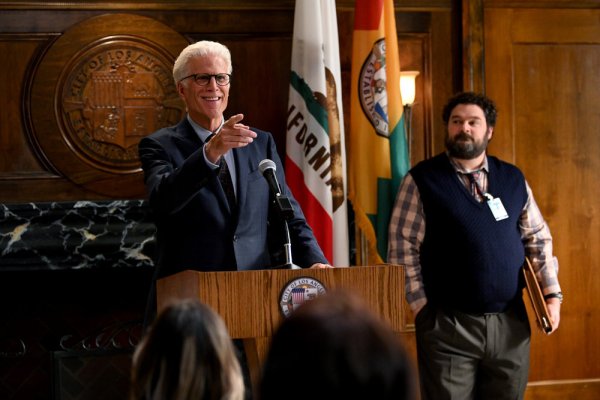 'Mr. Mayor' Spells Hope for the Network Sitcom
Next Up: Editor's Pick