Joker Wants to Be a Movie About the Emptiness of Our Culture. Instead, It’s a Prime Example of It

It’s official. With Joker, Joaquin Phoenix is a certified graduate of the Acme Academy of Dramatic Arts. You want acting? Come and get it.

But don’t for a minute think Phoenix isn’t funny, too. They say you never forget Clowning 101, and Phoenix hasn’t: He hops around like an unhinged Emmett Kelly, twisting his physique into weird and unsettling shapes. His body has a rubbery angularity, like a chicken bone soaked in Coca-Cola.

In Joker — playing in competition here at the Venice Film Festival — Phoenix is acting so hard you can feel the desperation throbbing in his veins. He leaves you wanting to start him a GoFundMe, so he won’t have to pour so much sweat into his job again. But the aggressive terribleness of his performance isn’t completely his fault. (He has often been, and generally remains, a superb actor. Just not here.)

Director Todd Phillips — who made frat-boy comedies like Road Trip and Old School before graduating to dude-bro comedies like The Hangover movies — bears at least some of the blame, and the aggressive and possibly irresponsible idiocy of Joker overall is his alone to answer for. Phillips may want us to think he’s giving us a movie all about the emptiness of our culture, but really, he’s just offering a prime example of it.

Joker is a stand-alone origin story that dovetails with, but does not strictly follow, DC Universe Batman lore. Phoenix’s Arthur Fleck — he’ll later become one of Batman’s nemeses, the Joker, in case you didn’t already know that — is an odd, lonely guy who lives at home with the mother (played by a wan Frances Conroy) he love-hates.

Arthur works for a sad rent-a-clown joint, and nothing ever goes right. This is clear from the moment we meet him: he’s tense and nervous and he can’t relax. The movie is set in a Gotham City that’s a lazy approximation of gritty 1970s-era New York, complete with garbage strikes and “super-rats” overrunning the city. On the job in clown costume, Arthur gets beaten up by a mob of nasty punks — and then almost gets fired because they stole and broke the “going out of business sign” he was twirling for a client.

More bad stuff happens, day in, day out. He gets angrier and more isolated by the minute. No one is ever kind to Arthur; he’s the world’s saddest punching bag.

When the city’s social services close down, he can no longer receive counseling there, or get his meds. (He carries around a little laminated card that he holds out helpfully whenever he laughs inappropriately, which is pretty much all the time. It reads, “Forgive my laughter, I have a brain injury.”) The one bright spot of his day, or night, is watching a Johnny Carson-style talk-show host, Murray Franklin (Robert De Niro), on television. He dreams of being a stand-up comic and someday being on the show. His wish will come true, but life will have beaten the poor lad down interminably before then.

Read more: Here Are All the Upcoming Joker Movies

As you can probably guess, all of Arthur’s travails are leading up to a series of “See what you made me do?” brutalities, most of which happen while he’s dressed up in his clown suit. Violence makes him feel more in control, less pathetic. Killing — usually with a gun, but scissors or a good old-fashioned suffocation will do just fine — empowers him.

But it’s not as if we don’t know how this pathology works: In America, there’s a mass shooting or attempted act of violence by a guy like Arthur practically every other week. And yet we’re supposed to feel some sympathy for Arthur, the troubled lamb; he just hasn’t had enough love. Before long, he becomes a vigilante folk hero — his first signature act is to kill a trio of annoying Wall Street spuds while riding the subway, which inspires the masses to don clown masks and march enthusiastically around the city with “Kill the Rich!” placards.

Arthur also tries to work out a personal beef with rich asshat and aspiring city mayor Thomas Wayne, father of you-know-who. Because, it turns out, Arthur has some daddy issues too. Who would have guessed?

Joker — which was written by Phillips and Scott Silver — doesn’t have a plot; it’s more like a bunch of reaction GIFs strung together. When Arthur gets fired from his clown job, he struts by the time-clock, deadpans, “Oh no, I forgot to punch out” and then, wait for it, socks it so hard it dangles from the wall. Make a note of the moment, because you’ll be seeing it a lot in your Twitter and Facebook feeds.

The movie’s cracks — and it’s practically all cracks — are stuffed with phony philosophy. Joker is dark only in a stupidly adolescent way, but it wants us to think it’s imparting subtle political or cultural wisdom. Just before one of his more violent tirades, Arthur muses, “Everybody just screams at each other. Nobody’s civil anymore.” Who doesn’t feel that way in our terrible modern times? But Arthur’s observation is one of those truisms that’s so true it just slides off the wall, a message that both the left and the right can get behind and use for their own aims. It means nothing.

Meanwhile, the movie lionizes and glamorizes Arthur even as it shakes its head, faux-sorrowfully, over his violent behavior. There’s an aimless subplot involving a neighbor in Arthur’s apartment building, played by Zazie Beetz, in an underdeveloped role. (Beetz also appears in another movie here at the festival, Benedict Andrews’s Seberg, where she’s given much more to do.) Arthur has a crush on her, and though he does her no harm, there’s still something creepily entitled about his attentiveness to her. He could easily be adopted as the patron saint of incels.

Arthur is a mess, but we’re also supposed to think he’s kind of great — a misunderstood savant. Dressed up for his big TV moment in a turquoise paisley shirt, marigold vest and dapper cranberry suit (admittedly a marvelous feat of costume design), Arthur struts down an outdoor stairway like a rock’n’roll hero. It’s the most energizing moment in the movie, but what is it winding us up for? Arthur inspires chaos and anarchy, but the movie makes it look like he’s starting a revolution, where the rich are taken down, the poor get everything they need and deserve, and the sad guys who can’t get a date become killer heroes. There’s a sick joke in there somewhere. Unfortunately, it’s on us. 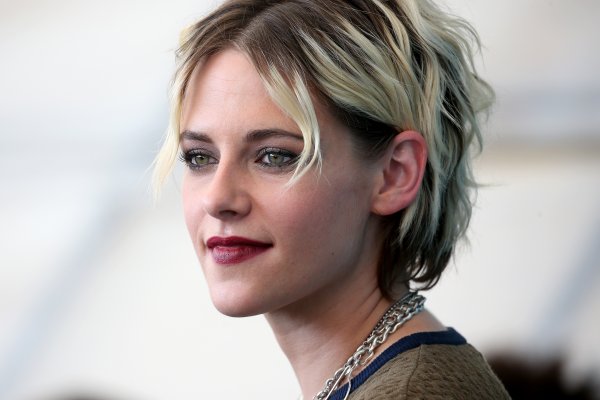 Kristen Stewart Exudes the Bold, Shimmering Presence of a Woman in Pain in Seberg
Next Up: Editor's Pick