Toni Morrison, the Pulitzer Prize-winning author who illuminated the joys and agonies of black American life through breathtakingly vital works like Beloved, Song of Solomon and A Mercy, died on Monday night, her publisher Knopf confirmed. She was 88 years old.

Over her six-decade career, she wrote 11 novels, five children’s books, two plays, a song cycle and an opera. She served as an editor and professor, mentoring generations of young writers of color. After being largely ignored as a writer for a decade in the ‘70s, Morrison went on to win accolade after accolade, from the Nobel Prize in Literature to the Presidential Medal of Freedom to the PEN/Saul Bellow Award for Achievement in American Fiction.

Morrison widened the nation’s literary canon, serving as its conscience through trying times and establishing herself as the keeper of its marginalized histories. Through her inventive turns of phrase, graceful incorporation of African-American vernacular, textured character portraits, sharp historical gaze and tragic plot turns, she is one of the most accomplished and impactful writers in the history of American literature.

“What was driving me to write was the silence — so many stories untold and unexamined,” she told The New Yorker in 2003.

Morrison was born Chloe Ardelia Wofford on February 18, 1931, in the rust-belt town of Lorain, Ohio. She was the second of four children born to Ramah (née Willis), a homemaker, and George Wofford, a shipyard welder. Both of her parents witnessed the unbridled racism of the south firsthand: her father, as a child, saw the lynching of two men, and harbored a deep distrust of white people for the rest of his life. The family’s life in the more integrated Lorain was nevertheless extremely trying, especially during the Great Depression: When Morrison was about two, her family’s landlord set their apartment on fire for not being able to afford the rent.

Stories were an integral part of family life. Her parents told her ghost stories and traditional African-American folktales; so did her grandmother Ardelia Willis, who also lived with them. “She told us stories to keep us working at tedious tasks,” Morrison wrote of her grandmother in the foreword to Tar Baby, “picking through baskets of wild grapes to sort out the bruised; to take our minds off pain and chickenpox; to split open the dreary world to expose an enchanted one.”

Morrison was a precocious reader who devoured works by Jane Austen, Richard Wright, Mark Twain and many more. She converted to Catholicism when she was 12, and as a teenager she joined her school’s yearbook staff and debate team. To make money she cleaned houses for white families and worked as a secretary to the head librarian at the Lorain Public Library.

When Morrison reached college age she decided to attend Howard University — her father took on another job in order to afford the tuition, flouting union rules. There, she studied humanities under Alain Locke — the acknowledged “Dean” of the Harlem Renaissance — and joined the Howard University Players, the school’s theatrical group, with which she toured the segregated south. After graduating in 1953 she went on to Cornell, where she received a master’s degree in English and wrote her thesis on William Faulkner and Virginia Woolf.

After graduating from Cornell, Morrison embarked on her teaching career, first landing a job at Texas Southern University, and then back at Howard, where she taught the soon-to-be civil rights activist Stokely Carmichael. It was there that she met Harold Morrison, an architect, and the couple wed 1958; the pair went on to have two children (Ford and Slade) before divorcing in 1964.

During this era she began work on her first novel, The Bluest Eye, which depicted a victimized adolescent black girl obsessed by white beauty standards, and who begs God to turn her eyes blue. “I wanted to read this book and no one had written it, so I thought that maybe I would write it in order to read it,” she told The Guardian in 2015. She hoped to write a novel devoid of the white gaze, which she felt hovered over the work of even the most celebrated black writers like Ralph Ellison and Frederick Douglass.

“I’ve spent my entire life trying to make sure the white gaze was not the dominant one in any of my books,” she said in the 2019 documentary Toni Morrison: The Pieces I Am.

The Bluest Eye was published in 1970 to a minimal response, although the New York Times reviewed it positively, calling her a “writer of considerable power and tenderness.” To earn a living for herself and her two children, Morrison worked as an editor at Random House, encouraging black writers like Gayl Jones and Angela Davis to embrace their own unique and culturally-specific voices. “The way black people talk is not so much the use of non-standard grammar as it is the manipulation of metaphor,” she said in a 1994 interview with Nellie McKay.

In 1974, she published The Black Book, an anthology of African-American life and history that greatly influenced the perception of black anthropology and culture. Two years later, she fought for the publication and marketing of Muhammad Ali’s autobiography The Greatest, despite his controversial rejection of the Vietnam War.

Gaining prominence in the literary world

As Morrison held down a full-time job and raised two children, she wrote whenever she could find time: at daybreak, or in the midst of a commute. Davis, interviewed in The Pieces I Am, recalls that Morrison would scribble paragraphs on the steering wheel of her car while stuck in traffic. Morrison stole enough writing time to be able to publish two more novels in the ‘70s: Sula (1973), which traced a black Ohio neighborhood through the eyes of two best friends; and Song of Solomon (1977), a decades-long epic chronicling the life of a black man.

The latter, in particular, broke through to national audiences, winning the National Book Critics Circle Award. The book’s success convinced her that she could commit herself to being a full-time writer. In 1981, upon the release of her fourth novel, Tar Baby, she was on the cover of Newsweek, becoming the first black woman to appear on the cover of a national magazine since Zora Neale Hurston in 1943.

Her best-known work, Beloved, was published in 1987. The novel is based on a true story Morrison came across while publishing The Black Book — of a runaway slave who kills her infant daughter after being recaptured by enslavers. An instant sensation, the novel remained on the best-seller list for 25 weeks and was added to school reading lists across the country. After its snubbing at the National Book Awards ensued a heated controversy, the novel won the Pulitzer Prize for fiction.

“I felt I represented a whole world of women who either were silenced or who never had received the imprimatur of the established literary world,” Morrison told The New York Times Magazine in 1994.

While Morrison became revered, she also became feared —for her works’ graphic violence or sexually explicit content. Time and time again, her books were removed from school curriculum; her novel Paradise was even banned in Texas prisons for fear it would cause a riot.

“History has always proved that books are the first plain on which certain battles are fought,” she said in The Pieces I Am.

The 1990s were full of awards and accolades for Morrison. She was chosen for a Nobel Prize in Literature in 1993, the Jefferson Lecture for the National Endowment for the Humanities in 1996, and the 1996 National Book Foundation’s Medal of Distinguished Contribution to American Letters. She wrote two more novels (1992’s Jazz and 1997’s Paradise) and extensive essays about the racially charged controversies of the era, from the Anita Hill hearings to Bill Clinton’s cultural blackness to the O.J. Simpson trial. She also developed a famous bond with Oprah Winfrey, who added some of Morrison’s novels to her influential Book Club, and who starred and co-produced a 1998 film adaptation of Beloved.

“It’s impossible to actually imagine the American literary landscape without a Toni Morrison,” Winfrey said in 2018. “She is our conscience, she is our seer, she is our truth-teller.”

But with success also came tragedy. In an eerie example of life imitating art, Morrison’s home in Rockland County caught fire in 1993 — just like Eva Peace’s did in Sula. Her mother died from unrelated causes less than a year later.

Morrison appeared on the cover of TIME in 1998 following the release of Paradise. In the article, she talked about her new novel and her inauspicious origins: “The world back then didn’t expect much from a little black girl, but my father and mother certainly did.”

After the millennium, Morrison released four more novels to great acclaim and taught at Princeton until her retirement from that post in 2006. In 2008, she made her first-ever presidential endorsement, in support of Barack Obama; Four years later, he reciprocated by awarding her the Presidential Medal of Freedom.

Toni Morrison receives the Presidential Medal of Freedom from President Barack Obama in the East Room of the White House on May 29, 2012 in Washington, D.C.
Leigh Vogel—WireImage

“I remember reading Song of Solomon when I was a kid and not just trying to figure out how to write, but also how to be and how to think,” President Obama said at the ceremony. “Toni Morrison’s prose brings us that kind of moral and emotional intensity that few writers ever attempt.”

Shortly after her death, Obama also poignantly praised her in Twitter, calling her a “national treasure.”

Morrison’s Medal of Freedom arrived during yet another period of grieving: Two years earlier, her son Slade died of pancreatic cancer at the age of 45; the pair had written several children’s books together. Morrison was in the process of writing her novel Home, and her grief left her unable to write. She eventually regrouped and published the novel the same month she received her Medal of Freedom, telling the Telegraph that year that she realized “the last thing my son would want was for me to be very self-involved and narcissistic and self-stroking.”

“The writing is — I’m free from pain,” she told NPR’s Fresh Air in 2015. “It’s where nobody tells me what to do; it’s where my imagination is fecund and I am really at my best. Nothing matters more in the world or in my body or anywhere when I’m writing.”

The original version of this story misstated the historical significance of Toni Morrison’s appearance on the cover of Newsweek. The 1981 magazine cover made her the first black woman to appear on the cover of any national magazine–not just Newsweek–since Zora Neale Hurston in 1943. 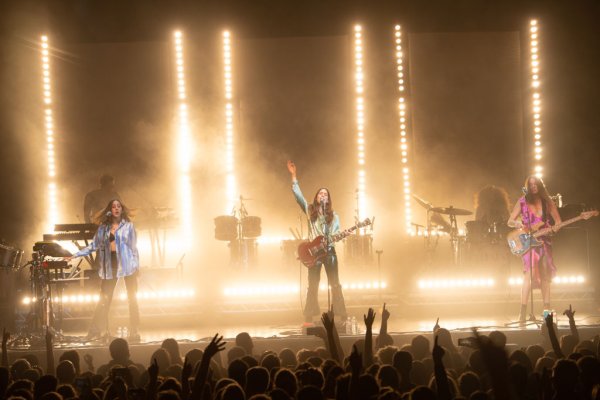