'The Great Gatsby Now Belongs to the People.’ What the Copyright Expiration of the Classic Novel Means for Its Legacy

Between the glitzy parties, secret backstories and climactic murder in F. Scott Fitzgerald’s classic novel The Great Gatsby, there’s a tiny detail that readers may have missed: right before he gets in a car with antagonist Tom Buchanan—the ride that kicks off the novel’s tragic end—narrator Nick Carraway realizes he’s forgotten his own birthday. It’s a detail that stuck with author Michael Farris Smith when he re-read the novel in his 40s, and sparked a lingering question: What makes a man so detached from himself that he doesn’t remember his own birthday?

In Nick, Smith’s prequel to The Great Gatsby, out Jan. 5, the author explores Carraway’s life before he arrives in Jay Gatsby’s world in West Egg, ruminating on his travels and search for home during and after serving in World War I. The timing of the prequel may seem strange, arriving 96 years after the original book’s publication, but it’s intentional: Smith’s novel will be published just days after Gatsby enters U.S. public domain on Jan. 1. Literary works are protected from replication for a certain number of years, depending on when they came out. When the copyright for Fitzgerald’s classic novel of greed, desire and betrayal expires, anyone will be able to publish the book and adapt it without permission from his literary estate, which has controlled the text for the 80 years since his death. That freedom could yield works that add to Gatsby’s legacy—see what Wide Sargasso Sea did for Jane Eyre—or it could open the door to editions that change the text for the worse.

“It has almost the status of a holy work, and it’s seen as embodying all kinds of things about American values and society,” says literary scholar James L. W. West III. In 2008, West set out to restore the text to match Fitzgerald’s original version as closely as possible—rejecting Britishisms and other changes—and the resulting edition, published in 2018, is considered by the estate to be the most authoritative. But now that the copyright is expiring, he and other scholars are both trepidatious and curious about what may come. “If I were a writer thinking about doing a prequel or a sequel,” West says, “I’d be pretty nervous about putting my prose style up against Fitzgerald’s.”

For a book so celebrated, a sense of protectiveness is expected. Scribner reports it has sold more than 20 million copies of its editions in North America alone. Far from a success when it was originally published in 1925, The Great Gatsby is one of the great American novels, adapted several times for the stage and screen, adopted as a shorthand in pop culture for the glamour of the roaring ’20s and recently recommended by former President Barack Obama as a book to help understand the complexities of America. It’s required reading for students everywhere, for a reason: “It introduces them to a real master of the language,” West says.

When he first set out to write Nick in 2014, Smith, the author of five previous books, understood the weight of the project. But he couldn’t shake his idea after connecting with the character through his own experiences living abroad and returning to find his sense of home changed. “That line about Nick when he realizes that he’s on the edge of ‘a decade of loneliness’ really struck me,” Smith says. He blocked out the possibilities of backlash from those who might describe taking on Fitzgerald’s characters as sacrilege, and didn’t tell his agent or editor about Nick until he finished writing it. So when he turned in his manuscript in 2015, he received unpleasant news: he would have to wait six years for the Gatsby copyright to expire, or risk legal consequences. But, he admits, “If I had known, I would have probably procrastinated.”

In addition to projects like Nick, Gatsby fans can expect many more new editions of the original book—author Min Jin Lee and cultural critic Wesley Morris are both writing new introductions to the text. And an illustrated edition from Black Dog & Leventhal, also coming Jan. 5, features the flashy iconography of the era.

Some might view the freedom to explore the story as an opportunity to address issues like Fitzgerald’s flat depiction of women, anti-Semitic descriptions and lack of character diversity. In the U.K., where the copyright expired in 2011, a Bristol theater company will premiere a socially distanced adaptation with two women telling the story as soon as it’s safe to do so. The production’s director, Tom Brennan, found there was a lot to work with in the novel’s details. “When you read the book, there is an unreliable narrator who is a dude that talks about women in a particular way,” Brennan says, adding that the company is closely studying the book’s female characters. West is intrigued by what a playwright could do by shifting perspectives. “What if that book had been told by Daisy? Or Jordan Baker? Or Myrtle Wilson?” he asks.

What makes The Great Gatsby so beloved is neither its plot nor its characters. “It’s not a particularly original story,” says Jackson R. Bryer, president of the F. Scott Fitzgerald Society, which promotes and celebrates the author’s work. “It’s the way Fitzgerald tells the story and the beauty of the style.” He likens the experience of reading Gatsby to that of poetry, where each phrase is deliberate, and echoes concerns about what may happen when anyone can edit the text. “It’s like if you took a Robert Frost poem and put a wrong word somewhere,” Bryer says. “It probably wouldn’t change the overall meaning of the poem, but it wouldn’t be the poem.”

Even so, Bryer is hopeful that people will now revisit the novel, perhaps for the first time since school. He remembers how his own interpretation of Gatsby changed—he first read it as a tragic love story, and later realized that it interrogates the constraints of social class. And he finds Gatsby’s relevance unwavering today: “We’re living in a time where the social barriers to getting ahead in America seem more stringent than ever before.” West adds that the book has a staying power that’s buoyed its success, describing it as “one of those remarkable literary works that seems to adapt to its times.”

The nature of copyright law means that all literary works will eventually enter public domain. The Great Gatsby is certainly not alone in that regard. Works by Edith Wharton, Agatha Christie and thousands of other writers entered public domain in 2019. Next year, William Faulkner and Ernest Hemingway’s first novels will join Gatsby. “The expiration of copyright is inevitable, and it certainly will mean that The Great Gatsby now belongs to the people,” West says. “Whether the book will retain its hold on the American imagination or whether it’ll take new directions with so many editions, I’m curious to see.”

Updated Jan. 6: Tom Brennan’s Bristol theater production was slated to premiere on Jan. 7 but is delayed due to the COVID-19 lockdown. 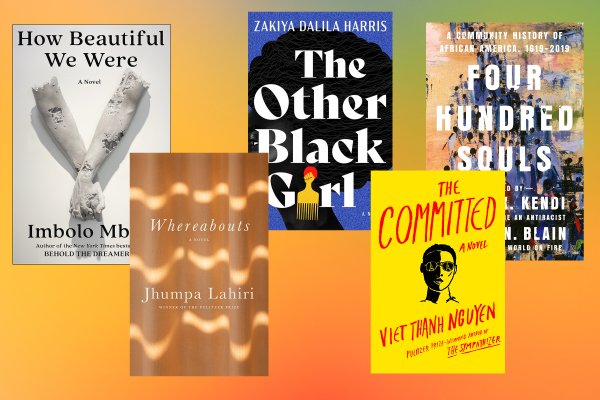 The 21 Most Anticipated Books of 2021
Next Up: Editor's Pick