Ernest Hemingway works at his typewriter while sitting outdoors, in Idaho on Oct. 7, 1939
Lloyd Arnold—Getty Images
By Jennifer Latson

Hemingway didn’t become known as a “literary he-man” without taking a few risks — in art and in life. From his birth on this day, July 21, in 1899, to his death in 1961, he had nearly as many real-life brushes with death as he assigned to his similarly he-manly fictional characters.

He’d been obsessed with death ever since he confronted it — and nearly succumbed to it — on an Italian battlefield during World War I, according to TIME. And although he ultimately died of a self-inflicted gunshot wound at age 61, while suffering from a number of disabling physical and mental illnesses, the idea of facing down death at the hands of an enemy soldier, or on the horns of a bull, had long captivated him and infused his writing. Remarking on his concise but vivid prose, TIME noted in 1961: “Everything in Hemingway is seen as it might be looked at by a man on the day he knew he would die.”

True to his larger-than-life fortitude, Hemingway seemed to court death wherever he went — and to do so with vigorous good humor. Here are some of the many ways he almost went before his time:

1. Shredded by an Austrian mortar shell. During World War I, Hemingway served on the Italian front lines as an ambulance driver with the Red Cross. On July 8, 1918, per TIME, he was “so badly wounded in a burst of shellfire that he felt life slip from his body, ‘like you’d pull a silk handkerchief out of a pocket by one corner,’ and then return. He emerged with 237 bits of shrapnel (by his own count), an aluminum kneecap, and two Italian decorations.”

2. Shot while wrangling a shark. In a 1935 dispatch for Esquire (headlined “On Being Shot Again,” and collected in the book By-Line Ernest Hemingway), Hemingway doles out advice on how best to kill a large animal: shoot it in the brain if it’s close, the heart if it’s far or the spine if you need to stop it instantly. He was inspired to offer these instructions, he writes, “on account of just having shot himself in the calves of both legs” while attempting to gaff a shark on a fishing trip off Key West.

3. Hunting German subs from his fishing boat. During 1942 and 1943, Hemingway spent less time writing than he did aboard his 38-ft. wooden fishing boat, armed with grenades and submachine guns, scanning the Gulf Stream for German U-boats, according to Terry Mort, author of The Hemingway Patrols. Hemingway knew that if he spotted an enemy sub, it was unlikely that the Navy could respond quickly enough to destroy it. “His solution,” Mort writes, “was characteristic: he would attack the U-boat — suddenly and unexpectedly — and then run for it.” Luckily, Hemingway never had the opportunity to put his reckless plan into action.

4 (and 5). Downed in a plane crash—twice. While on an African safari in 1954, Hemingway survived two plane crashes in two days. In the first, a single-engine Cessna carrying Hemingway and his wife crashed when the pilot attempted an emergency landing to avoid hitting a flock of ibises. Forced to choose between “a sandpit where six crocodiles lay basking in the sun or an elephant track through thick scrub,” according to the New York Times, the pilot chose the scrub, and the trio spent the night in the jungle, surrounded by elephants. The next day, the Hemingways boarded another small plane — which crashed and caught fire. Both were seriously injured, although not quite badly enough to warrant the many newspaper headlines reporting their death. Hemingway walked out of the jungle in high spirits, per TIME, “carrying a bunch of bananas and a bottle of gin, and was quoted, possibly even correctly, as saying: ‘My luck, she is running very good.’”

Read a 1954 profile of Hemingway, here in the TIME archives: An American Storyteller

Read next: Read a Hemingway-Era Account of the Running of the Bulls 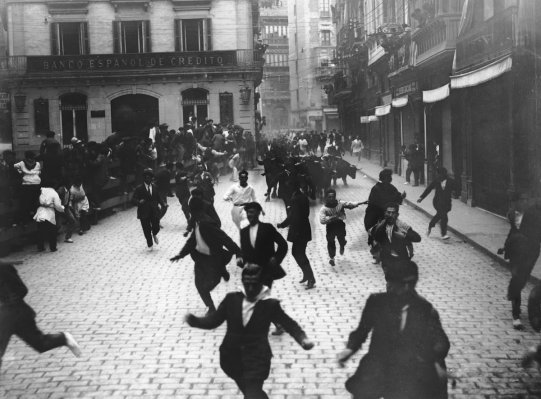 Read a Hemingway-Era Account of the Running of the Bulls
Next Up: Editor's Pick