Protester Ismail Bronson raises his fist at a peaceful demonstration at the Lincoln Memorial in Washington, D.C., on June 2, eight days after George Floyd’s killing.
André Chung
By TIME Staff

It was a long year made to feel longer by the shadows that lay across it, one atop the next, and experienced as a miasma visible as atmosphere in so many of the photographs that define it: The half-light of a temporary morgue. Of a city street obscured by tear gas. Of a wildfire’s traveling dusk.

The news photos that captured 2020 — shown here in TIME’s annual unranked selection of 100 — almost need no time stamp, so distinctive was its look. Here was a year with the palette of an Arctic winter, variations on a darkness that just goes on and on, time suspended first by lockdowns that threw life out of routine, then by the understanding that nothing would be the same after.

No one looking through these images a few years hence will have to ask, when they come to the tableau of a body and people in hazmat on a China street, when that photo was taken. Or what summer two groups of men — one in police uniforms — grabbed the limbs of a young Black protester, surrounded by people in masks. The exception might be the hellscapes created by bushfires, especially the sad, singed animals of Australia. Unless, that is, 2020 is remembered, on top of everything else, as the year the slow burn of climate change officially tipped into conflagration.

What colors the year did produce tended toward the garish hues of America’s political polarization, especially so in images from campaign rallies. But not always.

Here is a pretty street in the Caucasus Mountains. A boulevard, really. The eye is drawn to leaves going gold in the autumn light and to plastic tape the color of peppermint, stretched to form a cordon around something in the road. It is a missile, launched from the enemy side in a war over a patch of disputed territory, and buried right up to its tail fins in the pavement of a residential street, where, in the year 2020, it stands as a symbol of hope. It didn’t explode. — Karl Vick 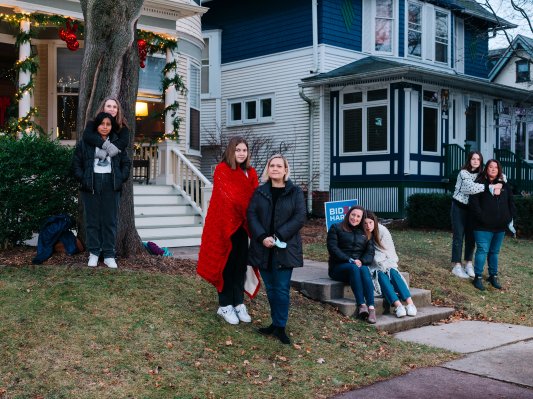