'People Have Been Really Angry.' The Political Journey of a Young Activist in Thailand's Democracy Struggle

Tattep Ruangprapaikitseree, leader of the Free Youth group, takes part during a demonstration in Bangkok on Sept. 24, 2020.
Yuttachai Kongprasert/SOPA Images/LightRocket via Getty Images
By Laignee Barron

He always knew the fight would have consequences. But now, he’s in the crosshairs of Thailand’s most-feared law.

Tattep Ruangprapaikitseree, who also goes by the nickname Ford, has instrumental in the monumental protests that have flared since July in opposition to the military-backed government and the monarchy. It’s a role that has brought him careening into confrontation with the authorities. So far, he’s racked up six charges, including sedition and violating coronavirus restrictions on assembly.

When the 23-year-old activist reports to police Thursday, he will also face accusations of violating lèse-majesté—one of the toughest defamation charges in the world. The provision criminalizes insulting Thailand’s royal family though in practice has been wielded against academics, politicians, journalists, and activists. Violators are liable to up to 15 years in prison.

On a video call from Bangkok, Tattep tells TIME that “The establishment uses [lèse-majesté] to harass and threaten people who call for democracy and reforming the monarchy.” (The government has said it must enforce “all laws” to restore order as the youth-led movement becomes more violent and outspoken.)

Alongside other members of the Free Youth Movement, an online discussion forum he co-founded, Tattep organized a July 18, anti-government rally that drew an estimated 2,500 people—the largest since the 2014 coup.

In the four months since, the movement’s ranks have swelled into one of the boldest uprisings that Thailand has seen in decades. The momentum comes from young, enraged activists like Tattep who have spent much of their lives under military rule. Defying a long-standing taboo, they have dared to openly criticize a monarch their constitution requires them to revere, but one who they see as an impediment to genuine democracy. At the end of last month, demonstrators converged on Thailand’s oldest bank, the Siam Commercial Bank, demanding a financial probe of its largest single shareholder: 68-year-old King Maha Vajiralongkorn, one of the wealthiest and most powerful monarchs on the planet.

Authorities have pressed charges with little success at quelling the growing political challenge. They’ve arrested rally speakers and rolled out water cannon. But on the streets, the call to oust the military-backed prime minister, and rein in the powers of the throne, have reached a fever pitch. Tattep says the crackdown will only “add fuel to the fire.”

“They miscalculated the strength of the protesters,” says Pavin Chachavalpongpun, a Thai professor who works in Japan at Kyoto University’s Centre for Southeast Asian Studies and who was himself accused under lèse-majesté laws in 2014. “What the protesters want this time is a channel for dialogue that will lead to the reform of the monarchy.”

Royalists have accused the protesters of being nation-haters and encouraged a tougher government response. Rumors of another putsch—ever-present in coup-plagued Thailand—have intensified, but the troops have so far stayed in their barracks. Meanwhile Prime Minister Prayuth Chan-ocha, the former junta leader who seized power six years ago, has pledged to intensify action against those who break the law and threaten the “beloved monarchy.” All sides seem to agree the country is barreling toward a breaking point.

Pro-democracy protesters give the three finger salute during an anti-government demonstration in Bangkok, Thailand on November 27, 2020.
Stringer/Anadolu Agency via Getty Images

Why Thais Are Protesting Against Their King

The fuse lit for these protests leads back to what activists see as a military-monarchial choke-hold over public life. Protesters say the crown lends legitimacy to military rule in exchange for the army’s affirmation of the palace’s position as Thailand’s highest moral authority. Since the 1932 revolution, the country has experienced 13 successful coups, with the sovereign playing an important role in endorsing military takeovers. The most recent junta rewrote the constitution last year and retained power in elections that were beset by confusion and accusations of cheating—allegations Prayuth denies. The administration that emerged, stacked with military loyalists, was endorsed by the king.

After assuming the throne in 2016, King Vajiralongkorn consolidated power by bringing military units and crown property under his control, even as he spends much of his time in Germany. The transfer of billions of dollars in royal assets to his personal ownership has stoked considerable scrutiny as Southeast Asia’s second-largest economy—heavily tourism dependent—reels from the pandemic and endures its worst-ever economic contraction.

With so many Thai families struggling, the king’s profligacy has served as a lightning rod for public anger. “People have been really angry about the economy and the inequality,” says Tattep. “But the turning point was COVID.”

The king’s tabloid-worthy personal life has also raised eyebrows. Currently on his fourth marriage (this time to his former bodyguard), Vajiralongkorn has left a trail of acrimonious divorces and disowned heirs. Last year, he became the first monarch in almost a century to appoint a royal consort in addition to his wife. He then dismissed her, before suddenly reinstating her in September. The juxtaposition with his revered father could not be sharper. The late King Bhumibol Adulyadej cultivated a humble “man of the people” image that earned him widespread respect and adulation.

The Political Awakening of Thai Youth

Tattep was just 9-years-old when he witnessed his first coup in 2006. At the time, the army ousted populist Prime Minister Thaksin Shinawatra, accusing him of corruption, and declared martial law. But it would be another decade—and another coup—until Tattep experienced what would serve as his generation’s political awakening.

He grew up in the heart of Bangkok in a working-class family that he said made him aware of his country’s vast inequality. When he was in high school, his mother—the family’s primary breadwinner—died. Tattep began working as a waiter, his father as a driver for a ride-hailing app.

On campus, he befriended fellow politics student Netiwit Chotiphatphaisal—an activist whose refusal to prostrate himself in front of a statue of the late King Rama VI during an induction ceremony became a defining moment of Thai politics. The pair drew inspiration from the Umbrella Movement that had convulsed Hong Kong with its call for democratic elections in 2014. Netiwit went to Hong Kong twice to visit the poster child of city’s protests, Joshua Wong. Later, Netiwit and Tattep invited Wong to Bangkok to speak on campus. But upon his arrival at Bangkok airport, Wong was detained and then deported. The outraged students then staged a demonstration—the first that Tattep had ever attended.

It wasn’t until last year that Tattep was propelled into the spotlight himself. Campaigning for marriage equality on the steps of parliament in December, he kissed his boyfriend, sending shockwaves through the country’s conservative establishment and sparking a homophobic backlash online.

In Thailand, the status of LGBTQ+ rights exposes the disparity between the country’s international image as a socially permissive playground for tourists, and the tradition-bound politics that govern the lives of many locals. While a proposal currently awaiting parliamentary approval would legalize same-sex unions, the bill would still not recognize these partnerships as marriages. Outside of the entertainment and fashion industries, LGBTQ+ representation remains limited.

Within the pro-democracy movement, some dismiss the campaign for gender equality as a secondary fight that can wait until after political reform. But “We can do both at the same time,” Tattep says. “The LGBT are oppressed. If we are fighting for democracy, then we must fight for the oppressed too.”

Thailand's King Maha Vajiralongkorn waves to royalist supporters during a ceremony to commemorate the birthday of his father the late Thai king Bhumibol Adulyadej at Sanam Luang in Bangkok on December 5, 2020.
LILLIAN SUWANRUMPHA/AFP via Getty Images

Indeed, the protests that have erupted this summer have fused a range of causes around the demands to dissolve the government, rewrite the constitution, and end to the harassment of rights campaigners. Joining the students on the streets are feminists, Buddhist monks, labor campaigners, hill-tribe ethnic minorities and Muslim activists.

Legal cases have meanwhile continued to mount against the movement’s figureheads. Among the first batch of five activists to report to police on Nov. 30 over lèse-majesté complaints were human rights lawyer Arnon Nampa, the first speaker to publicly call for reform of the monarchy this summer, and Panusaya Sithijirawattanakul, a student who famously declaimed a 10-point list of demands for monarchial reform. Nine more were summoned on Dec. 8. Tattep and several others have until Dec. 17.

Tattep says the allegation against him stems from a Sept. 24 protest when he spoke about how he saw the monarchy’s expansion of power as threatening democracy. “The king’s decisions are not accountable to the people,” he tells TIME. “We have to talk about this.”

The past four months have opened up unprecedented space for public discussion—even on previously taboo topics like the king—but the young activists realize that there is plenty of struggle to come. “I’m only a small part of a big movement,” says Tattep, undeterred by the task ahead.

“This abnormal regime must end in our generation.” 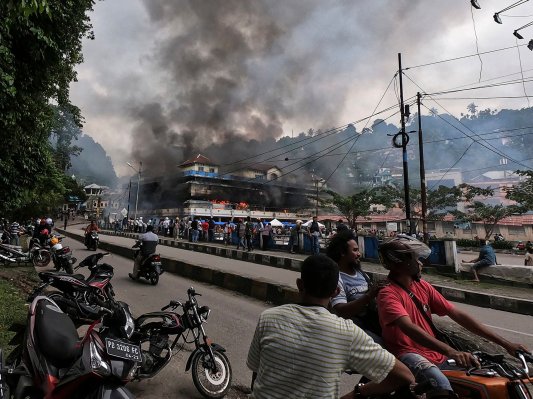 A Fight for Racial Justice in Indonesia's West Papua
Next Up: Editor's Pick