Could a Biden Administration Help Save the Amazon Rainforest?

In place of a traditional message of congratulations, Brazil’s far-right President Jair Bolsonaro met Joe Biden’s 2020 election victory with a strange and provocative message. “We saw recently a great candidate to head of state say that if I don’t put out the fires in the Amazon, he will put up commercial barriers against Brazil,” Bolsonaro said at an event a few days after the presidential race was called for Biden. “How do we deal with that? Diplomacy alone is not enough. When words fail, one has to have gunpowder.”

The apparently flippant threat — a reaction to Biden’s call during a debate in September for Brazil to face “economic consequences” for failing to combat deforestation in the Amazon rainforest — underscores what may become a major fault-line in Brazil-U.S. relations under President Biden.

Last year Brazil’s National Institute for Space Research recorded 2.4 million acres deforested in the Amazon — an almost 30% increase on 2018, the year before Bolsonaro took office, and 2020 has seen record numbers of forest fires. The president simultaneously rejects any blame for the blazes, and argues that the Amazon is a resource the country can and should make money from in order to develop its economy. His critics say that belief has led to a culture of impunity for farmers and other land grabbers who set fires to clear the trees. Attempts by leaders in Germany, Norway and France to leverage economic muscle to force Brazil to take action have been unsuccessful, eliciting little more than barbs from the president. Last year, Bolsonaro told German Chancellor Angela Merkel to “reforest Germany” rather than obsess over the Amazon.

But environmentalists hope the change of administration in the U.S. may play a role in halting deforestation in the Amazon, right when scientists say it is approaching a tipping point from which it can never recover. The loss of Bolsonaro’s hero and ally Donald Trump — who praised his administration’s handling of the Amazon — combined with possible economic consequences for Brazil’s business community will add to international pressure and, maybe, move the needle.

“I have no doubt that the change in administration in the U.S. will have an impact on Brazil’s environmental policy,” says Brazilian congressman Alessandro Molon, who leads the opposition Brazilian Socialist Party in the house of deputies. “Until now, Donald Trump served as a support for the Brazilian president to act irresponsibly. Now with the U.S. adding to Europe’s pressure, Brazil is more isolated and the government will find it harder to stay on this foolish path.”

Molon argues that international pressure is key to protecting the Amazon because while Brazil’s pro-environment opposition have prevented Bolsonaro from changing many rules that protect the rainforest, its congress has been unable to force the government to enforce rules or deploy resources to fight fires. “On the level of action, that’s largely dependent on executive power and the presidential pen that is in Bolsonaro’s hand,” he says. “We have not been able to force his hand. U.S. pressure, adding to Europe’s, could.”

What have the international community tried so far?

The E.U. has been the main source of pressure on Brazil’s government., The Amazon question has become a major sticking point in the ratification of a trade deal between the E.U. and Mercosur — the South American trade bloc of which Brazil is by far the largest member – which has been in the works for two decades. After huge protests by climate activists in Europe, leaders in France, Ireland and Austria said in October they would block the parliamentary approval needed in member states for the agreement to enter into force unless Bolsonaro does more to combat deforestation.

The international community has tried carrots, as well as sticks. In August 2019, the G7 offered Brazil $22m worth of aid to pay for firefighting efforts. Bolsonaro swiftly rejected the money, before accepting a smaller pot from the U.K.

International businesses have also attempted to intervene. In July, 29 global investment firms sent a letter to vice president Hamilton Moraou warning that they would be unable to invest in Brazil in future if there was “an unacceptable risk of contributing to serious environmental degradation or human rights violations.”

Brazil’s government has responded to some of those instances of pressure by announcing temporary bans on setting fires in the Amazon and by deploying the army to help fight illegal deforestation activity. But environmental advocates say the efforts are only a small proportion of what is needed. “The Bolsonaro government tries to pretend to other countries that it’s fulfilling the rules, but it’s doing the minimum,” says Fabiana Alves, Climate and Justice Coordinator for Greenpeace Brazil.

Though Biden’s climate plan does not mention Brazil by name, it does promise to “impose carbon adjustment fees or quotas on carbon-intensive goods from countries that are failing to meet their climate and environmental obligations”. While it’s too soon to say if the new administration will apply those kinds of penalties to Brazil, there are range of trade levers the U.S. could pull, says Lisa Viscidi, director of the Energy, Climate Change and Extractive Industries Program at the Inter-American Dialogue, a think tank focused on relations between Wasgington and Latin America. “It could, for example, try amending existing trade deals between the two countries,” she says. Viscidi cites the renegotiation of a free trade deal between the U.S., Canada and Mexico in 2017, which added new environmental condition after pressure from campaign groups.

The U.S. is Brazil’s second largest trade partner, but American trade pressure may not have a significant impact on the industries that drive deforestation. It is not a major buyer of Brazilian beef and soy, which are exported primarily to China.

As a result, André Nassar, president of oilseeds industry group Aboive, which represents the soy industry, says he does not expect the U.S. to try imposing pressure on Brazil through trade as directly as Europe has. “What I do think will change [with the Biden administration] is that there will be a push within Brazil to get control of illegal deforestation,” he says, differentiating between deforestation for agricultural purposes that is sometimes allowed under Brazilian law, and irregular land grabbing. “If Biden’s rhetoric says, “Brazil, you need to get control of illegal deforestation”, we as the private sector would back that.”

For proof that the business community holds sway on environmental matters in Bolsonaro’s administration, you can look to 2018. Then president-elect, Bolsonaro expressed his desire to follow Trump and pull Brazil out of the U.N.’s Paris Agreement on climate change. Brazilian agribusiness loudly voiced their concerns in Brazilian media about what that could do to Brazil’s image in global commerce, and the country stayed in. “When it becomes clear that there’s a threat to investment, or Brazilian products, the government is going to listen to businesses,” Nassar says.

How else could a Biden administration move the needle?

Brazil’s long held aspiration to enter the OECD – a group of 37 economically developed nations – offers another option for a Biden administration to pressure action on deforestation. Membership would offer Brazil prestige and make it more attractive to investors. In October, Bolsonaro’s economy minister Paulo Guedes said Brazil was on track to join the group with a year and that “two thirds” of the preparatory work had already been completed. U.S. Secretary of State Mike Pompeo supported the bid saying “We want this to happen as quickly as we can.” If a Biden administration uses the U.S.’ weight in the OECD to make Brazilian accession contingent on Amazon protections, that would sharply increase pressure from the country’s business community on Bolsonaro, according to Marcio Astrini, executive director of the Sao Paulo-based Climate Observatory.

Astrini says the real impact of the change in government in the U.S. will be a new dynamic in intergovernmental forums. “Trump has served as a kind of “greater evil” on climate. Brazil might have been a problem, but the U.S. – historically the world’s largest emitter and largest economy – was the focus of the international community and at the U.N.’s climate arm.” Now, with Biden pledging to re-enter the Paris Agreement and the West more united on climate ambitions, and even China promising to drastically reduce its emissions at home, Brazil will be “scandalously isolated,” Astrini says.

A test for Brazil’s new status as center of attention will come in the next year, as all Paris agreement countries are due to announce new national targets for reducing greenhouse gas emissions by November 2021, when the next U.N. climate conference is due to take place in Glasgow. Deforestation accounted for 44% of Brazil’s emissions in 2019.

The Biden administration may also try incentives, rather than penalties, to encourage action by the Bolsonaro government. At the presidential debate in September, Biden suggested that the international community gather $20 billion and offer it to Brazil to protect the Amazon. That message met with scorn from environment minister Ricardo Salles, who asked if it would be a yearly payment.

Viscidi says there are more “positive things” the U.S. can do, though. “It can say to Brazil that there are ways you can have economic development and conserve the forest at the same time and we will support you,” Viscidi says. “But whatever the U.S. does, it has to find a strategy that gets around the dynamic where Brazil sees protection of the Amazon purely as a violation of their sovereignty. That’s the key to stopping deforestation.” 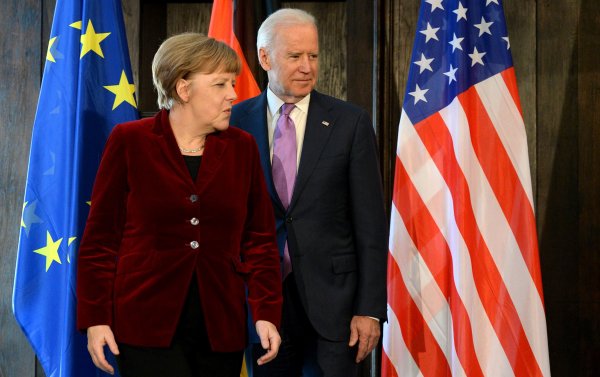 EU Diplomat Says Europe's Relationship with US Is Forever Changed
Next Up: Editor's Pick