How Donald Trump Lost The Election

It all finally caught up to him. The lies, the outrageous boasts, the disorder and disastrous management, the rants and the race-baiting, the predatory instincts and compulsion to dominate—all the things that made President Donald Trump the ringmaster of the American political circus at last compelled a majority of voters to drive him out of the tent.

Few other Presidents in modern history so inflamed the nation or exposed the cracks in our democracy as Trump. In the end, Trump’s pride didn’t just precede his fall, it precipitated it. Until the final months, his campaign was managed by a novice who burned through millions of dollars. Trump thought he could wish away a deadly virus. He dismissed his legions of critics, preferring to bask in the adulation of fans. He governed as President only of his base, and he ran for re-election without pivoting toward the center. He barely articulated a policy vision for a second term. He campaigned hard, jetting to dozens of rallies on Air Force One in the final weeks of the campaign, and outperforming the expectations of many thanks to a formidable ground game, a sophisticated campaign data operation and a passionate base of support.

But in the end, the Trump presidency ended much as it began: with a thin margin in key states separating two candidates in an anxious nation, and Trump appealing to America’s demons over its better angels, hurling baseless claims that he’d been robbed.

President Trump and the First Lady enter the East Room of the White House on Nov. 4, to deliver remarks as results of the election remained unclear.
Peter van Agtmael—Magnum Photos for TIME

Trump’s presidency was marked by scandals and controversies as varied as they were alarming. He refused to face the roots of the country’s racial disparities and doubled down on a message of white grievance. One of the dominant political trends of his tenure was the exodus of suburbanites, white women, college-educated voters and independents from the Republican Party.

His prospects for re-election were dragged down by a pandemic that exposed his weaknesses along with ours. Chief among them was his reckless approach to a virus that landed him in the hospital at the peak of the campaign. “If the President never gets COVID, he wins the election. Our polling showed a significant dip when that happened, particularly with suburban, college-educated, non-liberal men,” says GOP strategist Brad Todd. “Trump getting COVID sent a signal to those people that his management style had consequences even for him personally and was therefore unlikely to change.”

Presidents’ legacies are formed in the crucible of great challenges. When COVID-19 hit, Trump pulled open the tears in our national fabric even wider. Just before Election Day, as the U.S. suffered its worst spike in cases since the pandemic began, Trump mocked the virus as a media conspiracy. “Fake News Media is going full on Covid, Covid, Covid,” he tweeted on Oct. 27. “We are rounding the turn.”

The voters knew better. Over the course of an extraordinary election year, more than 235,000 Americans died, and more than 9 million were infected. The crisis called for a President who could be tough and empathetic, put forth concrete plans to deal with it and mourn with American families who had lost loved ones in lonely hospital rooms.

Trump was defeated because of his “failure to connect on the thing that voters most cared about, which was coronavirus,” says Sarah Longwell, founder of Republican Voters Against Trump (RVAT). While legions lost jobs, closed businesses, refrained from hugging their aging parents and homeschooled their children, “what Trump did was decide to pretend like coronavirus wasn’t the most dominant thing in people’s lives,” Longwell says. His blithe dismissals may have turned off seniors, a core component of his fragile coalition particularly susceptible to the virus: he lost 4 points among this age group compared to his 2016 performance, according to CNN exit polls as of Nov. 7.

Press outside of the White House the eve of the election, Nov. 3
Peter van Agtmael—Magnum Photos for TIME

How lasting the changes Trump has wrought for our democracy remains to be seen. The rifts he created will not be easy to repair. The 2020 election proved there remains a strong market for the grievance-fueled politics he’s selling: even in defeat, Trump won millions more votes than he did four years ago. It was hardly the abject repudiation of Trump’s ideas and methods his opponents had envisioned. But in the end, a majority of America’s voters made the choice to move on.

One key mistake of Trump’s re-election bid came nearly three years ago, when he hired Brad Parscale as his campaign manager. A digital guru, Parscale ran a social media advertising blitz on Facebook that helped Trump win in 2016. But Parscale was also a political novice who had never managed a campaign, let alone one for an incumbent President with a perilously narrow path to re-election. Parscale spent lavishly, burning through hundreds of millions of dollars and frittering away a sizable cash advantage. When former New York City Mayor Michael Bloomberg bought a Super Bowl ad to promote his own short-lived presidential campaign, the President’s team shelled out $10 million for Trump’s own. “Brad had never run any campaign before,” says Mike DuHaime, a veteran Republican strategist, and “to suddenly put him in charge of a billion-dollar operation I think is unfair and a bad decision.” Parscale says the campaign budget and his spending was approved by several other senior campaign leaders. “You can disagree with my strategy or my budget, but saying I didn’t have one is ridiculous. It’s a flat out lie,” Parscale, who did not initially respond to a request for comment, told TIME Nov. 7. “I had a clear and concise budget that was approved by multiple people,” Parscale says.

Protesters drive in a caravan of cars that descended on the Maryland statehouse in Annapolis on April 18, during the Governor's stay-at-home order.
Peter van Agtmael—Magnum Photos for TIME

The bigger problem was Stepien’s client. Trump lost the national popular vote by nearly 3 million in 2016, but never attempted to expand his support beyond his hard-core base. Instead he tried to find new voters—most of them non-college-educated white men—who were attracted to his divisive, often racially inflammatory style. He lost the popular vote by a significantly wider margin—the count is still going—after making a series of unforced errors that eroded his support in what became decisive states. Biden flipped Michigan, Wisconsin and Pennsylvania, the three states that delivered Trump the presidency in 2016. Trump lost Arizona, according to the Associated Press, after feuding with the state’s favorite son, the late Republican Senator John McCain. If he loses Georgia, which hadn’t been called as of Nov. 7, it will be in part because of strong Democratic turnout around Atlanta, in the district formerly represented by the late Congressman John Lewis, whose civil-rights legacy Trump dismissed.

Amid a nationwide uprising over systemic racism, Trump denied the underlying issues. He never attempted to unite the country or speak to its shared pain. On June 5, less than two weeks after the killing of George Floyd, and with the nation gripped by Black Lives Matter protests, Trump held a rambling press conference in which he touted a strong jobs report. “Hopefully George is looking down right now and saying this is a great thing that’s happening for our country,” Trump said. “This is a great day for him. It’s a great day for everybody.” Polls showed that a majority of voters disapproved of Trump’s handling of the protests, and it cut into his support among white voters who had lifted him to victory last time.

Trump rally attendees wait for the President to arrive at the BOK Center in Tulsa, Okla., on June 20
Peter van Agtmael—Magnum Photos for TIME

By midsummer, when Americans had lived circumscribed, fearful lives for months, many of the voters who had supported Trump in 2016 had soured on his leadership. “It’s a ‘don’t care’ attitude,” a woman in Ft. Lauderdale, Fla., said in a focus group hosted by RVAT in July, which TIME observed. “This is a time in crisis. You’re supposed to be with us. And I can’t see it.”

At the start of the year, the President’s advisers saw the economy as his strongest argument for re-election. When it cratered because of the coronavirus, his campaign tried to paint him as the best person to bring the economy back. With high unemployment and 12.6 million people still out of work by September, that may have been an impossible task. “The coronavirus ended the economic sugar rush,” says Timothy Naftali, a historian at New York University. “That was his undoing.”

In any case, Trump didn’t stick to the script. His closing campaign argument was a litany of grievances—-against the media, against Dr. Anthony Fauci, against the phantom “fraud” of mail-in voting, against the hard reality of increasing COVID-19 case counts. He refused to see the writing on the wall in the final days of the vote count, dangerously spreading unfounded allegations of wide-spread voter fraud and baselessly claiming that Democrats had tried to “steal” the election.

What voters heard was a candidate focused on his own problems, not theirs. “There’s been a compassion deficit disorder with Donald Trump,” says historian Douglas Brinkley. It was a deficit Trump proved he couldn’t fill.

Protestors gather at Black Lives Matter Plaza as fireworks explode above the Washington Monument on the fourth night of the Republican National Convention on Aug. 27
Peter van Agtmael—Magnum Photos for TIME

As Election Day approached, Trump turned to the vast federal apparatus he controls to save him, crossing more of the lines for which he had been impeached in 2019.

He conscripted federal agencies as foot soldiers in his campaign, pressuring the Food and Drug Administration and Centers for Disease Control and Prevention to alter their COVID-19 recommendations in his effort to downplay the pandemic. He leaned on the Justice Department to help his allies and investigate his political foes. Starting in July, his Postmaster General, Louis DeJoy, implemented sweeping changes that slowed delivery just as millions of voters were casting ballots by mail. Trump used federal agents to clear racial-justice protesters from Lafayette Square in Washington, D.C., confront protests in Portland and deploy to “Democrat-run” cities to paint a portrait of anarchy.

“Trump regularly wanted to use our law-enforcement authorities in a way that he thought would be politically beneficial to him and especially damaging blue states and cities,” says Miles Taylor, former chief of staff at the Department of Homeland Security, the author of an anonymous 2018 New York Times op-ed that castigated his leadership.

These failures have made Trump the one thing he was raised to fear most: a loser. Early in his life, Trump attended the Manhattan church of Norman Vincent Peale, the evangelist who preached self-realization and wrote the 1952 best-selling book The Power of Positive Thinking. But in politics, his talent was for channeling anger and resentment.

“Losing is never easy,” Trump mused at his campaign headquarters on Election Day. “Not for me, it’s not.” For a man who has craved praise above all else, being the first President in nearly 30 years to be cast aside after a single term is surely a difficult blow. His ego may be bruised. But bearing its own wounds, the country is now faced with the challenge of how to heal.

—With reporting by Molly Ball, Mariah Espada and Abby Vesoulis 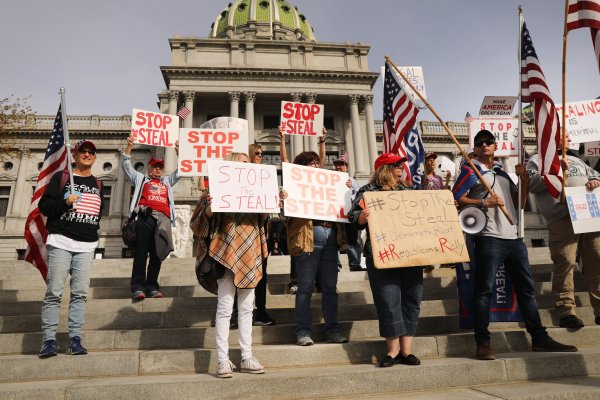 Here Are The Recent Trump Campaign Lawsuits
Next Up: Editor's Pick