Tensions Simmer Between Brazil and Europe Over Amazon Deforestation

A tract of Amazon jungle burning as it is being cleared by loggers and farmers in Amazonas state, Brazil on Aug. 20.
Bruno Kelly—Reuters
By Ciara Nugent

A fight is brewing over the lungs of the planet. Since taking office in January, Brazil’s far-right President Jair Bolsonaro has overseen a surge in logging in the vast Amazon rain forest–and on Aug. 15, Norway suspended a $33 million donation to a Brazilian sustainability fund because Bolsonaro had interfered in it; Germany froze its payment five days earlier. Bolsonaro responded with mockery, telling the Europeans to go “reforest Germany” instead, but what may lie ahead is no laughing matter.

Bolsonaro has delivered on campaign promises to weaken protections for the environment and indigenous communities, freeing up more land for cattle. Over 870 sq. mi. of the Amazon was cleared in July–a 278% increase from July 2018–according to satellite monitoring by Brazil’s space-research agency. Scientists say the rain forest, which helps slow climate change by absorbing massive amounts of carbon dioxide, is nearing a “tipping point” after which its ecosystems cannot recover.

The governors of Brazilian states that contain the rain forest have vowed to bypass Bolsonaro and negotiate directly with European embassies to save the Amazon funding. But the rapid deforestation is also fueling European opposition to a long-awaited trade deal between the E.U. and a South American trade bloc of which Brazil is the largest member. The deal would need to be ratified by the E.U.’s member states and Parliament, where green parties won a significant 69 seats in May.

Europe’s environmentalists hope their leaders will use “climate diplomacy” to force Bolsonaro to protect the Amazon. But it’s unclear if he’d listen. On July 29, he canceled a climate-policy meeting with France’s Foreign Minister in order to get a haircut. The next day, President Donald Trump–who is trying to free the U.S. from its climate obligations–said he’d pursue a Brazil trade deal. Unlike the Amazon, the obstacles to climate action show no sign of shrinking. 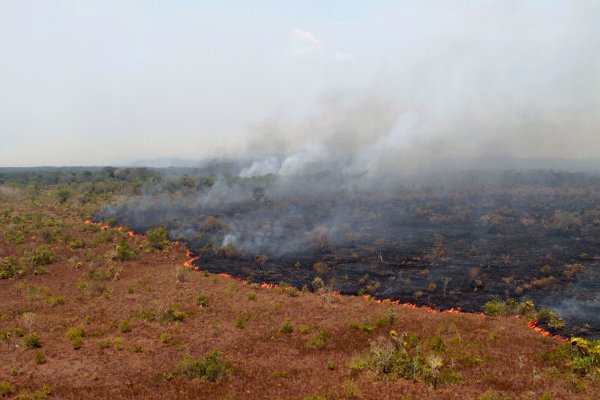 A Record Number of Fires Are Currently Burning Across the Amazon Rainforest
Next Up: Editor's Pick