The freezer in your kitchen likely gets down to temperatures around -20° C (-4° F). “That keeps your ice cream cold, but it doesn’t turn your ice cream into an impenetrable block of ice,” says Paula Cannon, an associate professor of molecular microbiology and immunology at the University of Southern California’s Keck School of Medicine.

Pfizer’s promising COVID-19 vaccine, by contrast, must be stored at about -70° C (-94° F)—a temperature cold enough to harden ice cream into a spoon-breaking block of ice, and that only specialized freezers can produce.

Those cold storage requirements are raising serious questions about who could get the Pfizer vaccine if it’s approved, and when. The reality, experts say, is that the Pfizer vaccine probably won’t be available to everyone, at least not right away. Large medical centers and urban centers are the most likely to have the resources necessary for ultra-cold storage. People without access to these facilities, such as those living in rural areas, nursing homes and developing nations, may have to wait for other vaccines working their way through the development pipeline.

Pfizer’s vaccine candidate, which has not yet been approved by the U.S. Food and Drug Administration but is reportedly 90% effective at preventing COVID-19, uses genetic material called mRNA. If it’s not kept at extremely cold temperatures, mRNA can break down, rendering the vaccine unusable.

If the Pfizer vaccine is kept at -70° C, it can last up to six months. But many hospitals, to say nothing of community medical offices and pharmacies, do not have ultra-cold freezers, which cost around $10,000 up front and are expensive to run because of their high energy usage. Retrofitting existing freezers to reach these temperatures isn’t possible either, Cannon says. “It would be like going from a Fiat car to a Tundra truck”—the technology and energy requirements are simply different.

There may also be shortages of the type of pharmaceutical-grade glass needed to make vials that can withstand such cold temperatures, says Dr. William Moss, executive director of the International Vaccine Access Center at the Johns Hopkins Bloomberg School of Public Health. New York-based glass company Corning won a $204 million government grant in June specifically so it could increase production of its sturdy glass, which is made without boron.

Distributing the vaccine will also be difficult, since it must remain frozen during shipping. Pfizer has built a storage container that, with the help of dry ice, can keep doses cold for up to 10 days in transit without any additional freezer equipment. Periodically replenishing the containers with dry ice can buy another 15 days, but depending on how often the containers are opened, and for how long, that timeline could be considerably shorter. (Dry ice is also in short supply right now because of the increase in food delivery during the pandemic, combined with the fact that fewer people are driving and buying gas, driving down the ethanol production required to make dry ice.)

Once they’re out of the box, the shots can last for about five days in standard refrigeration. But the boxes hold from 200 to 1,000 vaccine vials, each of which contains about five doses of the shot—more than most doctor’s offices could reasonably expect to use before some doses start to defrost and become useless, as ProPublica recently reported.

A Pfizer spokesperson told TIME that the company “is committed to ensuring everyone has the opportunity to have access to our vaccine working closely with local government.” The spokesperson added that global distribution has gone smoothly during clinical trials, and that portable and under-the-counter-sized ultra-cold freezers are available for smaller vaccination sites.

“We believe all countries will be able to effectively dose patients even with our cold chain requirements,” the spokesperson said.

For mass U.S. distribution, Cannon says the most practical solution may be setting up large, centralized vaccination centers that could rapidly go through doses, rather than trying to get the jab into every doctor’s office and pharmacy nationwide. The U.S. Department of Health and Human Services on Nov. 12 announced it will work with pharmacies nationwide to distributes COVID-19 vaccines for free, but it’s not yet clear which vaccines will be available through that partnership.

Some states are considering large vaccine depots, as indicated by their draft plans for vaccine rollout sent to the CDC, but such centralized hubs require additional staff, equipment and cost that some states can’t afford. Plus, in rural areas, reaching a “centralized” location may still require lengthy travel for some people. The Pfizer vaccine must also be given in two separate doses, which could be a hard sell to people who have to drive hours to get it.

Moss adds that those who need the vaccine most—like the elderly and those with prior health conditions—may be the least able to travel to get one. And distributing an ultra-cold vaccine may be a pipe dream in countries poorer than the U.S., Moss says.

“It would be extremely challenging, if not impossible, to get such a vaccine out to, say, countries and people in Sub-Saharan African and many parts of Asia, where the infrastructure is not what we have in the United States,” he says.

Pat Lennon, who oversees cold-chain storage at the global health nonprofit PATH, says ultra-cold vaccines were distributed during the recent Ebola outbreak in the Democratic Republic of the Congo, but that was an easier feat, since the virus did not spread as widely.

Moss says he’s not overly concerned about distribution challenges, at least right now. Pfizer’s COVID-19 vaccine is one of many currently in development, and “I don’t have any reason to think this Pfizer vaccine is special in such a way that its efficacy is going to be substantially higher than another vaccine,” Moss says. (Time will tell, of course, exactly how the efficacy and availability of the different shots stack up.)

Many of the other vaccine candidates currently going through clinical trials do not have such stringent cold-storage requirements. Pharmaceutical companies Moderna, Johnson & Johnson and AstraZeneca have all said their COVID-19 vaccine candidates could be kept at temperatures of -20° C or above, which should make distribution easier.

Cannon adds that Pfizer and other vaccine makers may refine their formulas over time. Some other vaccines, such as those for measles and yellow fever, are shipped in a freeze-dried format and reconstituted with water before they’re administered. Something similar may be possible for COVID-19 vaccines in the future, Cannon says. The Pfizer spokesperson says the company hopes to release a COVID-19 vaccine that could be stored at temperatures between 2-8° C in 2022.

But for now, people should be prepared to wait awhile before life returns to normal. Even once vaccines are available, it will take time to achieve the widespread inoculation required to stop the virus from spreading unchecked. “I would say a best-case scenario may be toward the end of 2021,” Moss says. “But it’s going to depend on not just vaccine availability and approvals, but the willingness of people to accept the vaccine. There’s a whole other challenge and layer there.”

In the meantime, the best tools are the ones we’ve already got: social distancing, wearing masks and washing your hands. 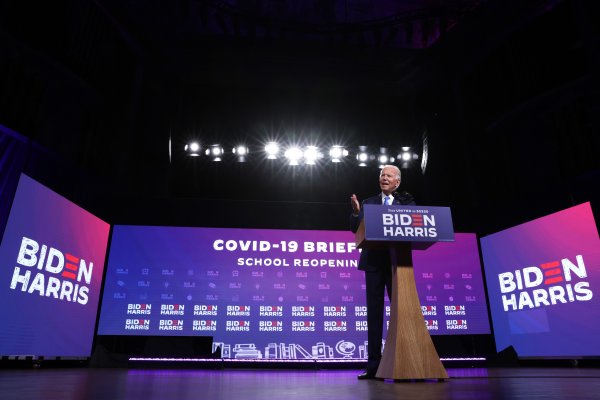 How Joe Biden Could Fix Pandemic Schooling
Next Up: Editor's Pick