COVID-19 Is Still Devastating Nursing Homes. The Trump Administration Isn't Doing Much to Stop It

At least 75,000 Americans in nursing homes and other long-term care facilities have already died from COVID-19—and the devastation is far from over. After a decrease earlier this summer, the death toll is now rising once again, and as the country heads into the fall and then flu season, millions of Americans who require institutional long-term care remain at the greatest risk.

But, so far, the Trump Administration has talked a big talk—and mostly failed to deliver.

The White House trumpeted its efforts to send personal protective equipment (PPE) and testing materials to long-term care facilities, but the supplies that actually arrived have been limited in quantity and sometimes unusable. The Centers for Medicare and Medicaid Services (CMS) ramped up its requirements for how often nursing homes must test staffers and residents, but has so far failed to ensure that facilities will have access to all the test kits they need. And this week, Senate Republicans crowed about their scaled-back version of a coronavirus relief bill, but it did not include any funding specifically for long-term care facilities, among the hardest-hit places in the country.

The government’s failure to prioritize those in need of long-term care has stymied nursing homes and other facilities in the Midwest and South, where infection rates are high. Industry experts say the Trump Administration’s moves are making it more difficult for facilities to implement lessons learned from previous surges in New York, Massachusetts and Michigan, thus failing to prevent a wave of new nursing home deaths and causing some nursing homes to close their doors.

“It’s pretty frustrating and disappointing,” says David Grabowski, a professor of health care policy at Harvard Medical School. “We really had many opportunities, and still do, to address COVID in nursing homes, and yet we haven’t made it a national priority.”

A ‘dismal failure’ to coordinate a federal response

From the first outbreak at a Seattle-area nursing home in March, it’s been clear that the pandemic would hit hard in long-term care facilities, where residents, who are often older and sick, or unable to care for themselves, are among the most vulnerable to COVID-19. The nature of congregate settings and the staff required to care for residents also makes transmission common.

In the early months of the pandemic, many long-term care facilities—which already struggle with understaffing and infection control in normal times—scrambled to learn about the coronavirus along with scientists and the rest of the public. But since then, research has shown that infection spreading in the community is the biggest factor in predicting outbreaks in nursing homes. And what needs to happen to keep nursing home residents safe is no longer a mystery.

Studies have shown that higher levels of staffing are associated with a lower probability of experiencing an outbreak and fewer deaths, since facilities with more staff are able to limit their contacts, handle new COVID-related tasks and replace those who get sick. Facilities must also to be able to access PPE and test workers and residents frequently, in order to avoid spreading the virus and quarantine those infected. But right now, meeting any of those criteria is difficult: facilities are struggling to recruit and retain staff, PPE availability has improved but not consistently, and testing remains a nightmarish patchwork that takes time and money to navigate.

“We have seen a really dismal failure at the federal level to secure the supply chains that we need,” says R. Tamara Konetzka, a research professor at the University of Chicago who testified before Congress in May about the effect of COVID-19 on nursing homes. “It takes a coordinated effort by policymakers, and it’s hard to imagine that’s all of a sudden going to happen and happen quickly.”

The Department of Health and Human Services appears to be acknowledging that procuring supplies is still an issue. It announced on Tuesday that it is sending some 750,000 point-of-care COVID-19 tests made by manufacturer Abbott to nursing homes next week, which they will be able to use at their facilities.

These antigen tests, which the department is providing for free, will add to a previous round of antigen testing machines, made by BD and Quidel, that it started sending out to nursing homes last month. HHS has now distributed more than 13,400 of those testing machines along with a limited supply of tests, Assistant Secretary for Health Admiral Brett Giroir said on a Tuesday call with nursing home administrators and industry leaders.

But while the nursing home leaders on the call applauded HHS’s moves, many expressed repeatedly that the government’s supplies were not enough. Several nursing home leaders said they did not have an adequate number of tests or staff to keep up with the Trump Administration’s new requirements, which it announced last month. It was a sentiment repeated at a press conference held on Wednesday by LeadingAge, a trade group for non-profit senior care providers across the country.

The Administration’s new testing schedule assigns counties to “green,” “yellow” or “red” categories based on their rate of positive COVID-19 tests, and requires that nursing homes test their staff as often as twice weekly depending on the severity of their location. They must also test all residents during any outbreak or whenever a new COVID-19 case is identified. Facilities can face steep fines if they don’t comply and must keep up with testing to receive Medicare and Medicaid reimbursement, which are the industry’s main source of income.

Those requirements are fine in theory, industry experts say, but they don’t reflect the reality on the ground. If nursing homes test at the required frequency, the supply of free tests provided by HHS will run out rapidly. Long-term care facilities, which are often financially stretched, will be required to purchase more tests on their own.

One participant on the Tuesday call asked Giroir, CMS Administrator Seema Verma and other officials if they could offer guidance on how to meet the regulations and “stay financially afloat.” The participant said her facilities, which are located in a “red” county, would run out of testing supplies within a week and a half, and that she was worried about the time it would take her staff to conduct all the necessary tests.

“We don’t have the staff barely to keep going, much less meet these requirements. So I would love your input,” she said, her voice breaking with emotion.

Giroir responded that the new Abbott tests should help cover about half of that testing burden for facilities in “red” counties, and that while the exact distribution pattern is still being worked out, those shipments would continue weekly through November or December. But Giroir also said that HHS’s commitment to supply nursing homes was “indefinite.”

“As we transition to the free-market structure, we know you’re going to have a couple of weeks of instability as we get the distribution channels down,” Giroir said on the call. “We’re going to work with you on that, and you have our commitment that we’re going to do what we can to make this seamless.”

Experts and nursing home administrators say they’re skeptical of the government’s plan. Harvard’s Grabowski says that the idea of a “free-market structure” doesn’t work for nursing homes, which rely on Medicaid and Medicare for most of their money. “The idea that they’re going to compete with many other individuals in need of testing out there, from schools to workplaces, you name it—that’s gonna really put residents and their staff at risk,” he says.

Grabowski and other experts say that frequent testing is necessary to contain the spread of COVID-19, but he agrees with long-term care providers that they’ll likely need more support to keep up. He recently co-authored a paper in the journal Health Affairs that showed one in five nursing homes still report “severe” shortages of PPE and staffing. And as long-term care providers need to do more testing, their financial situation will grow more precarious.

The staffing issue is even thornier. Nursing homes typically operate on thin margins, and long-term care workers—mostly poor women of color—are underpaid and overworked in the best of times. During the pandemic, staffers have been falling ill themselves, staying home to care for family members or children who are attending school remotely, and leaving the field for less dangerous jobs. While Congressional Democrats pushed for hazard pay for frontline workers this spring and included it in their relief bill that passed the House in May, no federal plan has been approved. Without specific money dedicated to worker salaries, long-term care facilities say they can’t hire the staff they need.

A recent survey from the American Health Care Association, which represents for-profit long-term care providers, found that 72% of its members say they can’t keep operating another year with their current increased costs and revenue loss, while 40% said they cannot last another six months. LeadingAge said on Wednesday that it already knows of three member institutions that are closing due to coronavirus-related costs, and that others are spending tens of thousands each month on testing and PPE.

If the current situation continues without a truly concerted federal assistance plan, said Katie Smith Sloan, president and CEO of LeadingAge, “the care that our members provide is simply unsustainable.” 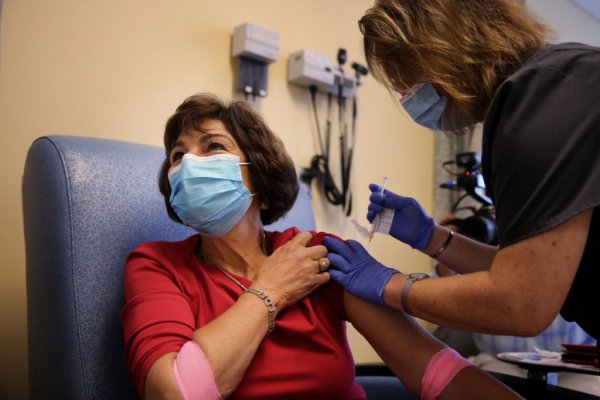 62% of Americans Worry Trump is Rushing a COVID-19 Vaccine
Next Up: Editor's Pick