For many Americans, one of the more pressing domestic issues a Biden-Harris administration needs to tackle upon their inauguration in January is that of criminal justice and police reform. A hot-button issue during much of the presidential campaign, calls for action at the federal level have been at the front of public consciousness since the killing of George Floyd in May.

In recent months, President-elect Joe Biden and Vice President-elect Kamala Harris have both been outspoken on this year’s outpouring of racial turmoil, with Biden calling for “racial justice” in a taped segment during Floyd’s funeral in June. Harris has also spoken critically of high-profile incidents of police violence against Black civilians.

But for community leaders and activists in cities where many of this year’s high-profile incidents of police violence took place, what they want from a Biden administration and what they are expecting are two starkly different things. In terms of meaningful legislation, their expectations are not very high.

“I don’t see systemic change coming from the new administration,” Devren Washington, an organizer and activist in Philadelphia tells TIME. “It’ll be a hard fight to get any top-down reforms from the Biden administration when it comes to policing.”

The issue has already become a cause of contention within the Democratic party since Election Day. With Democrat candidates falling short in many congressional races, some lawmakers have argued terms like “defund the police” negatively impacted moderate incumbents’ chances. Most notably, House Majority Whip James Clyburn has said that the term is “killing our party.”

Progressive members of the party, like Rep. Alexandria Ocasio-Cortez, have pushed back, arguing that those failures were a result of poor campaigning and noting the relevance of police reform to many communities and districts who turned out in large numbers for Biden.

The intra-party divide among lawmakers mirrors a larger cultural split. “Policing across the nation is one of the reasons why we’re so divided,” Keturah Herron, an organizer with the Kentucky American Civil Liberties Union (ACLU) says. “[The Biden-Harris administration] has to take immediate action to help heal communities that have been overburdened by over-policing. Police officers have to be held to a higher standard than regular citizens.”

“If we’re talking about criminal justice reform, then show some justice,” adds Marjaan Sirdar, an activist in Minneapolis, where George Floyd was killed, says. “We’re here because people have been denied justice.”

Herron, Sirdar and many others want to see more federal prosecutions of police officers who commit crimes and civil rights violations, more investigations into local police departments for systemic wrongdoing and a mandate for leaders in the federal government to better engage with residents and activists in communities that are victimized by police violence.

“[Biden] really needs to consult meaningfully with civil rights groups, lawyers, activists and advocates who have been working on these problems for a very long time,” Professor Michael Avery, the former president of the National Police Accountability Project says. “It’s time for their voices to be heard.”

And activists also worry that, even if the Biden administration championed bold legislation to address systemic issues, a Republican-led Senate would stymie any “progressive” laws. The GOP is “a great opposition party and they will jam up the Democrats. They will prevent any sort of progress” says Sirdar. “The Democrats have proven that they are unable to fight [back].”

Biden himself has stated publicly that he does not agree with “defunding the police.” Instead, he has proposed giving police departments more money to invest in training, technology and community policing. He does believe that officers should have a medical professional with them when they are called for certain emergencies, like mental health incidents similar to that which precipitated the recent police killing of Walter Wallace Jr. in Philadelphia.

Minus the top-line slogan, this is actually a set of policy goals and reforms many leaders in the movement for police reform champion.

“I think defunding the police will hurt those communities who need help the most. Improving criminal justice, reducing harm, and improving people’s lives more generally can’t be accomplished by shuffling resources around—these communities need more resources ” Professor Cynthia Lum, Director for the Center for Evidence-Based Crime Policy at George Mason University, tells TIME. “I do not think places suffering from crime want less of the police. But they want a higher quality of policing.”

Alongside such calls for widespread federal investment in disenfranchised minority communities, activists would also like to see the decriminalization of certain drug offenses, financial backing for grassroots organizations and moves toward divesting from the federal prison system.

And Election Day saw some significant wins for criminal justice reformers: laws increasing police oversight passed in cities including Portland, Oregon, Pittsburgh, Penn. and Columbus, Ohio. The recreational use of marijuana was legalized in Arizona, New Jersey and South Dakota, while Oregon became the first state to decriminalize small amounts of heroin, cocaine and other drugs.

In California, the passing of Proposition 17 means that parolees will, in the future, be able to vote.

So while holding the federal government accountable is crucial—and while they continue to call for new national standards and laws—activists believe progress is most likely to continue at the state and local level, where people’s voices can truly be impactful.

“Regardless of who is in leadership, the work for us is the same on the ground,” Herron says.

The original version of this story misstated Keturah Herron’s last name. It is Herron, not Heron.

Most Popular on TIME
1
Who Should Be TIME’s Person of the Year for 2020? Vote Now
2
The 10 Best Nonfiction Books of 2020
3
What to Know About Hillbilly Elegy 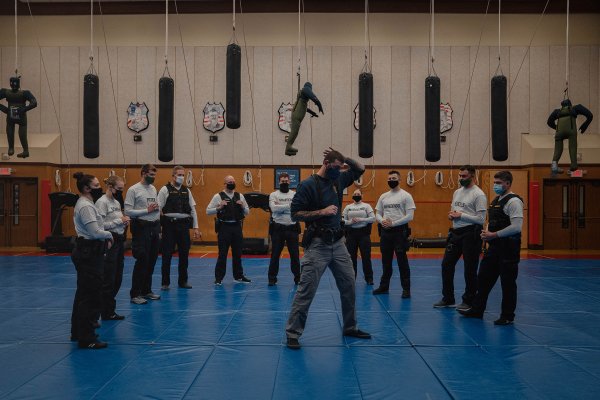 The Problem With Outsourcing Police Training
Next Up: Editor's Pick