People in Parts of Myanmar Are Living Under the World's Longest Internet Shutdown. It's Putting Lives in Danger

A family displaced by armed conflict between the Myanmar military and the Arakan Army sits at a temporary shelter in Hlegu Township on the outskirts of Yangon on June 25, 2020.
Shwe Paw Mya Tin—NurPhoto/Getty Images
Ideas
By Kyaw Hsan Hlaing

Kyaw Hsan Hlaing grew up in Myanmar’s conflict-torn Rakhine State where his family and friends are among more than 1.4 million people affected by a prolonged internet ban. In place since June 2019 in parts of Rakhine and neighboring Chin State, the ban was imposed by the government amid escalating fighting with an ethnic armed group. Human rights groups have criticized the shutdown for hampering access to information about COVID-19, as well as making it harder to distribute food and medical aid to civilians displaced by the conflict. This story was supported by the Pulitzer Center.

I first accessed the internet in 2014. I was 18 years old and living in my family’s home in Myanmar’s westernmost Rakhine State. After a half-century of isolation during the military junta, my country was finally opening up.

At the time, I had never traveled farther than 20 miles from my village. But when I bought my first cell phone and SIM card I could see images of distant places and access international news sites for the first time. I realized how little I knew about the world.

Thanks to the internet, my childhood friend Nyi Htay and I dreamed of new opportunities for ourselves. We vowed to study abroad and return to open a school in our township.

Instead, in December 2018 I took a bumpy 24-hour bus ride to Yangon, Myanmar’s largest city, to continue my education. Nyi Htay stayed to work on his family’s farm.

Our lives have continued to diverge since, due in part to the world’s longest internet shutdown.

Today, as I advance my studies of political science, Nyi Htay’s hopes are diminishing under government-imposed restrictions and escalating conflict.

Violence has long scarred my home state. When I was in high school, inter-communal riots erupted between the Buddhist Rakhine community to which I belong and the Muslim Rohingya, resulting in mass displacement, primarily of Rohingya communities.

Rakhine again caught global attention in 2017 when the military committed a campaign of arson and violence against the Rohingya, sending more than 740,000 fleeing across the border to Bangladesh. I strongly condemn these atrocities, for which Myanmar is now facing charges of genocide at the International Court of Justice.

Since late 2018, another conflict has flared—this time between the Myanmar military and the Arakan Army, an ethnic armed group fighting for greater autonomy. It is the most recent of more than seven decades of civil war in Myanmar, as various ethnic groups have sought self-determination. In the last two years, this conflict alone has displaced over 240,000 civilians and hundreds have been wounded or killed by gunshots, landmines and airstrikes, according to a local civil society group.

As the military turned its attention toward my ethnic group, the government headed by Nobel Peace Prize laureate Aung San Suu Kyi imposed an internet blackout on nine townships. Beginning on June 21, 2019, it affected more than 1.4 million people living in the middle of a conflict zone.

Although 2G services were restored this August, 3G and 4G networks remain blocked in all but one of the affected townships, leaving people unable to perform a basic internet search.

The government says these restrictions aim to hinder the activities of the Arakan Army, but it has also imperiled the safety of many civilians who lack access to vital information. This became apparent to me in May, when more than 190 homes were burned seven miles from my village and my family called me, afraid. They saw pillars of smoke but lacked access to quick, verifiable information. They wanted to know where to go for safety.

Read more: ‘We Cannot Believe Aung San Suu Kyi’: Why Many in Burma Are Losing Hope of Peace

With the internet, people can disseminate group messages or post on social media to alert others of danger. But these potentially life-saving measures are not currently available to my family and friends back home.

During the pandemic, online connectivity has also become ever-more important. When I call my family, I am always surprised by the widening gap in our awareness of the situation. I share updates I am able to easily access from Yangon, including information from the health ministry page and international news sites. But people in my village have to rely on word-of-mouth, and rumors spread quickly.

Not long ago, they asked me if alcohol and garlic could ward off the virus and whether the outbreak rapidly spreading across the state had been fabricated by the military to scare the public.

The pandemic also forced political campaigning for this year’s election to go online. The Nov. 8 nationwide poll was the first held since the historic 2015 elections transferred power to a civilian government after decades of military rule. While I could closely follow the candidates, those from my village hardly took notice. Even if they had been able to access the internet, they were among the more than 1.5 million people—mostly ethnic minorities—disenfranchised this year. Voting was cancelled in most of my state, including my village, due to the conflict.

Another consequence of the internet restrictions is that victims of human rights abuses are silenced. Unable to post on social media or send photos or videos, they cannot fully share with the world what is happening. It compounds the other steps authorities have taken to hinder reporting on the conflict, including limiting travel access for international media, arresting local journalists and blocking local media websites.

When I recently spoke to Nyi Htay, he told me life is getting harder in our village. While we once dreamed about going abroad, these hopes have all but disappeared for him as he focuses on his survival. Hearing gunfire every day, he fears going outside and doubts he will be able to harvest his rice crop, making food security an increasing concern. It’s harder for him to check the market value of rice or shop for seeds or farming supplies without the internet. Even if he is able to continue farming, the outlook for earning a sustainable livelihood is bleak.

Because the internet restrictions have placed onerous barriers on transferring money, local business and commerce are struggling.

For my generation, online connectivity has been critical to our educational and professional development. Because of the internet, I have been able to apply for scholarships, attend online classes and report on what is happening as a freelance journalist. It is painful to see my family and friends in Rakhine left in the dark.

“Internet restrictions have killed my dream,” Nyi Htay told me. “I don’t know how to move forward in my life.”

He isn’t alone. I hope the day will soon come when the Myanmar government reopens full internet services and condemns the military’s abuses against civilians in my home state. Until then, many people’s dreams and ambitions will fade.

—As told to Emily Fishbein 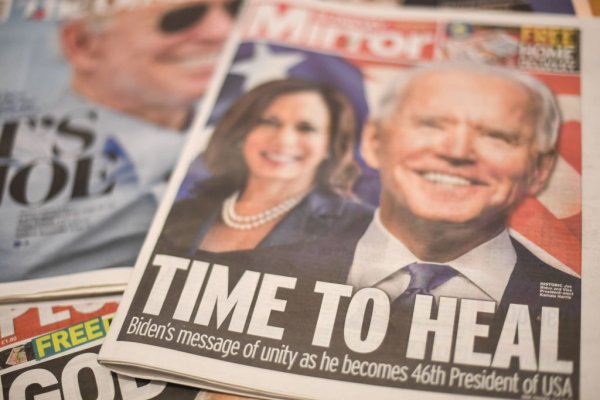 If Biden Is Going to Rebuild the International Order, He'll Need a Friend Like the U.K.
Next Up: Editor's Pick