Excitement and Anxiety as Burma Prepares for Historic Elections

The people of Burma go to the polls Sunday for what are shaping up to be the Southeast Asian nation’s freest elections in a quarter-century.

The ballot is considered a key test of an ongoing process of democratic reform and could herald the former pariah state’s first popularly-elected government since a military coup in 1962.

“I believe Mother Suu is the one to change the country, because she loves [Burmese] people,” says Rangoon resident Zao Zarr.

Suu Kyi and her National League for Democracy (NLD) have been campaigning feverishly on the promise of change. Their rallies are thronged by tens of thousands decked out in party’s iconic red flag with golden fighting peacock motif.

“We are the party that can change the situation in the country,” leading NLD member and former commander-in-chief of Burma’s armed forces Tin Oo tells TIME.

The NLD won Burma’s last unfettered election in 1990 only for the then-junta to annul the result, imprisoning Suu Kyi and anyone else who objected to its iron-fisted rule. It was only three years ago that the country, officially now known as Myanmar, begin reengaging with the world following the emergence of a quasi-civilian government headed by President Thein Sein, himself a former junta general.

But many have been disappointed by the pace at which this nation of 51 million has opened, a sentiment Suu Kyi hopes to yoke. At NLD headquarters in Rangoon, Burma’s biggest city and former capital, a steady stream of well-wishers buy mementos — key rings, car stickers, hats and t-shirts adorned with Suu Kyi’s face and the party slogan, “We must win.”

“The changes haven’t been very obvious and I’d like improvements in the education system, for the working class and I want to see poverty diminished in Myanmar,” says NLD supporter Zao Zarr as her two young nieces scour for souvenirs, golden thanaka paste, a traditional beauty product and sunscreen, swirled on their cheeks.

Zao Zarr’s disappointment is felt by many. Burma has seen crackdowns on protesters rallying for education reform or land rights, while activists and journalists continue to be suppressed. And so while the ruling Union Solidarity and Development Party (USDP), backed by the powerful military and stocked with former junta generals, is credited with kicking off the reform process, “the majority of people do not think the USDP is a reformist party,” says Rangoon-based political commentator Yan Myo Thein.

Watching in the wings are international election observers, including a team from the U.S. Washington has spearheaded the rolling back of economic sanctions and President Barack Obama has visited the country twice, meeting with both Suu Kyi and Thein Sein. Following the government’s initial moves towards reform, USAID reestablished its mission and the U.S. poured in $18 million in elections assistance to “improve the administration and transparency of the electoral process.”

“So far I think the process is proceeding peacefully,” says Masaharu Nakagawa, former Japanese Minister of Education and president of the Japan Parliamentary Group Supporting Democratization in Myanmar. “This is a very important moment and whether the NLD is going to win or not I think a stable transition of power should be realized by this election.”

However, even if the NLD romps home at the polls Suu Kyi is constitutionally barred from taking the top job, owing to her marrying a foreigner and having two sons who are foreign citizens, provisions specifically drafted to scupper her political ambitions. Yet this hasn’t stopped the former political prisoner from declaring that she would still lead the nation should her party win.

“I will run the government and we will have a president who will work in accordance with the policies of the NLD,” she said at a press conference in Rangoon on Thursday.

NLD supporter Kayar Nue Myint, 44, from Burma’s delta region, says she is worried for the potential of violence on election day.

“I am going to vote for NLD for sure but I am actually scared,” she says, her red t-shirt emblazoned with the phrase “We love Mother Suu” in gold lettering. “I say this not because of myself because I am old, but I am saying this for the new generation, they need a new change.”

While the election process is touted as the freest in decades, analysts say the country’s political system is set up to ensure the military stays in power. The armed forces are constitutionally guaranteed a quarter of parliamentary seats while three-quarters of the legislature is required to enact any change to that document, providing the green uniforms an effective veto over the country.

“The elections are fundamentally flawed because the constitution hasn’t changed,” says David Mathieson, senior researcher on Burma for Human Rights Watch. “The elections won’t change the fundamental strangle hold military have on the political system.”

And the heady election buzz around Rangoon hasn’t translated to Burma’s rural periphery, where conflicts between government troops and ethnic rebel armies rage unabated, despite a supposed nationwide ceasefire being signed on Oct. 15. Only eight out of 15 groups invited to the peace talks signed the pact, and around 4 million voters have been disenfranchised ostensibly due to the fighting.

“People have to realize there are more active conflicts in the country now than five years ago,” says Mathieson. “And many more unresolved issues with the government.”

Those barred from voting include the persecuted Rohingya Muslim minority, who are denied citizenship and considered illegal immigrants despite many having living in the country for generations. The plight of these people, over 100,000 of whom fester in squalid internment camps in the nation’s far west, and who according to a reports by the International State Crime Initiative are facing a state-sponsored genocide, is steadfastly ignored by mainstream the parties, including the self-styled human-rights defender Suu Kyi.

“All political parties have made it clear that they have no intention of promoting the interests of the Rohingya,” says Mathieson. 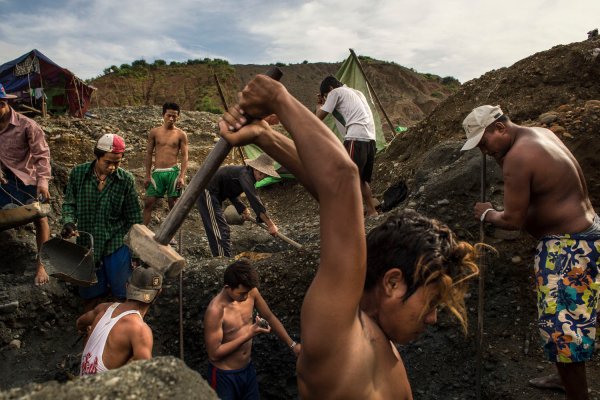 See the True Cost of Burmese Jade
Next Up: Editor's Pick