Inside the Kachin War Against Burma

High school and university students receive drill instructions in Laiza, which lies in a Kachin Independence Army–controlled part of Kachin state, in Burma, on Nov. 10, 2014.
Adam Dean—Panos for TIME
By Hannah Beech

Morning mist hangs low on the jungle as Kachin cadets stand to sleepy attention on this November morning, clutching slabs of wood whittled into the contours of rifles. Not far away in the mountains of northern Burma, soldiers in the Kachin Independence Army (KIA) face off against Burmese positions, a state of intermittent war that has prevailed since a 17-year cease-fire between the ethnic militia and the Burmese army collapsed in 2011.

The 162 cadets training at the military academy in rebel-held Laiza are hardly a fighting force — they are high school and college kids undergoing their first guerrilla training. Still, the KIA, which controls chunks of land near the Burmese border with China, needs all the recruits it can get.

“The Burmese want to steal all our land, but they will never succeed,” says Hkawng Lum, a student from Myitkyina, the Kachin state capital that is under Burmese army control. The 19-year-old has been training at the military academy for one month and will eventually return behind enemy lines to serve in the KIA reserve. “Every Kachin,” he says, “will fight to the death.”

On Nov. 19, a heavy artillery attack by the Burmese army overwhelmed another KIA training camp in Laiza, killing 23 officers in training — a body blow to ethnic rebels who have been forced to manufacture their own knockoff rifles and land mines. The assault, which killed cadets from several ethnic groups, came as the KIA and the Burmese army had been holding fitful peace talks, even as skirmishes had proliferated across the state.

“We knew that the Burmese army was full of tricks,” says a Kachin Independence Organization information officer. “The peace process is dead.”

The United Nationalities Federal Council, which represents a diversity of Burma’s many ethnic groups, said that the shelling had “caused a tremendous obstacle in building trust.” The Nov. 19 attack came just days after Burma had hosted an international summit attended by national leaders, including U.S. President Barack Obama. On his second visit to the country in two years, Obama warned that Burma’s much lauded reforms were by “no means complete or irreversible.”

Since Burma’s military junta began a transition to a quasi-civilian government three years ago, its rulers have promised an imminent national cease-fire with various ethnic armed groups that have been battling the Burmese military practically since the nation gained independence from the British in 1948. National reconciliation is seen as key in helping the nation’s economy develop but the ethnic militias are wary of giving up autonomy to the centralized Burmese state. Some truces have been struck, although not with the 10,000-strong KIA. Even in areas technically under armistice, continuing clashes undercut talk of peace. It escapes no one’s notice that some of the worst fighting is occurring in regions that boast some of Burma’s most-plentiful natural resources.

“When the Burmese army talks about a cease-fire, they mean stopping shooting for a short while,” says Manam Tu Shan, a 67-year-old Kachin church deacon in Laiza. “But what we mean by a cease-fire is living peacefully and being able to practice our traditions without the Burmese interfering.”

Although Burma is dominated by the Bamar, or Burman, ethnic group, some 40% of the country’s population is composed of dozens of ethnic minorities — the Kachin, the Karen, the Shan, the Wa, the Chin, the Mon and the Rakhine, among many others. When the country, now known officially as Myanmar, gained independence, it did so as a federal union in which several ethnic groups were given the option to secede if they were unhappy with their new state.

But an army coup in 1962 ushered in nearly half a century of brutal military rule. Most generals were Bamar chauvinists who won their stripes by battling various ethnic militias in the eastern and northern fringes of the country. Some of that strife, which displaced millions of ethnic villagers and subjected them to institutionalized rape and forced labor by Burmese soldiers, has been described as the longest-running civil war on earth. The current Burmese government has also been criticized for its treatment of more than a million Muslim Rohingya, a largely stateless group that lives in western Burma. Hundreds of Rohingya have been killed in pogroms over the past couple years and 140,000 have been sequestered in ghetto-like camps.

Bleakness and Bounty
The KIA headquarters in Laiza feels like a Wild West town, but with none of the romance of that description. Until the turn of this century, Laiza was little more than a dusty border outpost with China. But as the Burmese army pressed in, the KIA stronghold took on outsize importance. Laiza is now a collection of cement-block buildings with stores selling Chinese plastic goods, pirated DVDs and the latest in army-camouflage fashion. Heroin and methamphetamines are a scourge, as is human trafficking across the border with China.

If the town is bleak, the hills surrounding Laiza, and spreading across Kachin, are some of the most bountiful on earth. There is jade, gold, timber and hydropower. Banana plantations dot the landscape, as does the odd golf course, a relic of colonial sportsmanship enjoyed by the KIA top brass. There are also more than 100,000 Kachin who have fled the fighting to live in remote refugee camps. To survive, some villagers pan for gold for Chinese-owned companies, their pay meager even by the standards of one of Asia’s poorest nations.

While the Bamar are Buddhist, the Kachin, like several major ethnic groups in Burma, practice Christianity. There are no pagodas in Laiza, just as there are no churches in Naypyidaw, the bunkered Burmese capital that the generals unveiled in 2005. Although the Kachin are proud of their martial prowess — Kachin soldiers fought alongside the Allies in northern Burma during World War II and were known to string the teeth of their enemies around their necks — they have been excluded from the Burmese Defense Services Academy (DSA), which trains the nation’s next generation of military elite. (Before the army takeover in 1962, one headmaster of the DSA was Kachin.) These days, the highest-ranking Kachin in the Burmese army is a mere captain.

Laiza itself is deeply militarized, with some men carrying geriatric rifles that look like they did their best work during World War II. Most of the bullets are Chinese imports, and they are precious. At the Laiza military academy, Major Kyaw Htwi admits that live-ammunition training is too expensive for common practice. Some of the machine guns on hand are held together with duct tape. But the major has taught Kachin cadets for 21 years and is confident of his charges’ ability to adapt to jungle warfare.

“The Burmese want the ethnics to become extinct,” he says, as a soldier pulls a Kachin flag up a flagpole and salutes the dusty pennant. “But we will never give up our struggle.”

Days later came the Burmese army attack. There is no peace now in the hills of Kachin. 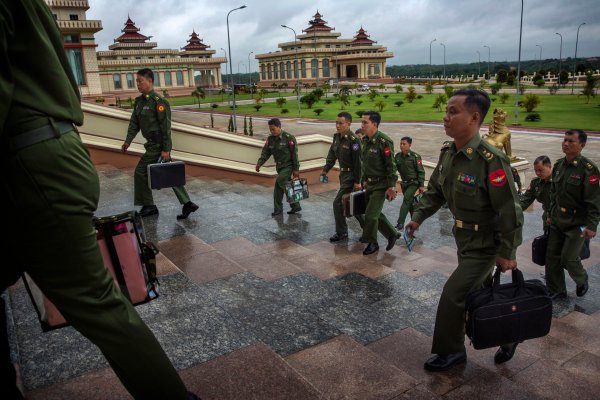