I Gave Donald Trump a Chance After He Was Elected. The President's Supporters Should Do the Same for Joe Biden Now

Ideas
By Katie Couric
Couric is an award-winning journalist, co-founder of Stand Up To Cancer and in 2016 founded her own media company, Katie Couric Media. Sign up for her daily newsletter here.

On Sunday, I woke up feeling like my old self. (Just 40, I mean 4 years older.) I got to know Donald Trump during my 15 years on the Today Show. Part of our job was to promote a reality show I had never seen called The Apprentice. His success was partially our responsibility.

“The Donald” as he was known to Manhattanites, was very nice to me during those years. He supported my colon cancer efforts after my husband died. I attended his wedding in 2005. And although I believed that Hillary Clinton would have been a far better president, I did as she encouraged me to do in her moving concession speech; I tried to keep an open mind. I prayed that somehow the awesome and humbling job of leading our country would bring out the best in him, that he would rise to the occasion. Instead, I watched, as so many did, as it seemed to bring out the worst in him and he sank lower and lower. We were like the proverbial frog in the water. It got hotter and hotter over the course of his presidency and we became slowly accustomed to the norm-breaking outrages, until it reached a roiling boil.

I recognize that some people appreciated that “he said it like it was” and that he became a vessel for their fears and frustrations. But every day he seemed to take his bare hands and rip apart the gaping wound that already existed in our country, preventing any chance of eventual healing. The “birther,” who inexplicably promoted the false notion that Barack Obama was not a U.S. citizen, gave birth to countless conspiracy theories and the nefarious groups that trade in them. And he sowed mistrust in our institutions, a reality star who locked his supporters into an alternate reality and threw away the key. Donald Trump didn’t grow bigger in the job. He grew smaller.

Now, it really is “morning in America.” We have a President and Vice President who will comport themselves with dignity, humility and decency. We saw that on Saturday night. They have a huge task, of course: Making millions of Americans who didn’t support them feel seen, heard and cared about. They must help them understand that the changing demographics of our country aren’t something to fear, but to celebrate. And job number one is to lead the country out of an out-of-control pandemic that is leaving families grieving over the lives and livelihoods lost.

I’m an optimist, but I’m not cock-eyed. As my friend, historian Jon Meacham says, disagreement is the oxygen of democracy. I’m just looking forward to, as Joe Biden said, lowering the temperature of our national thermostat and seeing each other as human beings, not bumper stickers or lawn signs. Perhaps then we can get back to work and start making progress on some enormous problems that won’t just go away on their own. I wanted Donald Trump to succeed and I gave him a chance. For all those who voted for him, please do the same for the incoming Administration. I’m excited to do my part. Are you? 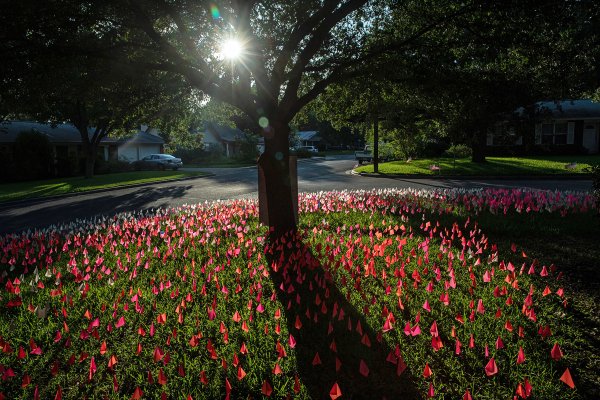 Biden Must Help Us Understand Our Collective Loss
Next Up: Editor's Pick