A Leader Should Appeal to Their People’s Best Instincts. Donald Trump Appeals to the Worst

George Washington understood the stakes. “As the first of everything,” Washington wrote, whatever he did, substantially as well as stylistically, would “serve to establish a precedent.”

In 1790, the first full year of Washington’s presidency, John Adams captured the cultural as well as the political significance of the office, writing: “His person, countenance, character, and actions, are made the daily contemplation and conversation of the whole people.” Adams’ great rival Thomas Jefferson agreed. “In a government like ours,” Jefferson wrote, “it is the duty of the Chief-magistrate, in order to enable himself to do all the good which his station requires, to endeavor, by all honorable means, to unite in himself the confidence of the whole people.”

On the eve of the two-year anniversary of the election of the 45th President, it’s clear that Donald Trump has no compelling interest in leading what the founders thought of as “the whole people.” Washington created the framework for the office, and most (though not all) of his successors understood, as Harry Truman put it, that “you can’t divide the country up into sections … and you can’t encourage people’s prejudices. You have to appeal to people’s best instincts, not their worst ones.” Today, words like Truman’s seem to come from the remotest of eras.

In the wake of the attempted mail bombings of a wide range of those whom Trump has frequently targeted, including former Presidents, the fatal shooting of two African Americans in a grocery store in Kentucky and the massacre at the Tree of Life synagogue, many Americans are asking a tragically now familiar question: What can we do in an era of rising white supremacy when we have a President who not only refuses to curb his sulfurous rhetoric but who threatens, as he recently did, to “tone it up”?

We now know as surely as anything is knowable in human affairs that Trump is determined to be a force for division, not for unity. He has no apparent interest in rising to the historical moment. To him, the presidency seems to be a reality show–a lark in which narcissism and nationalism are inextricably intertwined. “The President,” Woodrow Wilson once observed, “is at liberty, both in law and conscience, to be as big a man as he can.”

Or, as we are seeing now, as small. So the national task is this: How can the country find a reasonable equilibrium of temperament that will check and balance the climate of division on which Trump thrives? Given the centrality of the presidency in much of our history, it’s a difficult question but an essential one, and much turns on whether we can find a compelling answer. My own view is that we must attempt, insofar as possible, to focus our civic energy not on the President’s heart and mind–those seem a lost cause–but on our own. The nature of a republic is shaped by the mysterious and complicated interplay between the leaders and the led, and experience and philosophy teach us that popular governments often mirror as much as they mold who we are.

An uncomfortable thought for many of us, but candor compels us to confront it. Though Trump is a novel President, he represents–indeed embodies–ancient and perennial forces of political, racial and cultural fear. Yes, America is the nation that produced Harriet Tubman and Martin Luther King Jr. It’s also the nation that pursued and perpetuated enslavement and institutionalized racism to such a prolonged degree that it took a Tubman and a King to bring about a measure of justice. And justice takes a long time to come–and when it comes, it’s difficult to hold on to. Still, as Frederick Douglass said, “I know of no soil better adapted to the growth of reform than American soil.”

That a republic is the sum of its parts is an insight with deep roots. “Machiavelli, discoursing on these matters,” the 17th century English theorist and politician Algernon Sidney wrote, “finds virtue to be so essentially necessary to the establishment and preservation of liberty, that he thinks it impossible for a corrupted people to set up a good government, or for a tyranny to be introduced, if they be virtuous.” Three hundred years and an American republic later, Truman was blunter. “The country has to awaken every now and then to the fact that the people are responsible for the government they get,” the 33rd President observed. “And when they elect a man to the presidency who doesn’t take care of the job, they’ve got nobody to blame but themselves.”

The best historical analogy to our current moment offers little reassurance. In the presidency of Andrew Johnson the nation faced a crisis over whether it would heed the implications of the Union victory in the Civil War. After Lincoln’s assassination, Johnson fought a prolonged rearguard action against equality, vetoing key Reconstruction legislation and opposing the 14th Amendment.

“White men alone must manage the South,” Johnson said, and he issued what the historian Eric Foner has called “probably the most blatantly racist pronouncement ever to appear in an official state paper of an American President,” asserting that blacks were incapable of self-government. “No independent government of any form has ever been successful in their hands,” Johnson wrote in his 1867 annual message. “On the contrary, wherever they have been left to their own devices they have shown a constant tendency to relapse into barbarism.” He attacked Congress relentlessly, sowed fears of conspiracy and cast himself as a victim of evil forces.

Johnson’s Trump-like defiance of norms did not create racism, of course, but it did affirm it. And the capitulation of the governing class in 1877–giving Republican Rutherford B. Hayes the presidency in exchange for the withdrawal of federal troops from the South Carolina and Louisiana statehouses–meant Jim Crow would endure for nearly a century.

So is Trump the harbinger of a new dark age? Not if We the People engage fully and consistently in the arena. The demographic and cultural trends that will continue to produce a more diverse America are irreversible. Andrew Johnson governed a vastly majority-white nation; Trump is more likely the end of something, not the beginning.

But only if the people force the issue and endure. Cold comfort? Perhaps, but it’s just about all we have–and just about what we’ve always had. “One thing I believe profoundly: We make our own history,” Eleanor Roosevelt wrote shortly before her 1962 death. “The course of history is directed by the choices we make and our choices grow out of the ideas, the beliefs, the values, the dreams of the people. It is not so much the powerful leaders that determine our destiny as the much more powerful influence of the combined voice of the people themselves.”

After his own single term as President, John Adams wrote that “the people … ought to consider the President’s office as the indispensable guardian of their rights,” adding: “The people cannot be too careful in the choice of their Presidents.” History and experience suggest that, in moments where care fails, we must undertake the duties of guardianship ourselves. We are living in just such a moment.

Meacham is the author of The Soul of America: The Battle for Our Better Angels 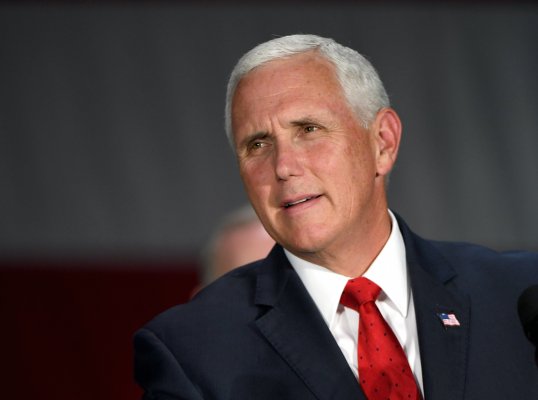 Pence Says Trump Has No Responsibility For Mail Bomb Attacks
Next Up: Editor's Pick