Why Men Need to Stop Relying on Non-Verbal Consent, According to a Neuroscientist

Getty Images
Ideas
By Lisa Feldman Barrett
Feldman Barrett, Ph.D. is a psychologist and neuroscientist and the author of How Emotions are Made: The Secret Life of the Brain.

As a woman, I’m immediately skeptical that men can’t tell the difference between consensual and nonconsensual activity. It seems like an easy out.

Reading through the awful details of the #MeToo cases, some claims of consent seem clear-cut, like the Bill Cosby case, which involved drugging a woman before sex. Others are more complex, as with Missouri Governor Eric Greitens, where an encounter might have begun consensually but allegedly veered into coercion and assault. Eric Schneiderman, who resigned as attorney general of New York after being accused of slapping and strangling several women, claimed the sexual encounters were consensual. His accusers, obviously, did not agree.

As a neuroscientist, however, I’m forced to consider another alternative, however distasteful. The human brain is wired so that people see what they believe. In many cases, without verbal consent, two peoples brains can perceive exactly the same events very differently. They can, in effect, be experiencing different situations.

Your brain is a predictive organ. In every waking moment, it does its best to guess what will happen next, a process scientists call active inference. It guesses how much water and salt your body needs to stay alive and healthy. It guesses whether a rustling in the grass is a wild animal or just the wind. And it guesses the meanings of moving faces and bodies around you.

Because your brain is always guessing, facial movements are terrible indicators of consent, rejection and emotion in general. A smile can mean “I’m happy” or “I consent,” but it can also mean “I’m embarrassed” or “I’m plotting your downfall” or “You’re much stronger than I am, so I’d better play along.” The same is true for body movements. Even shaking your head from side to side, which you might think obviously means “no,” can have other meanings, like “I’m confused” or “I can’t believe you just made that joke” or “I’m feeling dizzy.”

Every experience you have, and every action you take, begins with your brain’s pre-conceived beliefs about what is true. Any time you make meaning from another person’s smile, or the tilt of their head, or their parted lips, it’s because your brain has guessed a meaning based on what you feel to be true.

Men aren’t any different from women in this, or at least there isn’t any scientific evidence of biological differences in active inference. Everyone has moments when what they want influences what they see or hear. It’s human nature. If men trip over the boundary of consent more often than women, perhaps it’s because they are more likely to ask for sex in the first place. But it’s certainly no excuse.

The effects of active inference can be profound. People often literally see things that aren’t present. Your brain guesses wrong, and you see a smile when a person’s face is neutral. Ideally, your brain automatically takes in the new information and corrects itself, but sometimes it doesn’t and you see a smile anyway. In a famous experiment called the “invisible gorilla,” created by cognitive psychologists Dan Simons and Christopher Chabris, volunteers were asked to watch a video of people tossing a basketball and count the tosses. While engaged in this task, the viewers missed seeing a gorilla walk obviously across the basketball court. The viewers saw what they believed was happening, instead of what was right in front of them.

Research from my lab shows that your mood can also influence what you see; when you feel good, other people look more attractive, trustworthy, and appealing to you. In sexual situations, without verbal communication, consent may be a casualty of viewing the world through desire-colored glasses.

Outside the range of felonies, it’s easy for two reasonable people to miscommunicate about consent when they rely on face and body language instead of actual words. I know this from my experiments, but also from personal experience: Twenty-five years ago, a date and I were deep-kissing on my couch. I liked him, though we’d met only recently. So when he reached for my breast and I gently deflected his hand, I thought he was being playful. And when he shifted his hips and maneuvered me downward, I thought he wanted an intense make-out session. It didn’t become clear to me until it was almost too late that he was expecting sex — and he believed I was, too.

My brain and my date’s brain were taking guesses about what the other person wanted, and guessing wrong. Without exchanging words, the result was my own uncomfortable and distressing #MeToo moment.

Miscommunication about consent happens, but it is never an excuse for assault. These famous men insisting the accusations against them were consensual acts may be lying, or they may be suffering from an error of active inference. Either way, the lesson is clear: Face and body movements aren’t a language. They are not a replacement for words. Even words aren’t guaranteed to be heard, but they’re less likely to be misunderstood. We must live within our biological limits and realize that certainty is only a feeling. 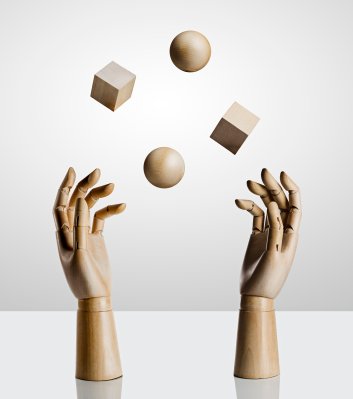 Here’s a Better Way to Deal With Life’s Risks
Next Up: Editor's Pick