Lucy Hale Gets "Raw and Real" on Debut Album Road Between: Q&A

Lucy Hale may be best known as Aria Montgomery on ABC Family’s sudsy primetime soap Pretty Little Liars, but the actress has always been a musician at heart: Hale grew up in Tennessee as a country music enthusiast, and has had her sights set on releasing an album of her own ever since.

Now, that dream comes to fruition: Hale’s debut album Road Between, a collection of twanging, hooky country tunes she recorded while on breaks from shooting her TV show, finally drops June 3 on Hollywood Records. Meanwhile, Hale is filming the fifth season of Pretty Little Liars, which premieres on June 10, while prepping to tour in promotion of her new music later this year. The busy actress squeezed in some time for TIME to discuss how Road Between came together, and what lies in store for Aria this season.

TIME: Did you have a moment where you felt compelled to finally make your first album?

Lucy Hale: Yeah. I’ve done music for as long as I can remember. I actually moved out to LA initially for music, not for acting. Because of the success of my shows, the music got put on the back-burner. I got signed and there was a moment where I was like, “I’m ready. This needs to happen.” I just felt comfortable with who I was, and I had a stronger sense of self and what I wanted my sound to be and what I wanted to say. I’m grateful that it happened when I was more of an adult rather than when I was younger.

So when did you first start working on the record?

A little over two years ago. That’s an extremely long time to make an album, but I used it to my advantage because we had the luxury of not having a deadline. There wasn’t much stress around it. It was a really fun, enjoyable experience. But we took our sweet time!

Did you have a certain vision for the album when you started?

I knew what genre I wanted. I’ve never doubted country music — I’ve always wanted to do that. But when you’re making a first album, you have the ability to do whatever you want. You only get one first album, and you have to set the stage and tone for the rest of your musical career. No pressure or anything! I just wanted it to be a really clear picture of me. That’s why I’m glad we got to take our time, because I got to draw from so many different experiences and work with a lot of really good people. Once we nailed the tone of the album, it just happened organically and the pieces fell into place.

What is it about country music that attracts you?

Out of any genre of music, the songs tell beautiful stories. I’ve always loved the details of the lyrics. I’ve always connected to what these songs are saying, even as a little girl. When you’re young, you loved reading stories and watching movies, and it was that way with country music. So the same reason I loved it as a kid are the same reasons I love it as an adult. And I find that country music is very relatable, and I think that’s all an artist can really hope for — that their songs can speak to someone.

Which country artists did you like most growing up?

I loved me some Shania Twain. I liked Dixie Chicks a lot. Martina McBride was probably my favorite singer. She’s still one of my favorite vocalists. But I loved Britney Spears and Spice Girls, too.

Were there certain stories you wanted your album to tell?

I’ll be 25 in a couple weeks, but we started the process when I was 23. I had to grow up kind of fast, living out in LA. I felt like I had gone through some stuff that was worth singing about – the experience of being in love, heartbreak. I felt like there was a lot to draw from.

What did you learn about yourself during the process of making the album?

Through the whole process in general – songwriting, recording and even now performing live – I realized I have a lot more self-confidence than I thought I had. I rarely say that I’m proud of myself about something. It’s not like, “Oh, I made this great album, look at this.” It’s that I’m proud of myself for really opening up and allowing myself to be raw and real. Usually, with what I do — being an actress on a TV show in LA — you don’t always get to be yourself. You don’t always get to talk about real life stuff. This music really opened me up and let me be myself more.

Is there a specific song on the album that really showcases that?

Yeah, there’s a song called “Nervous Girl.” The first time I heard it I immediately knew it had to be my song. I didn’t write this one, but I immediately connected with it, and I knew that I had to be the person who sang this song. The lyrics are very important. The message of the song is something I think people need to hear. That’s a song that never sounds the same twice. I feel like I discover something new about it each time I sing it. That’s rare, for an artist to have a song like that.

No, I feel like they’re really different. The music is me. It’s my stories. I’m not hiding behind anything. With acting, obviously, that’s not Lucy, that’s a character. But because of the success of [Pretty Little Liars] and that area of my career, it’s helped me to have a stronger work ethic. And I have a thicker skin. It’s allowed me to accept criticism. Making an album is really hard. To put yourself out in that way. You’re going to get a lot of feedback, not always good, and it’s helped me develop that thicker skin.

You’re probably sworn to secrecy on a lot of things, but what can you say about the upcoming premiere of Pretty Little Liars?

You’re right – I am sworn to secrecy! But the premiere picks up right where we left off. And we left off where Ezra’s been shot. So you find out the fate of Aria and Ezra, and whether he’s alive or not alive, and what happens. What’s different about this season from the other ones is that Alison is really back this time. Our show, up to now, has been the search for Alison. Now that she’s back, the whole dynamic is different. She’s coming to school, she’s back in the group. Things are changing.

Are you rooting for Aria and Ezra’s relationship yourself?

I really am. That’s the whole reason I wanted to do the show in the first place. I remember I read the script, and it was the heart and soul of the show for me. They have such an interesting love story and it has this Romeo and Juliet feel throughout the whole series. These are two people who are not supposed to be together, but yet they are, and they can’t help it and they love each other. You can really tell that they believe they’re soulmates. So the romantic in me wants to see it work out.

Beyond the love stories, Pretty Little Liars really showcases strong female friendships. Why is that important for a TV show?

How much longer do you see Pretty Little Liars continuing?

I think we have a few more seasons in us. I’d love to see this show end in a good spot, where people really really care about it. I think it’s a show that can’t go on forever. The girls and I are getting older. I don’t want it’s going to end soon, but we’ve been doing this for five seasons. We’re going to do a sixth season, I think, and after that we’ll know how it’s going to end. That will be one epic ending! 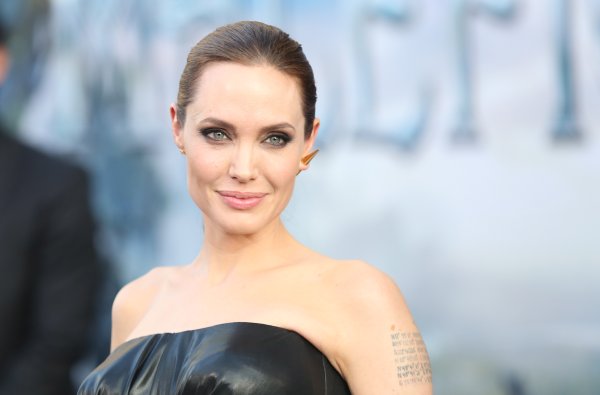 Mighty Maleficent: Why Angelina Jolie Is the World’s Highest-Paid Actress
Next Up: Editor's Pick