Shay Mitchell arrives at the premiere of "Mother's Day" at the TCL Chinese Theatre in Los Angeles on Apr. 13, 2016.
Richard Shotwell—Invision/AP
By Ilana Kaplan

For six seasons, the actress Shay Mitchell has been best known to viewers as Emily on Pretty Little Liars, bringing to life one of TV’s most visible young LGBT characters. But she’s also branched out into film with roles in the recent film Mother’s Day, released her debut novel Bliss, and shown her stripes as an entrepreneur and activist with charity work for the Somaly Mam foundation, lifestyle blog, and popular social media presence that’s all about positivity and sartorial inspiration.

With the upcoming season of Pretty Little Liars kicking off June 21 (and a feature in Nick Jonas’ latest video), TIME caught up with Mitchell about what to expect from the show this season, and what’s next for the actress herself.

TIME: After playing Emily on Pretty Little Liars for several seasons, have people confided in you about how your character’s relationship with her sexuality helped them in coming out?

That’s the best part—when fans come up and I get to have a conversation with them. I didn’t realize how big of an impact the kind of character I was playing was going to have. I was brought up in a very liberal family. They always said it doesn’t matter who you date as long as they make you happy. I didn’t truly know how many people weren’t raised like that. By playing Emily and having people share their stories with me, it was really incredible.

What’s the Shay Mitchell brand all about?

I’d say I want people to feel like they can try and do whatever it is they’re passionate about and want to do. At the end of the day, you have to look back and realize you have one life, so why not make the most of it? You don’t really have anything to lose. I’m not an author or writer by any means, but I wrote a book. I had a story to share, I wanted to do it, so I did it. The goal isn’t to have it be the best book in the entire world, but it’s just to do it because I’m passionate about it and enjoyed that process.

Why do you think you’ve become such an inspirational figure to young women?

I never honestly think about it like that. As nice as it is to hear when you have a small impact on people, you never go about it trying to do that. For me, it all started with [Pretty Little Liars] and the character I play and being that character that could open up that discussion for people that were watching it with their families and making it a little bit easier. I always say it’s one thing to entertain people, but to have a small impact on their life in a meaningful way is even more important to me.

When you look at people’s social media platforms—even mine—I’ll be honest and say you’re looking at my highlight reel. My Instagram is not my complete diary. You don’t see when I don’t get out of bed. I want my Instagram to be a place where you can find a brand you like, find a quote you like or a place you want to set your destination to. If people want to talk about my life as a whole, then that can be a separate conversation, but for me, I want my Instagram to reflect the positive side of me. I think as long as you remember that when you’re looking at whoever’s [social media] page, you’re looking at the happiest of times. I really do choose it to be a destination for some sort of inspiration or positivity. As long as you can remember it’s the highlight of someone’s life—that’s important.

Pretty Little Liars premieres this month. Will we see Emily taking care of Alison once again this season?

I think that their relationship is unlike any of the other relationships that the other girls have. It was something very special—it was Emily’s first love. It’s when she really was able to figure herself out. I think whatever Ali goes through, I truly believe that Emily will always be by her side.That’s the friend you’d want to have. I think even in my own [personal] friendships, you may not have talked in a long time, but you pick up exactly where you left off. If you made each other mad, you were sisters and still bonded in some way. I think that’s kind of the relationship that Emily and Ali have.

Emily was in debt and struggling last season. Will we see her get her life together more this season?

I think so, yes. All of the girls kind of do. They go through a lot of things this season. At the end of the day, they’re still trekking along and moving forward. I think that’s important to show. It’s kind of an amazing quality about each of the girls that no one has given up: they’re still continuing to push through. Obviously, their world is the extreme situation, but it shows that we all go through a lot of things in our own life. Some days it is hard to get up and keep moving forward, but they do.

Will Emily re-kindle an old flame or find a new love this season?

I think that she’ll come into an important relationship this season. Do you like how I have to word it? This season there are a lot of people coming back from the past and I think it’ll make for interesting relationship twists of all kinds. It’s like the reunion year.

Yes. I think that the questions everyone has had from the past seasons will be answered.

Is Lucas’ creepiness going to catch up with him?

I definitely feel you on that one. Emily and Hannah spent some time in his loft this past season. I don’t know what we’ll see from him.

Season 6 got a lot darker and more dangerous. What is this season of Pretty Little Liars going to feel like in comparison to the last?

This season, more so than the others, is the beginning of the end. It’s tying up all of the other seasons, questions and storylines in a neat bow.

So, is season 7 the end of the show officially?

It’s not official—I don’t think anything is ever official, especially in Rosewood.

In a dream world, what would Emily’s future look like?

I think that she really enjoyed being in California. I think she’d move back to California, get an apartment on Venice Beach, hang out there and just live a really chill life. She’d find someone she cares about and start her family there. She wouldn’t have a lot of technology things following her along. She probably wouldn’t be on social media, so she’d be the opposite of me.

You just starred in your first big feature film role. What does your career look like past Pretty Little Liars?

If a great movie or TV show comes about, then that’s what interests me. I’d love to play someone different. I think what interests me is what kind of experience I’m going to get out of this next phase. Now that it’s almost seven years past when we started the show, I’m at a great place, and I’m really happy. If I could continue it, it would be to continue on this ride and seeing what gets put in front of me. I think as long as you’re happy, that’s the end goal. 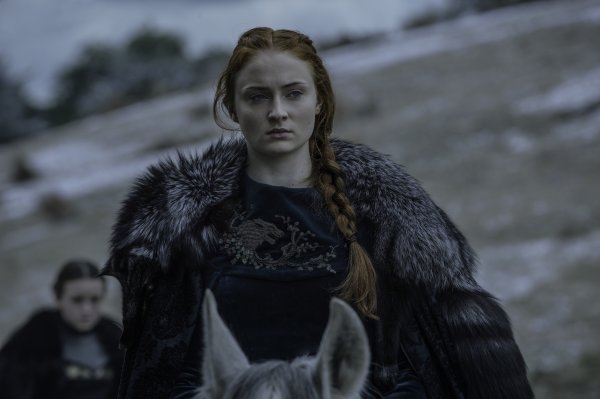 Women Are Winning on Game of Thrones. But It Feels a Little Forced
Next Up: Editor's Pick