President Donald Trump’s last rally before the 2020 election in Grand Rapids, Mich., on Nov. 3, 2020.
Peter van Agtmael—Magnum Photos for TIME
Ideas
By Brittney Cooper
Brittney Cooper is a professor at Rutgers University and the author of Eloquent Rage: A Black Feminist Discovers Her Superpower.

Since the 2000 election, the first in which I was old enough to vote, the Republican Party and the courts have worked together to disenfranchise voters on the left, who are disproportionately people of color. It is because of two sets of practices—voter suppression and the Electoral College—both rooted in American racism, that the 2020 presidential election is a nail-biter. It should not be.

The Trump presidency has been a failure. He was impeached for inviting foreign interference into U.S. elections. He has separated breastfeeding babies from their mothers and locked kids in cages at our border. He has encouraged white supremacists, failed to pay his taxes and mismanaged a pandemic costing more than a quarter million American lives. There is no set of standards—professional or moral—by which he could be deemed a success.

But he may still be reelected.

Like many Americans who love “liberty and justice for all,” I hope that Joe Biden and Kamala Harris will prevail. But if they don’t, it’s certainly not Black people’s fault. Let’s be clear: Donald Trump is the fault of white people. His rise is a direct result of white people’s collective rejection of the progress that the Obama era signaled. And it is time to point fingers. It is time for the Americans who elected him the first time, handing him the power of incumbency this time, to take responsibility.

At some point we must reckon as a country with the moral perversion of asking the people with the knee of the state on their necks to subdue their attackers. Yes, that is the African-American story—that we fled plantations and led slave revolts to demand our freedom. But that is not a reasonable expectation of citizens in a functioning democracy. The institution of slavery did not die until white Americans were willing to risk something to insist on a better way for the country.

We must stop holding as a broad cultural expectation the idea that African Americans need to overperform in the voting booth to stave off fascism. Black people, especially Black women, consistently show up in large numbers to insist that America does not have to go the way of white supremacists and fascists. Based on the early numbers in this election, Black people could break records in places like Georgia and Texas. It is the energy that young Black voters are bringing back to the South—helped along by the vision of Stacey Abrams—that might actually change the political landscape of the country.

And it is white voters, and increasing numbers of men across racial demographics, who show up to kill the hope of an expanded democracy. If Trump wins, white Democrats might have to accept what so many of us who are not white already know—the future of the country is young, Black and brown. Those are the people who represent where progressive politics is headed, and it is their votes that should be courted.

As Abrams’ own trajectory proves, Black turnout alone cannot best state-sanctioned voter suppression. Liberal politicians and commentators need to remember this, too, as they try to explain what happened in this election. If Biden and Harris prevail, it will be because Black voters overwhelmed the system. But white people–all white people–must stop holding this as the expectation and the standard. White voters overperform in their support for white supremacist candidates and white folks must grapple with the reasons as we determine what the story of 21st century American politics will be. 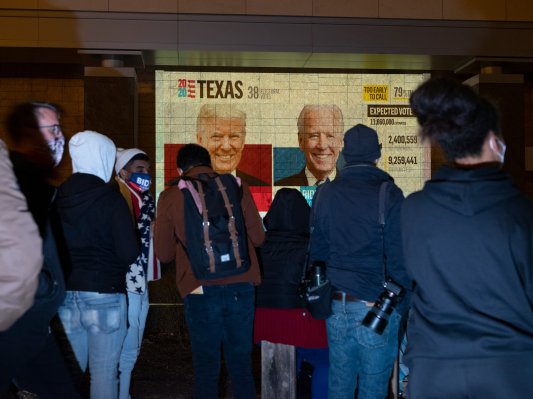 On Election Day, Polarization Prevailed
Next Up: Editor's Pick