Migrant Children Were Asked to Draw Their Experiences in U.S. Custody. Here's What They Drew

The American Academy of Pediatrics (AAP) released drawings by migrant children Wednesday that depict the children’s interpretation of conditions inside Border Patrol detention facilities. In one drawing sent to TIME, five people lie in a cage covered by blankets while guards man the exits. In another, five stick figures stand inside a cage, while guards watch from the other side.

The children were asked to draw their experiences with Customs and Border Protection (CBP). At the time, the children were visiting the Catholic Charities Humanitarian Respite Center in McAllen, Tex. where many migrants just released from CBP custody go for a shower, clothes and food before heading to their next destination.

A spokesperson for the AAP said they did not know which facilities the children had been housed in or how long they were in detention, but added that many children who stop at the Respite Center have been through the Central Processing Center in McAllen, Texas.

Dr. Marsha Griffin, a pediatrician and spokesperson for AAP, toured the processing center, also known as the Ursula, last week. She said the children captured exactly what she saw there. The drawings, she says, are indicative of the trauma experienced by children in detention.

“Whether they have the words to tell someone their story, they can tell their story by what they draw,” Griffin tells TIME. “I think if you hear a child’s voice or a child’s depiction of what they’ve just been through, it can possibly awaken the consciousness of this country.”

Griffin says she has seen similar drawings since she began working with immigrant children on the border in 2007.

“What these children are experiencing is extraordinarily traumatizing and it can be seen immediately and it can be seen years later,” Griffin says. “These are the reasons we need to help the government how to take care of children.”

Conditions inside migrant detention centers have dominated headlines in recent weeks after a group of attorneys went public about unsanitary and inhumane conditions a Border Patrol facility housing migrant children in Clint, Tex. On Tuesday, the Department of Homeland Security (DHS) Office of Inspector General warned of prolonged stays in overcrowded facilities and highlighted security concerns at Border Patrol facilities in the Rio Grande Valley.

The House Oversight Committee is expected to hold a July 12 hearing to address conditions inside the detention facilities, and invited DHS Security Secretary Kevin McAleenan and CBP Commissioner Mark Morgan to testify. Neither have confirmed their attendance, according to the committee.

Haydee Alonso, an artist who has worked with migrants in detention, says she was saddened by the drawings shared by the AAP.

“The cages, those lines, those squares, are such a strong presence and I think that’s all they see and all they think about. This was their environment,” she tells TIME.

Alonso, who is a manager at the Hal Marcus art gallery in El Paso, Texas, hosted art workshops in 2016 where she worked with immigrant women in detention at the Otero County Prison in New Mexico. For two months she helped women share their stories through art, including creating maps of their journeys to the El Paso region.

“I think art helps you voice these things without having to overthink about it,” she says. “It’s interesting to see the color choices that they make, either colors that remind them of their hometown or they choose a blue or a black that really represents how they’re feeling or what they’ve gone through. I got to learn a lot about them without them being vocal.” 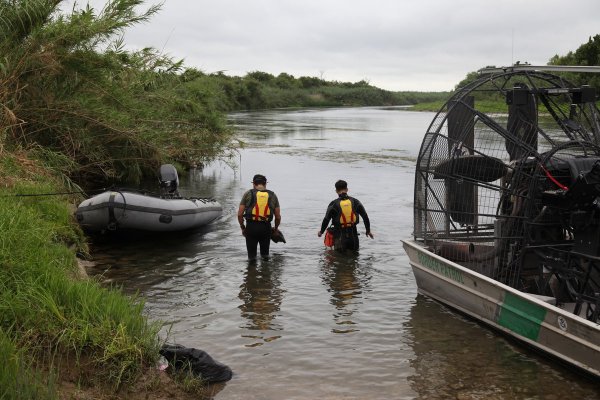 Search Continues for 2-Year-Old Lost In Rio Grande River
Next Up: Editor's Pick