What the U.S. Can Learn From How Other Countries Voted During the Pandemic

A poll worker wearing a medical mask and plastic gloves checks the body temperature of a citizen South Korean citizen, at a polling station at the country's general election amid the coronavirus outbreak in Seoul on April 15, 2020.
Jong Hyun –Anadolu Agency/Getty Images
By Ciara Nugent

COVID-19 has already transformed the American democratic system, realigning voter priorities and changing the way campaigns operate. It has forced states to overhaul procedures and dramatically expand early voting, with unprecedented numbers casting their ballots in advance. And, on Nov. 3, millions of Americans across 50 states will have to overcome the fear and uncertainty of voting amid the third wave of the pandemic.

But the U.S. is not alone. Dozens of countries, from Singapore to Bolivia, have held elections since the pandemic began in March. And they’ve dealt with many of the same issues – increased infection risk, the virus’ impact on turnout, and the expansion of mail-in voting – that American voters are facing. Here’s what the U.S. can learn from other countries that have held elections during the pandemic:

Holding elections doesn’t have to be followed by coronavirus spikes

It seems logical to expect that inviting the entire country to gather at voting stations, wait in lines, and handle voting materials all on the same day might speed the spread of COVID-19. But many countries have shown that social distancing and other precautions can prevent an uptick in infections after an election.

In mid-April, South Korea held parliamentary elections, becoming one of the first countries to hold a national vote since COVID-19 began spreading around the world in early 2020. South Korea had already been praised for its effective response to its outbreak, with widespread testing, a high-tech tracing system and quarantines for those exposed rapidly bringing new infections down from over 900 a day in late February to just 27 on the day of the April vote. Robust measures continued at the voting booth: voters had to wear masks and gloves and stand at least 3 ft apart from others. Authorities wearing protective gear conducted temperature checks, and brought anyone with a fever to vote in a separate area. After the election, which delivered a landslide victory to the center-left party of President Moon Jae-in, the rate of new infections continued to fall, with just fewer than ten per day being reported two weeks after polling day.

Other countries with less rigorous COVID-19 defenses managed to keep their rate of new infections stable by holding elections with safety measures in place. For example, in July, officials in North Macedonia carried ballot boxes to the homes of quarantined people so that they could vote safely in the country’s first parliamentary elections since it changed its name from Macedonia in 2019 due to a historic dispute with neighboring Greece. The number of new infections reported daily remained level or falling for the month after the vote, at between 90 and 160 cases.

Even in countries that did see a rise in cases after an election, it’s not clear that the voting played a decisive role. Singapore implemented safety measures, like setting limited time windows in which people could vote to avoid crowding, during its July 10 election. Infections still rose over the following weeks. But analysts say the increase was likely the result of lockdown measures being relaxed earlier in June.

Early in summer, voting rights activists and analysts expressed fear that the risk of catching COVID-19, and the general disruption caused by the pandemic, would lead U.S. voters to stay home in November, depressing turnout.

There was certainly precedent for that. At the delayed second round of France’s local elections in June, for example, almost 60% of voters stayed home, a near-record high. Some 43% of those who abstained cited the fear of infection as their reason, a poll found. At the Dominican Republic’s general election in July, voter turnout was 55% – well below the average of 70.40% over the last three elections, according to the Center for Strategic and International Studies.

But other countries have shown that when voters consider the stakes to be high, COVID-19 won’t keep them away. Electoral authorities in Bolivia recorded a record turnout of 87% at the country’s October election, when voters decided by a landslide to return the socialist party of controversial former president Evo Morales to power. In Poland’s July presidential election, where conservative hardliner incumbent Andrzej Duda defeated his socially liberal challenger by a tiny margin, turnout was 68%, the highest in decades.

In the U.S., the bitterly fought contest between President Donald Trump and Democratic candidate Joe Biden seems set to ensure a high turnout. More than 60 million U.S. voters – a quarter of the electorate – have already cast their ballots either in person or by mail. That’s 13 million more than the total number of early votes cast in 2016, with a week to go before election day. The strong showing has prompted some election analysts to predict that total turnout in 2020 could beat national records.

Ramping up mail-in voting is difficult, but it’s safer than switching to electronic voting

President Trump has repeatedly claimed that the wider use of mail-in ballots in 2020 increases the risk of voter fraud, telling viewers of the final presidential debate on Oct. 22, “there is going to be a fraud like you’ve never seen.” There is no evidence that mail-in voting leads to election fraud.

Rapidly expanding mail-in voting has some challenges, though, as elections around the world have shown. In Poland, the government’s attempt to replace in-person voting entirely with mail-in ballots ran into opposition from postal workers and rights groups, who argued that a lack of preparation would lead to “chaos” and leave many unable to vote. In the end, voting was mostly done in-person, with a postal vote option. The ballots of thousands of Poles living abroad, who had to vote by mail instead of in consulates or embassies because of the pandemic, went missing or didn’t reach electoral authorities in time.

Places with much smaller populations have managed to pull off an expansion of mail-in votes. The system has proved hugely popular at state elections in Queensland, Australia where, a week before the Oct. 31 vote, more than half of the electorate had already cast their ballot via mail. The high proportion of mail-in ballots is likely to delay the final result, but officials say it has kept the population safe and will relieve pressure on election day.

In spite of the complexities, experts say mail-in voting is safer than hastily introducing electronic alternatives for remote voting – championed by some Polish politicians and favoured by the public in some countries.

A paper published in April by U.S. nonprofit the International Foundation for Electoral Systems advised that no country without e-voting systems already in place “would be able — or should even attempt — to launch Internet voting as an immediate response to a crisis like COVID-19.”

App-based methods that have been tested in recent years have also posed “formidable security risks”, according to the Council on Foreign Relations. In February, for example, MIT researchers found that a blockchain based-app used for remote voting in 2018 midterms in West Virginia contained flaws that would allow a hacker to intercept and alter votes. For now, if voters want to avoid polling stations, mail-in ballots are the best option. 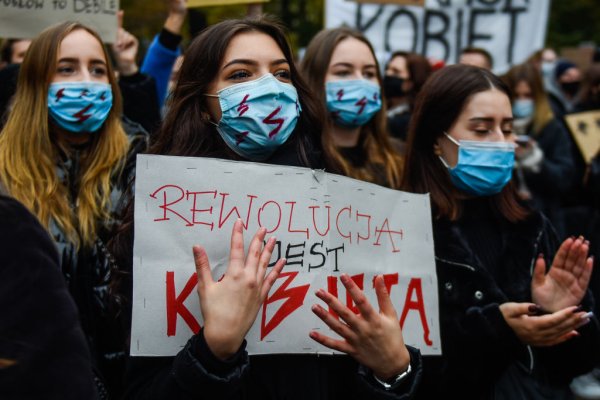