Without Florida, There’s Almost No Path for Donald Trump to Stay in the White House

Twenty years ago, NBC News’ Washington bureau chief and Meet the Press moderator Tim Russert rightly surmised that the outcome of the 2000 presidential election would come down to one state: “Florida, Florida, Florida.” It was a phrase that became meme-worthy before we even knew what that meant, and two decades later, it still holds true. There’s almost no plausible path to a second term for President Donald Trump without winning his adoptive home state.

This week in the D.C. Brief, we’re going to take the temperature in several key states that will decide who wins the White House on Nov. 3. Today, we begin in Florida, where voting is well underway and more than 5.6 million votes have been cast. Only once since 1964 has Florida not backed the national winner, so it’s not unreasonable to look at Florida as a kind of bellwether — a peculiar one, for sure, but one that cannot be ignored.

This week, the polls show a tight race. Neither party feels they have it locked in, and the candidates and their supporters are looking for every last kernel of support in a state that is seldom a blow-out or an outlier. Had Hillary Clinton flipped 56,456 Trump backers to her cause in 2016, she would have carried the state four years ago. Florida Republicans recognize the value of the state’s 29 electoral votes to any Trump retention of power. Right now, the Trump campaign isn’t talking about not winning Florida. During an Oct. 19 call, campaign manager Bill Stepien said the campaign sees “multiple pathways” to get to 270 Electoral College votes, but said, “We’re going to win Florida.”

Turn-out in Florida’s early-vote universe is already far-outpacing numbers seen in 2016 or 2018. The coronavirus pandemic is partly to credit. So, too, is the intensity around the choices on the ballot. Some analysts estimate that as much as three-quarters of the state’s ballots will be completed and in elections offices when Election Day arrives. That could mean Florida offers the country its first full diagnosis of Trump’s prospects. If Florida reports its results early on Nov. 3, it could be a leading indicator of how the rest of the evening may proceed.

Biden has other paths to the White House that don’t include Florida, but a Florida win would almost guarantee his win — by virtue of Trump’s loss. “If you bring Florida home, this thing’s over,” former President Barack Obama said on Saturday, appearing at a Biden event near Miami. “I won’t have to wait for the results. I want to go to sleep knowing we’re going to have a President fighting on our behalf.”

Democrats have slightly boosted their early-vote numbers among Black, Hispanic and Asian voters in Florida, but the biggest jump over 2016’s numbers has been among white voters with a college degree, according to new data from the Democratic data firm TargetSmart. Conversely, Republicans have seen a drop-off among white voters without a college degree casting their ballots early. That would suggest a shift in Biden’s favor.

Republicans rightly point out that Florida is among the GOP’s best chances of holding even with Democrats in swing states. In Florida, Republicans are holding Democrats to a narrow 4-percentage-point advantage in early votes. In Pennsylvania, Republicans are trailing by almost 38 percentage points. In New Hampshire, it’s 22 percentage points. So just keeping it close is a win in their book, given so many of Trump’s supporters plan to vote in-person on Election Day.

There are a few key demographics Republicans are banking on. Biden is behind where Clinton was with Florida’s Latino voters when she ran four years ago, according to several polls, including the latest CBS News/YouGov survey, The same poll found most of Trump’s voters have yet to cast their votes, while most of Biden’s supporters said they had already banked their ballots. The incumbent enjoys a 9-percentage-point lead over the former Vice President among those ages 65 and older, according to polling. It’s mighty tough to win Florida without seniors. Exit polls show Trump carried Florida seniors by 17 percentage points four years ago — or twice the advantage seen in polls today. In 2012, Mitt Romney carried seniors by 17 percentage points, as well; he lost the state by less than a percentage point.

Still, Florida and its quirky political identities are unpredictable. Voters there are having the most broadcast dollars thrown at them in the country. Biden and his outside allies have spent $154 million in Florida alone to date, while Trump and his pals have spent more than $103 million. The massive, $257 million chunk of broadcasting may be making TV almost unwatchable, but with door-to-door campaigning almost entirely shelved by the Democrats and curtailed among Republicans, broadcast remains an effective method to get the messages to voters.

For Trump, there is essentially no path to the White House without Florida. Biden doesn’t necessarily need it, but it could be a mighty strong roadblock. Even if Biden doesn’t carry the state, he will have depleted Trump’s campaign accounts and forced him to move energy from other swing states. We’ll talk about those in this space between now and Nov. 3. 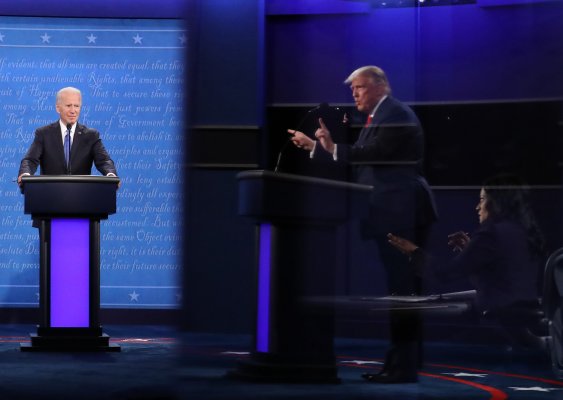