Even in a country that has suffered devastating terrorist attacks in the past five years, the macabre beheading of a schoolteacher Oct. 16 has stunned France, as politicians and regular citizens grapple with religious extremism in their midst—igniting a political battle that could threaten the prospects of President Emmanuel Macron.

Samuel Paty, a middle-school history and civics teacher, was on his way home from work Friday afternoon in a quiet suburban town north-west of Paris when an attacker cornered him on the street, and stabbed him repeatedly, before decapitating him. Witnesses say the killer, later identified as an 18-year-old of Chechen origin who came to France as a refugee, shouted “Allahu Akhbar.” “I have executed one of the dogs from hell who dared to put Muhammad down,” he wrote in a message briefly posted on Twitter, with a photo showing Paty’s severed head. Within minutes, the police tracked down the killer and shot him dead.

The gruesome murder—in retribution for Paty showing his students cartoons of the Prophet Mohammed —has cracked open a deep schism, that is rarely far from the surface in France. At issue is how the country’s 5.7 million Muslims—the largest Muslim population in the European Union—assimilate, or not, in a country whose constitution is based on an unyielding principle of secularism and which has seen multiple terrorist attacks by jihadists since 2015. Muslim leaders fear it will precipitate a crackdown that will deepen the divide between moderate and radical worshippers. “I fear that this attack will be the last drop that makes the water spill,” Hassen Chalghoumi, France’s best-known moderate Muslim cleric, tells TIME.

It also presents a steep challenge to President Emmanuel Macron, just 18 months before he faces re-election, that threatens to shift the national conversation to the turf of the country’s resurgent far-right. “This is the beginning of the grand maneuvre around the next elections,” says Emmanuel Rivière, CEO of the public division of the Kantar polling agency in France. The French leader is not well-suited to the current battle, he says; Macron faces a tough reelection contest in April 2022, for a second five-year term. “Macron is identified with the economy, with liberalism, with his international reputation,” he says. “He is not identified with crime and terrorism.”

Read more: ‘I’m in This Death Valley.’ A Conversation with Emmanuel Macron

The government has yet to address questions surrounding the police response to threats against the teacher. Eleven days before his death, Paty, 47, showed his eighth-grade students cartoons of the Prophet, taken from Charlie Hebdo, the satirical magazine notorious for lampooning religion that gunmen attacked in January 2015, killing 11 journalists. Paty’s students say he was giving a class on freedom of speech.

One Muslim student’s father posted a Facebook video denouncing Paty. That was then distributed by a self-proclaimed imam long known for his hardline Islamist views, along with the school’s address and Paty’s cell-phone number. Alarmed, Paty lodged a complaint with police. And yet the police failed to offer him protection—and indeed, when the killer surveilled the school last Friday, students are believed to have pointed out Paty to him. “Despite threats and calls for people to denounce the teacher, no one thought it could go this far,” one unnamed police source old Le Figaro newspaper after the killing.

The killing has been greeted with horror by many within France’s Muslim community. On Monday, Chalghoumi, who presides over the mosque in the largely Muslim Paris banlieue, or suburb of Drancy and has long promoted interfaith dialogue, visited Paty’s middle school, where a makeshift shrine of candles and flowers has grown over the past few days. There, he delivered a tearful speech about the “generation of hate” among French Muslims.

In schools that are largely Muslim, Chalghoumi tells TIME, many teachers now avoid discussing the Holocaust, despite it being part of the government curriculum, fearing the reaction from their students. “The moment you talk about the Holocaust they say, ‘it is for the Zionists,’” he says. “And it is impossible to talk about Charlie Hebdo in the banlieues.” After that attack in January 2015, he says, “many kids did not observe the minute’s silence in school.” He doubts that students will observe a minute’s silence for Paty either; the government has called for schools to mark his killing on Nov. 2, when students return from a two-week break.

Such frankness puts Chalghoumi under continual threat of attack, however. As we sit speaking in a café in central Paris, his two bodyguards stand close by, surveilling the room warily. “Without protection, I would have been dead long ago,” he says.

His fear now is that Macron’s government opts to crack down hard on those they deem to be extremists in response to rising political pressure. Conservative politicians here have seized on the murder as proof that the President downplayed and tolerated extremism, favoring liberalism over law-and-order crackdowns. “If the government had listened to us, maybe Samuel Paty would still be alive,” National Rally politician Sébastien Chenu said Monday.

On Tuesday afternoon, lawmakers in the National Assembly, who had gathered for what they had billed as an homage to Paty, engaged in a heated debate over the killing. “The government systematically refused our proposals about radical Islamists,” said Damien Abad, leader of the conservative opposition the Republicans, listing several measures that Macron’s government had rejected, including shutting radical mosques and deporting some foreign Muslim clerics. French Prime Minister Jean Castex said the government had successfully averted 32 terrorist attacks since Macron’s election in 2017. He accused Macron’s political foes of using the killing “to feed this polemic. It is not dignified under these circumstances,” he said.

On Wednesday evening the French leader will preside over a solemn national memorial to Paty in the medieval courtyard of Paris Sorbonne University—the oldest in France. Officials at the Elysée Palace said on Tuesday that the university had been chosen as “a monument symbolic of the spirit of Enlightenment.”

Yet even as France mourned, the crackdown was already under way. On Tuesday Interior Minister Gérald Darmanin ordered shut a mosque in the heavily Muslim town of Seine-Saint-Denis, outside Paris, which had disseminated the messages targeting Paty. Later Tuesday Macron and Darmanin visited another largely Muslim suburb to discuss with local leaders how to combat extremism.

Paty’s death came just two weeks after Macron delivered a major speech against Islamic separatism, calling for an “Islam of Enlightenment,” and he now plans to accelerate a proposed new anti-extremism law, requiring imams to train in France, and crack down on organizations that spread extremist or separatist ideas. It would also increase public funds for Islamic studies, as well as improve the crumbling, low-income housing in the banlieues around Paris, which for years has been a hotbed of violence.

Such measures might help stave off political threats from Macron’s right-wing opponents, the liberal cleric Chalghoumi says. “How can there be integration?” he says. “There has to be mixing in the banlieues, and in schools first.” He alsosays he is sure it would also please many Muslims, even while it risks evoking strong hostility from others. “We want action,” he says. “We do not want flowers and candles.” 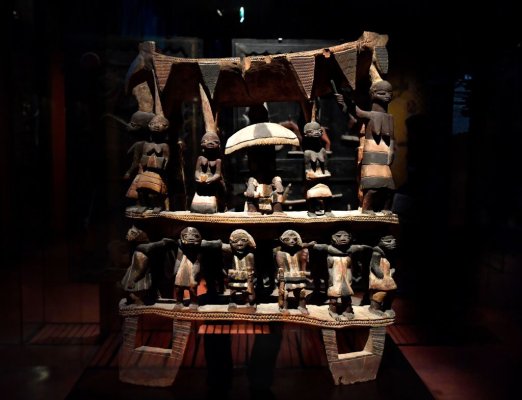