All These Terrible Quarantine Shows Are Giving Me Zoom Fatigue

A home health aide with no childcare and limited funds must decide whether to neglect her ailing patient or her young daughter. An overworked man neglects to mute a video chat with his colleague, accidentally forcing her to overhear him bicker with his newly unemployed boyfriend. With school canceled, a teen gamer uses every digital tool available to court her crush: Instagram, TikTok, Snapchat, Discord, VRChat. A dad racked with worry over his COVID-stricken wife struggles to distract their son, who desperately wants to see her and is too little to understand how gravely ill she is.

Sounds familiar, right? If you’ve been sentient in the developed world this past year, you’ve surely heard about—and quite possibly lived through—an experience similar to at least one of these scenarios. And you can revisit them starting Oct. 15 with Social Distance, an eight-episode Netflix anthology series from creator Hilary Weisman Graham and executive producer Jenji Kohan that chronicles our current, seemingly endless coronavirus quarantine through the all-seeing lenses of the devices we’ve used to stay connected. But I have to admit, as someone who has turned to TV (and movies, and books) since March for a sorely needed mental vacation from the present, I’m not sure why you would want to do that.

Television executives don’t seem to share my confusion. Since August, the small screen has been producing a stream of hastily put-together quarantine shows. Freeform’s Love in the Time of Corona—a four-episode miniseries whose title seems likely to have preceded its premise—came first, enlisting real-life actor couples and families in an ensemble dramedy that was less impressive for its content than as a feat of technology. Once intended for the stage, the HBO special Coastal Elites cast brand-name stars Bette Midler, Dan Levy, Issa Rae, Sarah Paulson and Kaitlyn Dever as fed-up cosmopolitan liberals in a series of monologues that take place during the winter and spring of 2020. And earlier this month, quarantine TV (should we call it quaranTV?) came to broadcast primetime with the premiere of NBC’s Connecting… A sort of virtual hangout comedy, the remotely shot series consists of video chats among a group of friends in L.A.

The shows aren’t quite carbon copies of each other. While most stories are mediated by technology, Love distinguishes itself by playing out mostly offline. If Coastal Elites is swimming in 21st-century prestige-TV signifiers, down to its title, then Connecting… belongs to the decades-old tradition of broad, jokey network sitcoms. The best of a uniformly disappointing bunch, Social Distance switches up its cast, tone and app of choice with every mercifully brief, 20-minute vignette: Oscar Nuñez leads a Zoom funeral, Danielle Brooks uses Wyze smart-home devices to be in two places at once, Ring observes a couple of retired physicians (played by Dylan and Becky Ann Baker) bickering over their pandemic public-health obligations. (The show can feel like either an accidental ad for surveillance capitalism or a PSA against it, depending on your perspective.)

The cast of 'Connecting'
NBC

Yet the many similarities between these projects seem more telling than their minor differences. Each cast features a wide range of personal identities, and not just in terms of race. They all include at least one major queer character, while Connecting… has Difficult People scene stealer Shakina Nayfack giving voice to what it’s like to be trans in a health crisis and Love casts the non-binary actor Tommy Dorfman as a non-binary young adult torn between their female roommate (Rainey Qualley) and a man they’ve been chatting with online (Jordan Gavaris). Though people in their 20s through 40s are egregiously overrepresented, all of the series except Connecting… find space for a brooding teen and a vulnerable boomer or two. Healthcare workers pop up every now and then but only provide brief reminders that the real COVID crisis is far more grim than the daily lives of healthy folks stuck at home.

It’s no surprise that Coastal Elites wears its exclusivity as a badge of honor. Midler’s ostensibly heroic Miriam is an Upper West Side theater lover who picks a fight with a stranger in a MAGA hat; in the special’s final monologue, a generic young nurse (Dever) from flyover country who came to New York during its devastating first wave tearfully recounts Miriam’s death from COVID. But the other shows aren’t much more democratic—and what we don’t see speaks volumes. With the exception of the rare Social Distance episode, the leads mirror the creators and stars: wealthy (or at least middle-class) city dwellers with white-collar jobs and left-leaning politics. The farther from that experience a story line is, the more hollow it rings, as if synthesized from newspaper headlines. A few characters are situationally broke, but none are poor. Nonwhite characters may be present, but they’re not situated within the low-income communities of color that have been hardest hit by the coronavirus.

As a result, the shows exist on a continuum from uncanny to unreal. They make shallow plays for universal resonance: who can’t relate to this couple who are driving each other nuts now that they’re together 24/7? Or this woman who started shopping online for necessities and can’t stop adding to her cart? Sure, many of us have had similar experiences. That doesn’t mean they cut deep enough to carry emotional weight onscreen. Connecting… bills itself as “a new comedy that’s sick of quarantine—just like the rest of us.” But it tries so hard to achieve broad representation that it forgets to convince viewers that a bougie gay dad in his 40s (Parvesh Cheena), a 20-something conspiracy theorist (Ely Henry) who wears a gas mask indoors, a pair of cute singles (Preacher Lawson and Otmara Marrero) engaged in a classic sitcom will-they-or-won’t-they and a doctor across the country in New York (Cassie Beck) would really all be part of the same friend group.

Some of the most disappointing scenes are responses to the Black Lives Matter movement’s resurgence in late spring that, though well intentioned, too often come off as trivializing. Love, Social Distance and Connecting… all depict characters processing videos of the George Floyd or Ahmaud Arbery killings. Yet in no instance, after a few minutes or a few episodes in their company, do we know those characters well enough to understand the nuances of what police violence means to them. Their shocked, then heartbroken, then angry reactions seem monolithic, designed to echo sympathetic viewers’ own responses, as if antiracist Americans (the only kind of Americans we see up close in these shows) all suffered the same pain in unison. Have we not learned by now that “we’re all in this together,” a sentiment repeated on a loop in the early months of the pandemic, is a way of shrugging off the disproportionate suffering of the most vulnerable? A more uncomfortable question: is it appropriate to keep replaying these real tragedies, just months after they happened, in the context of bittersweet comedies? Can’t we let the victims’ families and the activists fighting for their cause own these stories for a while longer?

I imagine that many people are living with too much grief and trauma to even consider tuning in to a lighter take on the pandemic. Indeed, if executives running out of new content to air have embraced quaranTV, audiences seem to be doing the opposite. Connecting… premiered on Oct. 8 to an audience of just 1.6 million—miserable ratings for a network show—while Love’s viewership topped out at around 200,000. More people may give Social Distance a shot, thanks to its strong cast, short episodes, Kohan’s built-in fan base and the heightened visibility that Netflix series tend to enjoy. That doesn’t mean the sketchy vignettes that make up this scattered anthology seem especially likely to linger in the restless 2020 zeitgeist.

Their shoddy construction, narrative blandness and sociopolitical myopia aside, what rankles about these shows is the gratuitousness of their very existence. Why would we want to listen in on a Zoom call between underwritten, stock-character strangers who are just as bored as we are when we could be participating in a Zoom call with actual friends or family? (This probably explains why remotely shot reunion specials from shows such as Parks and Recreation and Mythic Quest worked so much better: to fans, the characters already feel like old friends.) Why would we choose simplified, saccharine, faux-universal depictions of life in our dizzyingly complicated present when there are so many real, vital, specific stories that deserve our attention, from Jesmyn Ward’s annihilating Vanity Fair account of her husband’s illness and death not long before the coronavirus began to spread rapidly across the the U.S., and the George Floyd protests that followed, to the inspiring, infuriating pandemic episode of the Netflix docuseries Lenox Hill? There will be plenty of time—decades, probably, if past cataclysms like 9/11 are any indication—to apply the techniques of screenwriting to themes that have emerged over the past seven months. And that’s important work. But why turn to fiction when the truth is still unfolding? 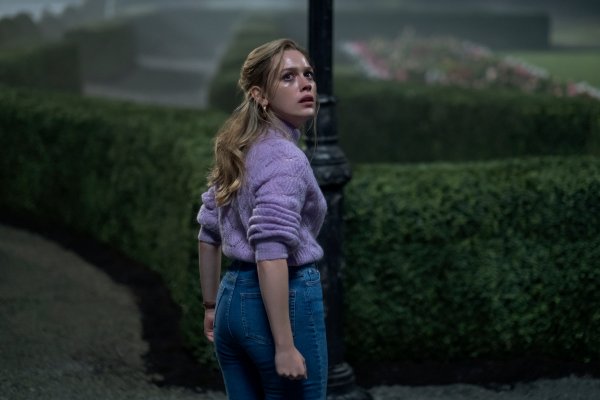 'The Haunting of Bly Manor' Reimagines a Classic Ghost Story
Next Up: Editor's Pick