Despite Protests, Democrats Have No Way to Stop Judge Barrett

Since the Supreme Court confirmation hearing for Judge Amy Coney Barrett began on Monday, you can hear the frustration, resentment and desperation in the voices of the Democratic members of the Senate Judiciary Committee as they sit through a process whose outcome is largely a foregone conclusion.

Barring a major reversal, Barrett is set to have her confirmation hearings wrapped by the end of the week. Votes are scheduled to start on Thursday — before the Judiciary Committee’s members even finish taking testimony. A confirmation vote by the full Senate is scheduled for the week of Oct. 26, just before Election Day.

Even as Judiciary Committee Chairman Lindsey Graham opened the first day of hearings yesterday — while the full Senate is out of session over fears of coronavirus transmission — he acknowledged the coming days will be about pantomime, not persuasion.

“This is probably not about persuading each other unless something really dramatic happens. All Republicans will vote yes and all Democrats will vote no,” said Graham, an ally to President Donald Trump. “I would just ask one thing of the committee: to the extent possible, let’s make it respectful, let’s make it challenging, let’s remember the world is watching.”

Democrats have few remedies, except to dutifully object and attempt to lay political traps, as they watch Barrett seem to cruise to a lifetime appointment that could change the balance of the Court for a generation.

To this point, Barrett has been predictably evasive when it comes to high-stakes questions about abortion rights, marriage equality and election administration. As the second day proceeded, the visibly frustrated Sen. Dianne Feinstein, the top Democrat on the panel, continued to press Barrett on abortion rights and precedent. “On something that is a major cause, with major effects on over half of the population of this country who are women, it is distressing not to get a straight answer,” she said on Tuesday.

The rapid pace is unlike anything seen in recent years, and the rush to find a successor for Justice Ruth Bader Ginsburg has taken on a political urgency. The Supreme Court may well decide elements of the 2020 election and is set immediately thereafter to consider yet another challenge to the Affordable Care Act, better known as Obamacare. To Democrats, whose own election-year Supreme Court nominee failed to get a single hearing in the Republican-controlled Senate in 2016, the entire process reeks of hypocrisy in the final hours before voters decide whether or not to make Trump a one-term President.

“We don’t have some clever procedural way to stop this sham, to stop them from rushing through a nominee. But we have a secret weapon that they don’t have: we have Americans who are watching,” said Sen. Amy Klobuchar, acknowledging Democrats’ inability to derail the lifetime position. “They know what this President and the Republican Party are doing right now is very wrong. In fact, 74% of Americans think we should be working on a COVID-relief package right now instead of this.”

But they’re not. In fact, talks on a coronavirus relief package are all but dead in Congress until after the election. Sending Barrett to the High Court seems to be the lone priority for Senate Majority Leader Mitch McConnell, who appears to have the votes needed to confirm Barrett.

In an earnest plea, Sen. Cory Booker looked for any last-minute defections, though nothing short of a miracle could help his effort. “If one of my colleagues will stand up on this committee, we can hold this over until after an election. If two of my colleagues on the Senate floor agree with their two other colleagues, Republicans, we can stop this,” Booker said, before turning back to the likely outcome. “Otherwise, this is a charade when they say this is a normal Judiciary Committee hearing for a Supreme Court nomination. There’s nothing about this that is normal.”

Democrats’ tactic at this point is to make Republicans pay a political price in three weeks when votes start to be counted. As TIME’s Tessa Berenson observed, Democrats are keeping their complaints focused on the future of Obamacare, a smart election-year pivot when they know they can do little practically to stop this. Democrats have decent odds of denying Republicans a Senate majority come January; they need to pick up three or four seats, depending on which party wins the vice presidency.

One of the contenders of the V.P. role, Sen. Kamala Harris, joined the Judiciary Committee remotely from her office on Capitol Hill and acknowledged Democrats’ limited powers — for now.

“Senate Republicans have made it crystal clear that rushing a Supreme Court nomination is more important than helping and supporting the American people who are suffering from a deadly pandemic and a devastating economic crisis,” she said. “Their priorities are not the American people’s priorities, but — for the moment — Senate Republicans hold the majority in the Senate and determine the schedule. So here we are.” 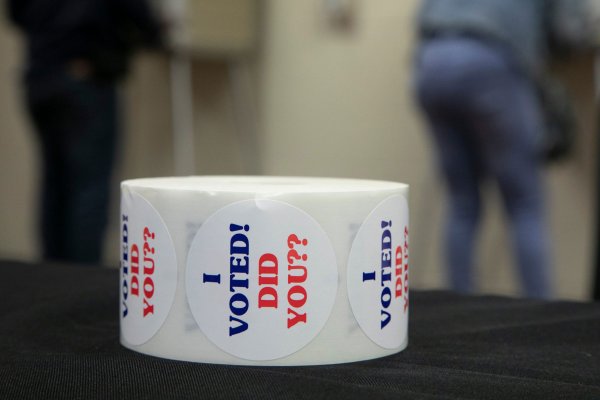