Why Obama Thinks the Senate's Inaction Is 'Dangerous' to Democracy

U.S. President Barack Obama (L) stands with Judge Merrick B. Garland, while nominating him to the US Supreme Court, in the Rose Garden at the White House, March 16, 2016 in Washington, DC.
Chip Somodevilla—Getty Images
By Massimo Calabresi

President Obama upped the stakes in his Supreme Court fight with Republicans during a conversation with students at the University of Chicago Law School yesterday, saying the GOP effort to block nominee Merrick Garland was not just damaging to the judiciary but a threat to democracy itself.

Obama began with arguments that have become familiar, and for many Americans, persuasive, since he nominated Garland last month to replace Justice Antonin Scalia, who died Feb. 13. Obama said it was “perfectly acceptable for Republicans to decide … to vote against [Garland] because [they] believe in something different on important issues.”

But not giving Garland a vote, a hearing or even meeting with him, Obama said, would lead to a downward spiral that could ultimately threaten the stability of America’s 227-year-old experiment in democracy.

If Republicans succeed in blocking Garland through the next election and then a Republican wins the White House, Obama said, the conflict will only get worse. “The Democrats [will] say, well, you know, what’s good for the goose is good for the gander, we’re blocking—we’ll wait four more years to see how the next president comes in.”

Obama then predicted that Senate Majority leader Mitch McConnell, who is leading the effort to block Garland, would “eliminate the filibuster possibility for Supreme Court justices as it was eliminated for the other judicial appointments.”

Nominating and confirming appointees to the Supreme Court would then become, Obama said, “a majoritarian exercise” based on “who controls the presidency and who controls the Senate. And if different parties control the White House and the Senate during that period of time, you’re not going to get any appointments done.”

Obama said such paralysis in the judiciary would be a “disaster” for two reasons. First the courts would be even more stretched than they are now, slowing the pace of justice. More ominous, Obama said, would be the undermining of public trust in the judiciary, which as the third branch of government, is supposed to be independent from Congress and the President and above politics.

“It gets much worse under these circumstances,” Obama said. “People then just view the courts as an extension of our political parties. Polarized political parties. And if confidence in the courts consistently breaks down, then you start seeing our attitudes about democracy generally starting to break down and legitimacy breaking down in ways that are very dangerous.” 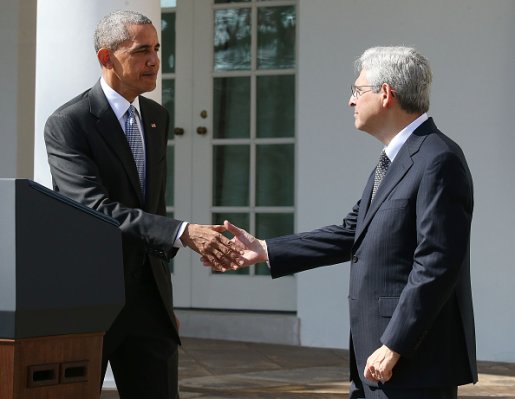 Obama Makes a Hometown Pitch for Merrick Garland
Next Up: Editor's Pick