During the first day of Amy Coney Barrett‘s Supreme Court hearing, Democrats revealed their main focus for the week as senators debate her confirmation: health care.

During the course of the day, every single Democrat on the Senate Judiciary Committee mentioned health care in their opening remarks. In a show of disciplined messaging, they honed in on fears that Barrett would overturn the Affordable Care Act (ACA) if she were confirmed to the Supreme Court — which is set to hear a case about the constitutionality of the Obama-era health care law just one week after Election Day.

“Health care coverage for millions of Americans is at stake with this nomination,” California Sen. Dianne Feinstein, the ranking member of the committee, said. She set up the plan of attack for the rest of the week: “My colleagues and I will focus on that subject.”

Barrett’s confirmation is highly likely. Even with two possible defections from Maine Sen. Susan Collins and Alaska Sen. Lisa Murkowski, Republicans would still have the votes to confirm her without any Democratic support. Republicans have been pushing to confirm Barrett before Election Day, which would lock in a 6-3 majority on the nation’s highest court for a generation.

South Carolina Sen. Lindsey Graham, the chairman of the Judiciary Committee, said Monday, “I think I know how the vote’s gonna come out.” But, he added, “This is going to be a long, contentious week.”

For both parties, Barrett’s hearing may be more about making a pitch to their base as voters head to the polls than changing their colleagues’ minds about the judge. Sen. Amy Klobuchar, a Democrat from Minnesota, said as much on Monday, addressing voters: “I doubt that it will be a brilliant cross-examination that’s going to change this judge’s trajectory this week. No, it is you. It is you calling Republican senators and telling them enough is enough,” she said. “It is you voting, even when they try to do everything to stop you.”

Democrats think health care is a winning issue for them, particularly with the added urgency of the coronavirus pandemic still raging throughout the country. Estimates suggest between 53.8 million and 133 million Americans have a pre-existing condition that could make them uninsurable if the ACA is struck down.

A Morning Consult poll from late September found 62% of voters support the ACA, and while 56% of voters say the ACA should be improved, just 20% say it should be struck down. Other polls find closer margins, but also with more Americans supporting the law: in March, Gallup found 52% of Americans supported the ACA, and in July, the Kaiser Family Foundation found that 57% of the public disapproved of the Trump Administration asking the Supreme Court to overturn the ACA.

Democrats have evidence that Barrett could be a vote against the ACA: In a 2017 law journal article at Notre Dame Law School, Barrett criticized Chief Justice John Roberts for his 2012 decision upholding a key provision of the law. “Chief Justice Roberts pushed the Affordable Care Act beyond its plausible meaning to save the statute,” she wrote.

Democrats on the committee painted a dire picture about what would happen to health care coverage if Barrett is confirmed. The “results would be nothing short of catastrophic,” said Vermont Sen. Patrick Leahy, noting that his constituents are “scared.” Rhode Island Sen. Sheldon Whitehouse called Barrett “a judicial torpedo [Republicans] are firing at the ACA.”

“Republicans finally realized that the Affordable Care Act is too popular to repeal in Congress,” said California Sen. Kamala Harris, the Democratic vice presidential nominee. “Now they’re trying to bypass the will of the voters and have the Supreme Court do their dirty work.”

Some Republican senators defended Barrett on the issue. Iowa Sen. Chuck Grassley said, “The legal questions before the court this fall are entirely separate” from what Barrett wrote about in 2017, arguing that no one can predict how she would rule on this case, or any other.

Other Republican senators claimed that judges shouldn’t make policy — a point Barrett also echoed in her first remarks after the senators had spoken. “The policy decisions and value judgments of government must be made by the political branches elected by and accountable to the people,” she said. “The public should not expect courts to do so, and courts should not try.”

Democrats put up poster-sized photographs inside the hearing room of Americans who rely on coverage from the ACA or have struggled with medical bills, and they talked about the individuals throughout the day to highlight the stakes of Barrett’s nomination.

“Health care is the number one concern for so many people in our country, and they are rightly terrified that Judge Barrett will provide the deciding vote to overturn the ACA,” said Hawaii Sen. Mazie Hirono, before sharing her own story about being diagnosed with cancer 3.5 years ago, and the expensive treatment she received that would “bankrupt almost every family in this country if they didn’t have health insurance.”

Barrett sat silently during the senators’ remarks, wearing a black mask with members of her family, White House Chief of Staff Mark Meadows and White House Counsel Pat Cipollone seated behind her.

Barrett’s hearing will surely get more heated in the coming days during rounds of questioning. But as Democrats made clear Monday they will spend much of the week focusing on health care, Barrett also laid out her judicial philosophy when it comes to policy disputes: “Courts are not designed,” she said, “to solve every problem or right every wrong in our public life.” 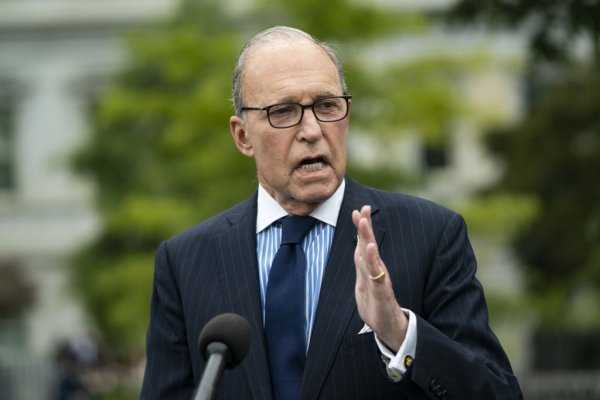 WH Aide Kudlow: Stimulus Not Needed for Recovery
Next Up: Editor's Pick