President Trump Has COVID-19. Nobody Knows What Happens Now

By Philip Elliott and Vera Bergengruen

President Donald Trump and First Lady Melania Trump tested positive for the coronavirus early Friday — 32 days before Election Day and while voters are already casting ballots. It’s a stunning reminder that the northwest gate of the White House, where senior staff, VIPs and journalists gain entry to the 18-acre complex, is made of metal bars and not medical masks or face shields. Campaign rallies, candidate debates and rope lines at airport pit-stops offer even fewer protections — even for the most powerful person in the world.

Nobody knows exactly what happens next. The President of the United States has contracted a disease that has killed more than 207,000 Americans and sickened some 7.3 million. It will undoubtedly add new chaos into an election season already in uncharted territory as a result of the global pandemic, the resulting economic downturn, a reckoning on racial justice and wildfires torching the American West.

The news comes after Trump, 74, and his Democratic rival, former Vice President Joe Biden, 77, met each other face-to-face on Tuesday night. On Saturday, Tuesday and Wednesday of this week, White House aide Hope Hicks traveled with the President and other aides to events in Pennsylvania, Ohio and Minnesota. The communications adviser tested positive for coronavirus herself on Thursday, prompting the President and First Lady to be tested.

A note from the President’s doctor, Sean Conley, said Trump and the First Lady “are both well at this time” and that they planned to remain within the White House as they recovered. He did not mention if they had any symptoms.“The White House medical team and I will maintain a vigilant watch, and I appreciate the support provided by some of our country’s greatest medical professionals and institutions,” he wrote. “Rest assured I expect the President to continue carrying out his duties without disruption while recovering, and I will keep you updated on any future developments.”

A note from President Donald Trump’s doctor, Sean Conley, said Trump and First Lady Melania “are both well at this time" after they tested positive for COVID-19 on Friday Oct. 2, 2020.
White House

Vice President Mike Pence tweeted shortly after the President’s announcement: “Karen and I send our love and prayers to our dear friends [President Trump] and [First Lady] Melania Trump. We join millions across America praying for their full and swift recovery.”

Leading health experts criticized White House staff, who said the President should have been better insulated from the coronavirus.

“This is a nightmare. COVID19 is a serious infection, especially for someone who is older like Mr. Trump,” Dr. Ashish Jha, a physician and the Dean of Brown School of Public Health, wrote on Twitter. “I can’t believe he was infected. This is a total failure by the [White House] team to protect the President.”

The grave news brings into relief how the global pandemic has hit pause — and poured accelerant — on a U.S. election that is unfolding with few precedents. As the White House coped with a potential contagion in the Executive Mansion, Biden’s campaign tried to seek some level of stability. The former Vice President made his way out of Cleveland on Wednesday across northeastern Ohio and into Pennsylvania. Social-distancing protocols were in place, and it’s not clear yet whether the Democratic nominee may also have been exposed to COVID-19.

But it’s also not clear what Tuesday night’s debate shouting match between two men in their 70s looks like from a medical perspective.

Medical experts said that each person responds differently to COVID-19, but older people are at higher risk of infection and having serious complications. Eight out of 10 COVID-19 deaths in the U.S. were people over age 65.

“It’s not a black and white picture at all,” says Lesley Russell, adjunct associate professor at Menzies Center for Health Policy at the University of Sydney and former health policy adviser to the Obama Administration. “We know this is a very strange disease and all sorts of things happen.”

However, doctors have also gotten much better at treating COVID-19 since the initial outbreak, and treatments are now available for severe cases, including the antiviral remdesivir and steroids.

For his part, the President announced he was quarantining at the White House. It was a departure from his stand-strong mentality that he has telegraphed to this point.

Trump’s consistent, sometimes outright hostility to mask-wearing politicized a key public health measure in the midst of the pandemic. He mocked Biden at rallies: “Did you ever see a man who likes a mask as much as him?” and was still doing so two days before contracting the virus himself. “I don’t wear masks like him,” he said on the debate stage on Tuesday. “Every time you see him, he’s got a mask. He could be speaking 200 feet away and he shows up with the biggest mask I’ve ever seen.”

Biden was working on his own reaction early Friday that conveyed the urgency of the moment without politicizing the diagnosis.

The contagion doesn’t just stop at the White House. Reporters who traveled with the President and Hicks to the Cleveland debate aboard Air Force One may have been exposed. White House Chief of Staff Mark Meadows has been busy on Capitol Hill escorting his Supreme Court nominee to meetings with Senators as recently as Thursday. It’s unknown whether White House staffers could have exposed a government building packed with octogenarians. Hicks is also close to the Trump children, putting the First Family further at risk.

Trump is not the first world leader to downplay the risk of COVID-19, only to become infected. Those leaders’ recovery may offer some clues for what’s ahead.

After contracting the virus in late March, British Prime Minister Boris Johnson continued to go to meetings and fulfill his duties until he displayed clear symptoms on April 5, including a cough and a fever. Johnson, 56, eventually had to be hospitalized for a week, where he spent three days in an intensive care unit and was given oxygen.

Brazil’s President Jair Bolsonaro, 65, spent almost 20 days in isolation after testing positive in July. Afterwards, he spoke on Facebook Live describing how he felt weak and might have “mold in the lung” and that he was taking antibiotics. His wife also tested positive and recovered around the same time. Before contracting COVID-19, Bolsonaro gleefully flouted social distancing rules at demonstrations and in crowds, often without a mask, downplaying the danger posed by the novel coronavirus which has infected more than 4.8 million Brazilians and killed 145,000 in the country.

“I’m healed from COVID. I have antibodies, no problems,” Bolsonaro said in the video touting his recovery. “In my particular case, I first thank God, and secondly, the medication prescribed by the presidential doctor: hydroxychloroquine.” According to numerous studies, the drug – which is usually used to treat malaria – is ineffective against COVID-19 or even harmful. Trump has also repeatedly touted it as a cure for the virus.

As for the reality in the U.S., Trump is now the most prominent American official in government office to have contracted the disease. After months of refusing to wear masks and downplaying the risks, the problem has found its way to the highest ranks of the U.S. government. No one — literally, no one — outranks the President.

Write to Philip Elliott at philip.elliott@time.com and Vera Bergengruen at vera.bergengruen@time.com. 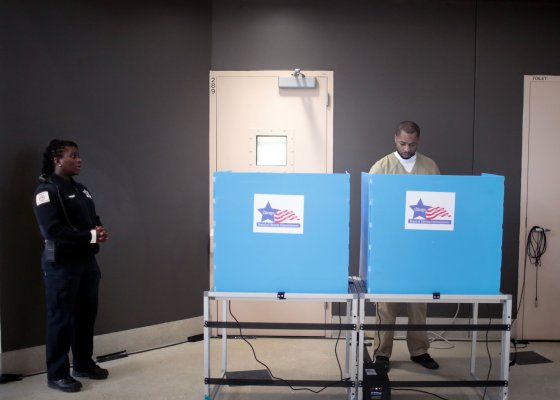 Thousands of People in Jails Could Miss Their Chance to Vote
Next Up: Editor's Pick