U.K.'s Boris Johnson Discharged From Hospital, But Isn’t Yet Ready to Govern

By Billy Perrigo and Madeline Roache

U.K. Prime Minister Boris Johnson was discharged from a London hospital but will not immediately return to work, government officials confirmed on Sunday.

“On the advice of his medical team, the P.M. will not be immediately returning to work,” said a statement from Johnson’s office, according to the Associated Press. “He wishes to thank everybody at St. Thomas’ for the brilliant care he has received.”

In a video statement he posted to Twitter on Sunday, Johnson reemphasized the importance of social distancing and expressed gratitude for Britain’s National Health Service (NHS) and the health care workers who took care of him.

Johnson also singled out two nurses — a woman from New Zealand and a man from Portugal — who stood by his bedside. “The reason in the end my body did start to get enough oxygen was because for every second of the night they were watching and they were thinking and they were caring and making the interventions I needed,” Johnson said.

On April 9, Johnson was moved out of intensive care where he had already been receiving treatment for three days after being diagnosed with COVID-19, authorities said.

On Tuesday, Foreign Secretary Dominic Raab, who is acting as Johnson’s deputy, said the Prime Minister had not been diagnosed with pneumonia. The Prime Minister is in “good spirits,” Raab said, and does not require invasive or non-invasive ventilation.

“I’m confident he’ll pull through because if there’s one thing I know about this Prime Minister, he’s a fighter,” Raab said, “and he’ll be back at the helm leading us through this crisis in short order.”

Johnson is “sitting up in bed and engaging positively with the clinical team,” Finance Minister Rishi Sunak added at Wednesday’s daily press briefing.

Johnson was the first world leader to test positive for the coronavirus on March 27. He was admitted to the hospital on April 5 and moved to intensive care the following day. His fiancee, Carrie Symonds, who is pregnant, is herself recovering from coronavirus symptoms.

While Johnson initially said he would continue to lead the government after catching the disease, cabinet meetings since his hospitalization have been headed up by Raab, who Johnson has nominated to deputize for him “where necessary,” a spokesperson said.

Read more: Boris Johnson Is Unable to Govern While He Battles COVID-19. Here’s How the U.K. Is Running Without Him

What do we know about Boris Johnson’s condition?

Johnson’s office says he has been discharged from hospital and will continue his recovery at Chequers, the prime minister’s country house, according to the Associated Press.

Johnson’s condition worsened after he was admitted to the hospital Sunday, and he was moved to intensive care on Monday at St. Thomas’ Hospital in central London — a stone’s throw from Westminster, directly across the River Thames from the British Parliament.

But on Wednesday and Thursday, government officials issued a series of positive updates saying Johnson’s condition had stabilized. “The Prime Minister had a good night and continues to improve in intensive care at St Thomas’ Hospital. He is in good spirits,” reads an official statement issued Thursday morning.

Johnson is not the only top British government official to be infected with COVID-19. His Health Secretary, Matt Hancock, also has the disease, along with his top advisor Dominic Cummings. His Chief Medical Officer, Chris Whitty, recently returned to work after self-isolating with symptoms of the disease. And Johnson’s pregnant fiancée, Carrie Symonds, said she has been suffering with symptoms of COVID-19 for the past week.

According to the U.K. government, as of 9am on 8 April a total of 232,708 people had been tested, of whom 60,773 were confirmed positive. As of 5pm on 7 April, 7,097 people who tested positive for coronavirus had died. The region hardest hit by coronavirus so far, both in terms of absolute numbers and the per capita rate, is London.

Johnson’s government has come under fire for testing fewer people than other countries at a similar stage in the outbreak. The number of confirmed cases is widely considered to be lower than reality, as a shortage of test kits means only people with the most severe symptoms—those who are hospitalized—are being tested.

With deaths in Britain still rising faster day by day, the “peak” of the outbreak is expected some time in the next week. That means Johnson’s hospitalization comes at a critical juncture for the country.

Shortly before Johnson was hospitalized on Sunday, in a pre-planned speech, Queen Elizabeth made a rare television appearance to reassure her subjects that “better days will return.” 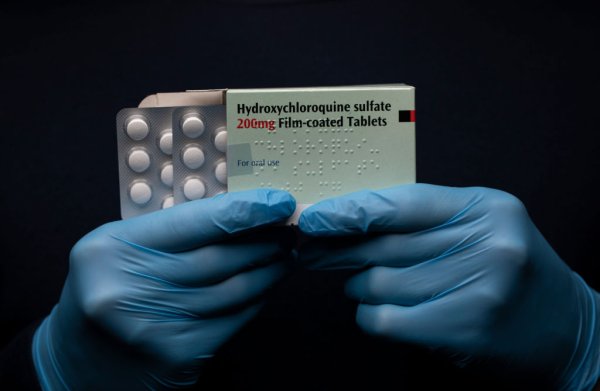 India Cuts off Half the Supply of Potential Coronavirus Treatment
Next Up: Editor's Pick