As Joe Biden met with community leaders in a Kenosha church on Thursday, roughly four dozen of the voters he needs to win Wisconsin waited on the street outside, several layers of brick away from the man running to be their President.

The crowd on the street outside Grace Lutheran Church represented the coalition that Biden is counting on to win the White House: moderate suburban women and disaffected Black voters, union workers and remorseful Donald Trump supporters, first-time voters and grizzled activists. Some may still need persuading. When asked why he was here to see Biden, one activist who refused to give his name said, “I’m not here to see him, he should be here to see us.”

Except Biden barely saw them. The campaign is extremely concerned about protecting both the candidate and his supporters from COVID-19, which is why Biden has so rarely traveled outside of Delaware since March, and why he has bucked tradition by not holding any in-person rallies. This trip to Kenosha, which came two days after President Trump staged a photo-op in front of buildings burned during the riots after Jacob Blake’s shooting, was his first trip to Wisconsin since the pandemic began. The visit took on outsize symbolic importance, both because of Biden’s light swing state schedule and because Hillary Clinton ignored Wisconsin in 2016, allowing Trump to narrowly carry a state that helped lift him to victory in the Electoral College.

The Vice President started his visit by meeting with members of the Blake family. Then he traveled to Grace Lutheran to hear from local leaders, including activists, business owners, religious leaders and police officers. Apart from a livestream of that conversation, the trip seemed designed to attract as little attention as possible: partly to avoid crowds, the campaign didn’t release the location of the event ahead of time, even to press. (I found it only by following road closures and scouting local police movements.)

The voters gathered outside the church didn’t seem to care much that they didn’t see the Vice President. Many said they planned to vote for him, whether they got a chance to see him in person or not. “I think people have formed strong enough opinions at this point, it might not make a difference,” says Emma Steidtman, 17, who turns 18 in a few weeks and will be voting in her first election. She plans to vote for Biden simply “because he’s not Trump.”

But in conversations with the people waiting outside for a glimpse of the Vice President, it was clear that his Wisconsin coalition was hanging together, if only barely.

Black voters are especially important to Biden’s math in Wisconsin, especially in the aftermath of the Blake shooting and the subsequent protests, which have left Kenosha blighted and deepened America’s racial strife. That’s why Biden traveled to Kenosha in the first place: to demonstrate his empathy for grieving families and his capacity to heal the nation’s wounds. Still, some Black residents greeted Biden’s visit with a response that was lukewarm at best.

“I just hope they get Trump out of office,” says Shaletha Mayfield, 36, a pharmacy technician standing on the lawn of a house across the street from the church. Her brother Jamar Mayfield, a 37-year old production technician, snorted, “I’m voting for Kanye.” Mayfield later clarified he was joking about voting for West, whose Presidential campaign has been boosted by GOP operatives in an apparent effort to divide Black voters. But the quip revealed how little he trusted Biden. Both siblings say they voted for Clinton in 2016 and plan to vote for Biden in November, not that it matters. “I think it’s rigged,” says Shaletha Mayfield. “I don’t think Biden stands a chance.”

Jamar Mayfield said he appreciated that Biden visited Blake’s family, but was skeptical of his motives. “Is he just trying to get a vote?” he said of Biden. “He’s said some racist sh-t too.” Mayfield added that he liked Biden’s running mate Kamala Harris, the first woman of color on a major party presidential ticket—especially the senator’s track record on rehabilitation programs for young nonviolent offenders.

Next to the Mayfields, Helen LeClaire, 64, wore jean shorts and a paisley-printed top and held a hand-painted sign that said “Attn: Suburban Housewives & Children: Wake Up!” LeClaire voted for Clinton in 2016, and says she plans to call her two sisters, both married to Trump-supporting Republicans, “and say if they love me, they better vote for Biden and not tell their husbands.”

David Sanchez waved a six-foot long Biden-Harris flag nearby. “I didn’t want Hillary. The way she spoke,” says Sanchez, 65, who says he voted twice for Obama and then for Trump in 2016. Sanchez, wearing a Harley Davidson T-shirt and a black bandana, said Trump lost his support after the President started a public feud with Harley Davidson. “He came out of the gate acting like a jerk,” he says with a sheepish shrug, adding that he had kept his 2016 vote mostly secret: “You’re the third person that I’ve told.”

Other Trump voters in the crowd said they were still undecided. “I’m scared sometimes he’s gonna get us blown up, but he’s brought the economy back,” says Debby Baartz, 43, who says she’s still weighing her options this year. Baartz, who drove over from a nearby town in Illinois, says she was disappointed when Biden didn’t come out to greet the gathered crowd as he left. “I understand it’s a very trying time, but this is when we need you,” she says. “This guy wants to be President? Come out and meet people.”

Democratic presidential nominee Joe Biden waves as he participates in a conversation with parents and educators in Wauwatosa, Wis., September 3, 2020.
Alex Wong—Getty Images

Trump has attempted to paint the racial unrest as evidence of the dangers of a liberal America, but some Wisconsin voters aren’t buying it. Dave Swartz, a 56-year old electrician, wore his International Brotherhood of Electrical Workers T-shirt and carried a handmade “Dump Trump” sign made with red electrical tape. “Trump said there’s gonna be civil unrest under Biden’s presidency, but we have this on Trump’s watch,” he says. “Trump is President, Biden isn’t.”

Swartz says the union leadership supports Biden, but many of the rank-and-file union members are still for Trump. “Somebody told me I was drinking the Kool-Aid,” he says. “But I prefer the blue Kool-Aid to the orange Kool-Aid.”

Biden ended his visit at a local home on a leafy street nearby, meeting with educators and parents about the challenges of starting a new school year during the pandemic. As he left the meeting, roughly 200 neighbors who had spilled out of their homes to see him from their lawns cheered “Let’s Go Joe.” This time, the Vice President walked out into the street to wave, and to offer a parting message: “Don’t forget to vote!” 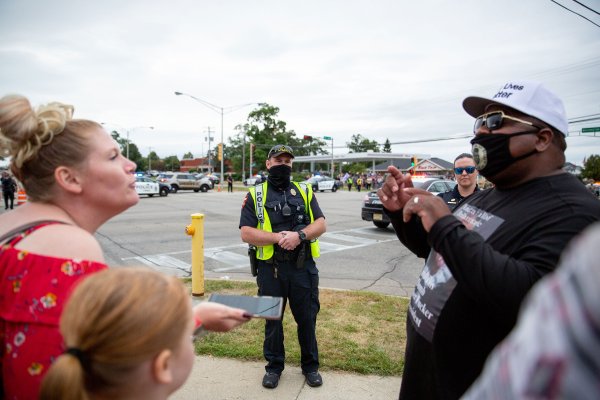