BLACKPINK on the Message of New Single 'How You Like That'

For many artists, reaching 10 million YouTube views is a commendable feat. But hitting that number is hardly a challenge for K-pop giant BLACKPINK, whose teaser for the new single “How You Like That”—a mere 20-second glimpse of the music video dropping on June 26—surpassed that many views within one day. That kind of immediate engagement is no surprise, given how long fans have waited for new music from one of the top girl groups in the world. After more than a year since the EP Kill This Love, Jisoo, Jennie, Rosé and Lisa are back with a new single releasing ahead of BLACKPINK’s full-length album slated for September.

In South Korea, idol groups typically release songs or albums two to three times a year—in part to help keep them front and center in an already competitive industry in which dozens of new acts debut each year. BLACKPINK, which came onto the scene in 2016, has maintained its megastar status with a much smaller discography than most other groups, favoring quality over quantity with their releases. Dynamic music and fierce choreography are a given in the music videos, but what has elevated the group’s popularity is the attention given to fashion and beauty in every project. BLACKPINK members have been the faces of global brands including Chanel, Dior, Yves Saint Laurent, Celine and more. The teaser photos for “How You Like That” could easily pass for the pages of an avant-garde fashion magazine, suggesting that, again, the styling of the single will be discussed as much as the sound.

Despite not making a comeback since April 2019, BLACKPINK has continued to break records. In addition to being the most-subscribed-to music group on YouTube, their single “Ddu-Du Ddu-Du” became the first music video from a K-pop group to reach one billion YouTube views last November. The members also embarked on the highest-grossing world tour by a K-pop girl group. Most recently, BLACKPINK collaborated with Lady Gaga on the track “Sour Candy” from her new album Chromatica. The part-English, part-Korean song marked BLACKPINK’s highest entry on the Billboard Hot 100 at No. 33.

Prior to the release of “How You Like That,” the group spoke to TIME over email about the message of the new single, the role that fashion plays in BLACKPINK’s releases and dropping music during a global pandemic. “This might sound grand, but we wanted to give a hopeful message,” the group says. “In whatever dark times or situations we encounter, we want everyone to have the strength and confidence to be able to rise up again.”

TIME: It’s been more than a year since you released your last EP, Kill This Love. How have you been spending your time, individually and as a group?

BLACKPINK: After releasing Kill This Love, we were pretty busy with our World Tour for a few months. We then started different projects while continuously working on our music. However, we were able to rest, spend time with family and friends, and recharge our personal lives.

This single is being released during the global pandemic and as coronavirus cases in multiple countries continue to rise. Do you think that changes the way in which listeners will process the message of “How You Like That”?

We believe that this song contains the message that even in the darkest times, we should persevere and fight through. We want everyone to find strength through our music.

Could you share an example of a time when you’ve personally persevered and fought through a darker time?

Last year, we had the opportunity to introduce our music to people around the world through our various activities including our EP release, world tour and Coachella. Although we were given such amazing opportunities, we were worried about how to relay our music in the best way possible. Through the fans’ support and with all of the members together, we were able to take it one step at a time.

Jisoo said in the “24/365 with BLACKPINK” prologue that if your previous songs gave off the vibe of being “strong and powerful,” this single is “more hip” and shows “swag.” Why did you take this new direction?

To show our unique BLACKPINK sound, we thought about what our fans wanted to see from us the most and what we could do best.

What do you think the unique BLACKPINK sound is?

We want BLACKPINK to not be defined as just one sound but a group that will always be able to change and develop. This song is a more intense hip-hop song that can be expressed while maintaining BLACKPINK’s original color and individuality. It includes powerful beats and an explosive drop so we’re really excited to see how our fans will react.

In terms of “what our fans wanted to see from us the most and what we could do best,” what do you think each of you do best? How are your individual strengths highlighted through BLACKPINK’s releases?

We keep thinking and longing about showing a new side of ourselves. It is important to be confident in ourselves and about the music and visuals we want to show. This eagerness and confidence were expressed in the overall message of the song, “to rise high in the midst of darkness.”

The teaser posters for “How You Like That” have received millions of engagements on social media, with heavy discussion around everything from your new hair colors to nail designs. How do your individual looks for this release help convey the message of “How You Like That”? More generally, what roles do beauty and styling play in BLACKPINK’s releases?

We believe that fashion plays a very important role when expressing our music. We feel like there is a synergy that really maximizes the power of our music when all of the vocals, emotions, dance, and fashion come together. Therefore, our stylists are very involved in the album-making process with us so that we are able to obtain the best results in terms of our fashion.

Your fandom has grown significantly since your debut in 2016. How have you changed the most in the four years since? What has made you proud?

We don’t think we’ve changed significantly since our debut and have maintained the same mindset. We are proud that as a group, we continue to release music that we are all satisfied with.

You are performing “How You Like That” for the first time on The Tonight Show Starring Jimmy Fallon. What role do you see BLACKPINK playing in bringing K-pop to the world?

We think we are just fulfilling our roles as artists and continuing to be the best we can be. We obviously want to make music for our fans, and want to keep reaching larger audiences because music is universal. 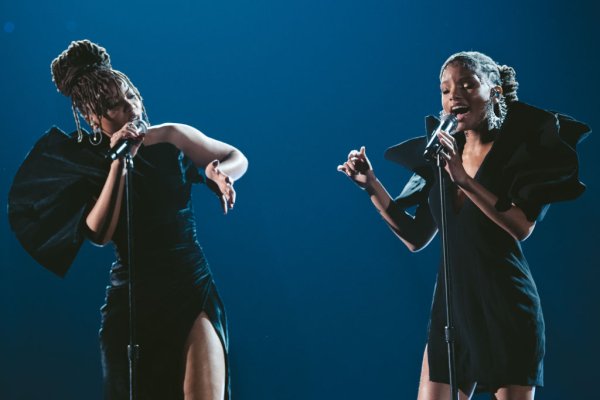 The Best New Songs of June 2020
Next Up: Editor's Pick