'It's a Sad Result.' Mixed Feelings in Hong Kong Over U.S. Announcement on City's Autonomy

Secretary of State Mike Pompeo said Wednesday that Hong Kong was no longer sufficiently autonomous from mainland China, following Beijing’s announcement that it plans to implement a national security law for the territory.

The proposed law, which sparked a fresh round of protests in the city, targets secession, sedition, terrorism and foreign interference in the enclave. It bypasses Hong Kong’s own legislature, which has not met its obligation to pass such a law since the territory was retroceded to China in 1997 after 156 years as a British colony.

“No reasonable person can assert today that Hong Kong maintains a high degree of autonomy from China, given facts on the ground,” Pompeo said in a statement. “The United States stands with the people of Hong Kong as they struggle against the [Chinese Communist Party’s] increasing denial of the autonomy that they were promised.”

The Hong Kong Human Rights and Democracy Act—passed in November 2019 following months of protests in Hong Kong—requires the State Department to complete an annual assessment to determine if Hong Kong remains sufficiently different from China. That assessment is needed to justify Hong Kong’s unique treatment under U.S. law.

Under the terms of the Hong Kong Policy Act of 1992, Hong Kong’s special status means Washington treats it as distinct from the rest of China when it comes to matters like trade and economic relations. Although the U.S. hasn’t yet set out what actions it will take following Pompeo’s announcement, the options include imposing immigration restrictions, export controls, and tariffs as well as sanctions on officials and individuals deemed to be aiding China in its encroachment on Hong Kong’s freedoms.

Eric Lai, the vice convener of the pro-democracy group the Civil Human Rights Front (CHRF), said Pompeo’s announcement meant the international community no longer believed Hong Kong’s rule of law and judicial independence were reliable safeguards against Beijing. He told TIME that the Chinese government would “pay a substantive price” for its actions in Hong Kong.

“The Hong Kong government and the mainland government have destroyed ‘one country, two systems,'” pro-democracy lawmaker Wu Chi-Wai told TIME, referring to the political formula under which Hong Kong was promised significant freedoms under Chinese sovereignty. “It is a sad result…It won’t do any good to Hong Kong people, but it reflects the situation that Hong Kong is no longer a place that can honor ‘one country, two systems.'”

Speaking to the media via a teleconference, David R. Stilwell, assistant secretary for East Asian and Pacific affairs, said that the U.S. will do its best “to ensure the people of Hong Kong are not adversely affected to the best we can.”

During a press conference on Thursday morning, pro-democracy activist Joshua Wong said that he didn’t think ordinary citizens would be impacted. “But I think for the ones serving the interests of Beijing, acting as the loyalists of the communist regime, of course they might face some of the results that might be negative for themselves. That’s the damage that they’ve done and the result that they need to bear.”

Jimmy Lai, a 71-year-old media tycoon who is among a group of prominent pro-democracy leaders in Hong Kong facing charges for their roles in the mass demonstrations that paralyzed much of the city throughout the second half of 2019, thanked Pompeo on Twitter. “The world will be a much better and peaceful place when #CCPChina is contained and #Hongkong is free,” he said.

“I am pleasantly surprised by the news,” a 27-year-old Hong Konger who participated in the 2019 anti-government protests told TIME. “I was expecting a reaction from America but did not see it coming so swift and strong.” But he says that he doesn’t think Beijing will back down, which may lead to economic pain and unemployment in Hong Kong depending on the actions the U.S. decides to take.

China has repeatedly warned the U.S. not to interfere in what it deems its internal affairs, and experts say that it’s unlikely that any actions the U.S. takes will change Beijing’s plans to implement the national security law.

An article posted by the state-backed Global Times on Thursday said that China may “strongly retaliate” if the U.S. increases pressure and “intervenes in China’s internal affairs.” That retaliation might include punishment of U.S. companies “involved in anti-China activities,” the article said.

“Whether China’s Hong Kong is autonomous, how could it possibly be up to the U.S. to define?” Hu Xijin, the editor-in-chief of the Global Times, questioned on Twitter.

“The Communist Party has been moving steadily down the road toward tightening control over Hong Kong for years now, and Xi Jinping is determined to project an image of himself as a strongman leader who can stand up to pressure from foreign powers,” Jeffrey Wasserstrom, historian and author of Vigil: Hong Kong on the Brink, told TIME.

“I don’t think that China will change its mind,” said Jean-Pierre Cabestan, a political-science professor at Hong Kong Baptist University. “There is not much room for changing the gist of the law.”

Pro-democracy politician Eddie Chu told TIME that the revocation of Hong Kong’s autonomous status alone won’t be enough to spur Beijing into action. “I think if the U.S. really wants to push back [against] China on this issue of the national security law, it needs to include Taiwan in the game,” he says. “The only thing that can frighten [Chinese President Xi Jinping] is to warn about reestablishing diplomatic relationship with [Taiwan].” 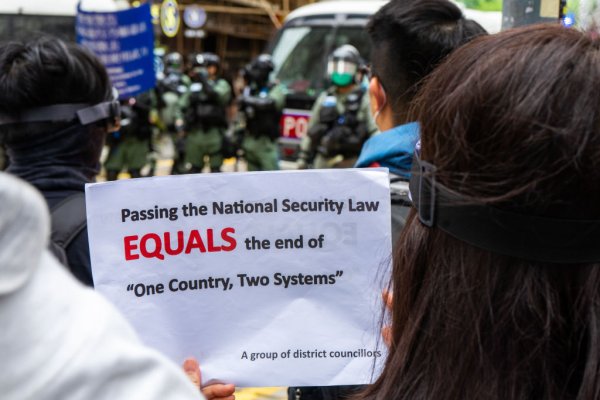