Trump Just Signed Off on Legislation Aimed at Protecting Human Rights in Hong Kong. Here's What to Know

Trump signed into law Wednesday an act supporting the protests in Hong Kong, which have raged for nearly half a year. The bill, known as the “Hong Kong Human Rights and Democracy Act,” was overwhelmingly passed in Congress with rare bipartisan support last week.

Protestors are heralding the passage of the act as a victory, believing it could pressure the Hong Kong government into acceding to their political demands. But the policy would likely further strain the U.S.-China relationship, which is already hampered by a bruising trade war. Chinese officials have ominously warned of harsh countermeasures against the U.S. for interfering in what Beijing calls “internal affairs.”

As the U.S. reaffirms its support for the city’s movement, here’s what to know about it.

What is the “Hong Kong Human Rights and Democracy Act”?

The legislation aims to safeguard Hong Kong’s civil rights and freedoms by linking the former British Colony’s special trade status to its continued autonomy from Beijing,

The act entails a State Department-led annual assessment of whether Hong Kong retains sufficient political autonomy to continue to qualify for favorable trading terms with the U.S. Any officials deemed responsible for violating human rights could face sanctions and visa restrictions.

Of concern is the “high degree of autonomy” that Beijing promised Hong Kong when the entrepôt retroceded to Chinese sovereignty in 1997. Fears over how China’s encroachment will transform the city helped fuel demonstrations that have plunged the Asian financial capital into escalating violence for the past five months.

The protesters have appealed to the international community for support in their fight with Beijing. At rallies for the democracy act staged around the world, supporters have waived U.S. flags and called upon Trump to “save” Hong Kong.

Activist Joshua Wong traveled to Washington in September to testify before Congress. In an interview with TIME after his trip, he said the passage of the act would start “a new chapter of bipartisan consensus on a tougher approach to Hong Kong’s democratization.”

Read more: Now Is the Time for the U.S. to Stand With Hong Kong

What has Trump said about the law?

Prior to the signing of the act, Trump was largely silent about the protests in Hong Kong, once saying that Hong Kong is a part of China and “they’ll have to deal with that themselves.” In August, the President appeared to show solidarity with the protests in a bid to gain leverage in trade talks with China as he called on Beijing to “work humanely” with Hong Kong.

In a White House statement released shortly after Trump approved the act, he said he turned the bill into law “out of respect for President Xi, China, and the people of Hong Kong,” and hoped it would prompt leaders in mainland China and Hong Kong to “amicably settle their differences leading to long term peace and prosperity for all.”

How has Beijing responded?

Beijing has denounced the legislation as an intrusion on its sovereignty. A statement published Thursday by China’s Ministry of Foreign Affairs said the passage of the law reveals the U.S.’s “sinister intentions” and Beijing “firmly opposes” its signing. “We advise the U.S. not to act arbitrarily, otherwise we will resolutely counteract,” it warned.

The Hong Kong and Macao Affairs Office issued a “strong condemnation” of the signing of the act and called the U.S. the “biggest black hand.”

Communist mouthpiece Global Times said last week that the policy should be renamed the “Support Hong Kong Violence Act” as it has “overtly taken sides with rioters who are destroying the rule of law.”

Why is Hong Kong’s trading status so important?

Hong Kong was granted special trade status under the 1992 United States-Hong Kong Policy Act, which says the city should continue to be treated as a “separate territory” from the Chinese mainland “in economic and trade matters.”

The status has meant that as trade tensions between the U.S. and China escalate, Hong Kong’s exports are exempt from U.S. tariffs and other protectionist measures on Chinese goods.

But experts warn that any termination of Hong Kong’s special status would hinder not just the city and Beijing, but also U.S. business interests. According to the State Department, more than 1,300 U.S. companies operate in Hong Kong, benefiting from proximity to China, as well as the city’s independent judiciary and rule of law.

For now, the act is mostly symbolic, since any adjustments to the trade status hinge the conclusions of an annual review, says Willy Lam, an adjunct professor at the Chinese University of Hong Kong. “For the protestors and the pro-democracy camp, this is a fairly important piece of moral support coming from the U.S.,” he says. 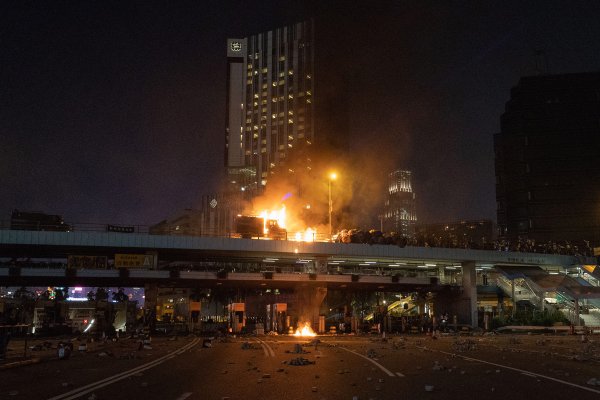 Inside the 'Functioning City' at Besieged H.K. Campus
Next Up: Editor's Pick