By Jasmine Aguilera and Josiah Bates

The image of a police officer’s knee weighing down on George Floyd’s neck gives Luz Maria Gonzalez nightmares. Just a few months ago, before the start of the COVID-19 pandemic, she was sharing chicken wings with him at the Conga Latin Bistro in Minneapolis, where Floyd worked as a security guard.

“I was having nightmares that I was being choked,” Gonzalez tells TIME. “I couldn’t sleep, I just kept having dreams of him dying and then I couldn’t breathe.”

Luz was among the hundreds of protesters who gathered Tuesday night at the 3700 block of Chicago Avenue, where Floyd had been pinned to the ground during an arrest, and called for the four Minneapolis Police Department (MPD) officers involved to be charged with murder. The demonstrators were met with tear gas canisters and flash grenades released by police to disperse the crowds.

Protests have also sprung up outside of the city’s police headquarters.

A memorial left for George Floyd, at the scene where an officer pinned him down a day earlier, in Minneapolis on May 26.
Kerem Yucel—AFP/Getty Images

Authorities in Minnesota as well as the FBI are investigating Floyd’s death after a widely circulated video showed a white police officer pressing his knee down on Floyd’s neck during an arrest. Floyd, a black man, can be heard saying repeatedly that he couldn’t move or breathe; onlookers can be heard in the footage repeatedly asking the officer to remove his knee, and to offer Floyd medical assistance.

George Floyd’s sister, Bridgett Floyd, told Good Morning America that she hasn’t watched the video. “Everything that I’m being told, I’m just imagining it in my head,” she said. “It’s very heart breaking… I have boys. That’s very, very scary for me. That could happen to them.”

Floyd was unarmed at the time of his arrest, according to the MPD.

The four Minneapolis police officers involved in the arrest have been fired after public outcry and protests, Minneapolis Mayor Jacob Frey confirmed Tuesday. “This is the right call,” he said.

The family is calling for the officers to be charged with murder. “They took a life, now they deserve life,” Philonise Floyd said.

George Floyd died Monday after being pinned to the ground by an officer who pressed a knee into his neck in Minneapolis.
Courtesy of Ben Crump Law

“We all watched the horrific death of George Floyd on video,” Crump said in a statement. “How many ‘while black’ deaths will it take until the racial profiling and undervaluing of black lives by police finally ends?”

Crump did not immediately respond to TIME’s request for comment.

Floyd, 46, grew up in Houston, Texas, where he was known as a gifted athlete and hip-hop artist, according to the Houston Chronicle. A former high school classmate told The Associated Press that George was “a gentle giant.”

George had “a quiet personality but a beautiful spirit,” Donnell Cooper told The AP. “It’s just so sad, the world we’re living in now.”

In Minneapolis, he was a familiar sight for many who frequented Conga Latin Bistro, which became a dance club by night, Gonzalez says. “He’d keep us safe there,” she says.

“Siempre te recordaremos,” the restaurant shared on Facebook Tuesday — Spanish for “we’ll always remember you” — along with a photo of a smiling Floyd wearing a blue security outfit. Conga Latin’s owner, Jovanni Thunstrom, also shared his shock at learning of Floyd’s death.“ Watching this video makes tears come out,” he wrote. “My body is full of emotions, of questions without answer.”

“He would dance badly to make people laugh,” Thunstrom told The AP. “I tried to teach him how to dance because he loved Latin music, but I couldn’t because he was too tall for me. He always called me ‘Bossman.’ I said, ‘Floyd, don’t call me Bossman. I’m your friend.”

According to the MPD, officers were responding to a report of forgery at a delicatessen on Monday evening. Officers arrived and saw Floyd, who they believed to be a suspect, in his car and told him to get out. Police claim Floyd then “resisted arrest.”

Officers were able to restrain him handcuffs, but Floyd “appeared to be suffering medical distress,” the police statement continued. An ambulance was called but Floyd later died at the hospital.

Vanita Williams, who witnessed the arrest, told BuzzFeed News that she knew Floyd from his work as a security guard at a homeless shelter. “He gave us hugs, and told us it was going to be OK,” Williams said. “He was such a big brother to me.”

During a Tuesday press conference, Mayor Frey said what he saw in the video was “wrong at every level.”

“He was someone’s son, someone’s family member, someone’s friend,” Frey continued. “Being black in America should not be a death sentence.” Frey also offered an apology to Floyd’s family and the black community as a whole.

“The cruel display of the state-sanctioned murder that took place in Minneapolis is yet another repugnant show of violence by the police,” said Leslie Remond, President of the Minneapolis NAACP, in a statement “The actions of the officers involved are inexcusable and warrant swift consequences.”

Floyd’s death is just one of a disturbing number of racially charged incidents against black people gaining national attention. The same day Floyd was killed, a woman in New York City’s Central Park was filmed calling police on a black man, Christian Cooper, who had asked her to put her dog on a leash.

Earlier this month, another black man, Sean Reed, was killed fatally shot by an Indianapolis police officer who was chasing him for driving “recklessly.” The shooting was streamed live on Facebook.

A man leans out of his car and with a raised fist as protesters march by decrying the killing of George Floyd in Minneapolis on May 26.
Stephen Maturen—Getty Images

Ahmaud Arbery, was shot and killed in Georgia in February. Only after video surfaced in early May of his death at the hands of two white men were the men arrested. (The shooting was caught on camera by a third man, who has since also been arrested.) They now face hate crime charges.

“This thing that happened to him was horrible,” Gonzalez says, through tears in an interview before the protest. “It should not have happened to him, it shouldn’t happen to anybody.”

The original version of this story misstated George Floyd’s name in one instance. It is George Floyd, not George Lloyd.

Write to Jasmine Aguilera at jasmine.aguilera@time.com and Josiah Bates at josiah.bates@time.com. 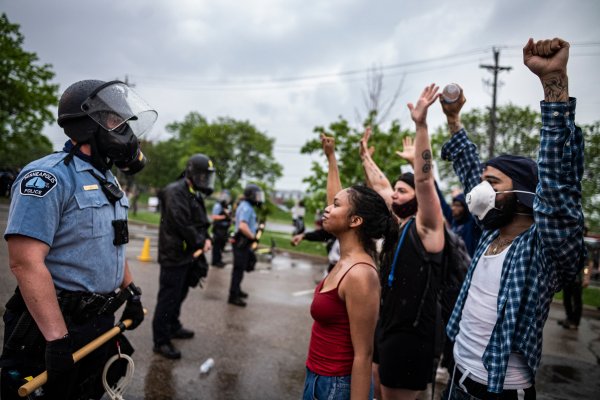