A 21-year-old black man was fatally shot by Indianapolis police on May 6 in an altercation streamed live on Facebook. According to the Indianapolis Metropolitan Police Department (IMPD), officers began pursuing the individual after they noticed him driving “recklessly” and attempted to pull him over.

While he has not been named by authorities, the victim has been identified as Dreasjon “Sean” Reed by family members and local media outlets.

The police shooting, along with the widely-shared video footage, has sparked a call for answers and accountability, and led to protests at the scene of the victim’s death.

What happened to Sean Reed?

Around 6 p.m. on Wednesday evening, an IMPD officer reported noticing a car driving dangerously on the I-65 interstate. Officers, including IMPD Chief Randal Taylor, began to chase the vehicle, which police say was speeding and had allegedly almost struck other cars.

Reed is seen driving in the Facebook Live video which is believed to show the chase, and appears to be speaking to his viewers. As he parks his car, he gives out his address and asks for help, saying “please come get me.”

Police say that the victim ignored verbal commands to stop as he exited his car, though none of the commands are audible in the portion of the stream which showed Reed leaving his vehicle. In the video, as the victim runs, someone is heard in the background telling him to stop.

Gunshots are heard shortly after that — over a dozen in total. According to police, there “was an exchange of gunfire between the driver and the officer.” While Reed was shot, the officer engaged with him was not.

Authorities have said the officer fired a taser at Reed during the chase on foot.

Some time after the shooting ends, a conversation between officers responding to the scene is heard on the video, which was still streaming. At one point, a male voice says, “I think it’s going to be a closed casket homie.”

What is happening with the investigation into Sean Reed’s death?

“Our city had a tragic, challenging evening last night,” Chief Taylor said at a May 7 press conference today. Authorities say a loaded gun was found near the victim; Taylor noted that there has since been speculation online that Reed was not the gun’s owner.

“While we continue to process the scene I believe it’s reasonable to believe that this gun was the individual’s,” Chief Taylor said. “It is a distinct looking gun… we are aware of photos of the driver holding a similar distinct looking weapon.” He added that police found 15 shell casings at the scene, and claimed that the gun police believe to be Reed’s was fired at least twice.

The officer who shot Reed, who the IMPD has said is also black but has not otherwise identified, has been placed on administrative leave. There is no police bodycam footage of the shooting; an internal investigation has been launched.

Chief Taylor also addressed the “closed casket” comments broadcasted on the Facebook live video and confirmed they were made by a detective who was not present at the time of the shooting but later responded to the scene.

“His comments are unacceptable and unbecoming of our police department,” Chief Taylor said, adding that there will be disciplinary actions.

On May 8, Indianapolis Mayor Joe Hogsett said that he asked the U.S. Attorney’s Office along with the FBI to monitor the investigation into the shooting, according to the Associated Press.

Ryan Mears, the Marion County Prosecutor, said that he is asking the court to allow an independent prosecutor to handle the shooting investigation, the AP reports.

What have activists and the victim’s family said?

“I shouldn’t have to bury my little brother,” Jazmine Reed, Sean Reed’s sister, told NBC affiliate WTHR, adding that she learned of his death while watching his live-streamed video.

Members of Reed’s family attended the scene of the shooting later that evening, joined by over 100 community members. Community activists and protesters chanted “no justice, no peace” at the scene, according to the Associated Press.

“We join many in the community by calling for a prompt, thorough, and transparent investigation into the deadly shooting of Sean Reed,” the ACLU of Indiana said in a statement. “The public deserves to get a detailed account of why this man was shot.”

A subsequent protest at the site of Reed’s death descended into chaos over the weekend, when police arrested a man on suspicion of disorderly conduct and fired pepper balls at people as they approached the officers trying to make the arrest.

“During the arrest IMPD Officers were forced to use pepper ball deployment to deter a crowd as they closed in on officers creating an unsafe environment for Officers and Protesters,” Michael Hewitt, a spokesperson for the IMPD said according to the Indianapolis Star.

The rally in turn grew, with over 100 people in attendance and protesters heard shouting “What do we want? Body cams. When do we want them? Now,” the IndyStar reported.

A second fatal police shooting had also occurred just after midnight on May 6 as IMPD officers shot and killed a man while investigating a burglary. According to police, the man had a rifle and shot at the officers who were responding to the call. They fired back and killed him.

That same day, a police officer hit a pregnant woman with his car as he was on his way to work. The officer tried to provide first aid to the woman but both she and her baby were pronounced dead at the hospital.

The NAACP branch of Indianapolis released a statement on May 7, saying their hearts are with the families of those who have been killed and that they will be monitoring the investigation.

“All of us are trying to make a new normal in an un-normal time. Incidents like these do not help restore normalcy to our community,” the statement read. 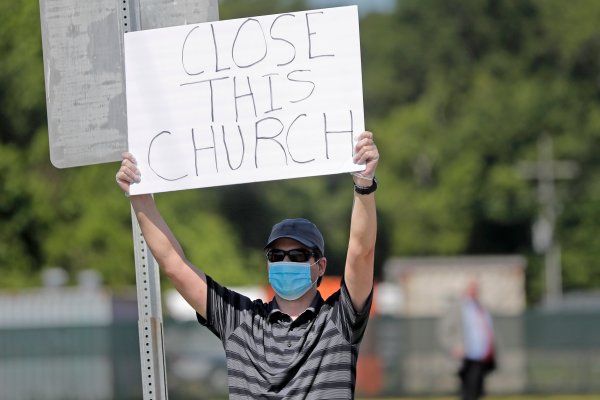