White Woman Who Called Police on a Black Man at Central Park Apologizes, Says 'I'm Not a Racist'

In a video that has gone viral, a white woman holding her dog by the collar in New York City’s Central Park can be heard saying “I’m calling the cops…I’m gonna tell them there’s an African American man threatening my life.”

The woman, since identified as Amy Cooper, apologized for making the call in a Monday evening interview with NBC 4 New York. “I sincerely and humbly apologize to everyone, especially to that man, his family,” she said. “It was unacceptable and I humbly and fully apologize to everyone who’s seen that video, everyone that’s been offended…everyone who thinks of me in a lower light and I understand why they do.”

“When I think about the police, I’m such a blessed person. I’ve come to realize especially today that I think of [the police] as a protection agency, and unfortunately, this has caused me to realize that there are so many people in this country that don’t have that luxury,” she added.

The video was recorded Monday morning by Christian Cooper, who describes himself as an avid bird watcher. He was visiting an area of the park that morning called The Ramble, home to approximately 230 different species of birds and frequently visited by bird watchers.

That is where Christian Cooper encountered Amy Cooper (no relation) with her unleashed dog, despite park rules, and their altercation ended with her calling the police. It is being described on social media as another example of white people calling police on black people in the middle of the mundane, like barbecuing, checking into an Airbnb, or napping in a dorm common room.

Christian Cooper’s video only shows part of the altercation, but according to his Facebook post, he asked Amy Cooper to keep her dog on its leash. When she refused, Christian Cooper offered the dog a treat. “I pull out the dog treats I carry for just for such intransigence,” he wrote on Facebook describing the encounter.

“The only way they can keep the dog from eating the treat is to put it on a leash,” Christian Cooper also told NBC 4 New York. “At some point, she decided I’m gonna play the race card, I guess.”

That is when Christian Cooper began recording. As of Tuesday morning, Christian’s Cooper’s video has been been seen more than 475,000 times on Facebook and nearly 20 million times on Twitter.

In the video, Amy Cooper can be seen dragging her dog by its collar to confront Christian Cooper. “Can you please stop? Sir, I’m asking you to stop [recording],” she says.

“Please don’t come close to me,” Christian Cooper can be heard responding.

“Then I’m taking a picture and calling the cops,” she says.

She walks away from Christian Cooper to call officers, still holding the dog by its collar as it wrangles to get free. “There is an African American man—I am in Central Park— he is recording me and threatening myself and my dog,” she says on the phone.

Christian Cooper did not respond to TIME’s request for comment, and Amy Cooper couldn’t be reached.

The New York Police Department tells TIME in a statement that they received a call at approximately 8 a.m. “Upon arrival, police determined two individuals had engaged in a verbal dispute. There were no arrests or summonses issued; both parties went on their way,” the police department said.

Amy Cooper also apologized in an interview with CNN. “I’m not a racist. I did not mean to harm that man in any way,” she said.

She has voluntarily surrendered her dog to the Abandoned Angels Cocker Spaniel Rescue, Inc., where the dog had been adopted from years ago, according to a public statement by the rescue agency. “Our mission remains the health and safety of our rescued dogs. The dog is now in our rescue’s care and he is safe and in good health.”

Christian Cooper told CNN he recorded the incident because he believes it is important to provide documentation. “Unfortunately we live in an era with things like Ahmaud Arbery, where black men are seen as targets. This woman thought she could exploit that to her advantage, and I wasn’t having it,” he said.

Asked whether or not he’d accept Amy Cooper’s apology he said, “if it’s genuine and if she plans on keeping her dog on a leash in the Ramble going forward, then we have no issues with each other.” 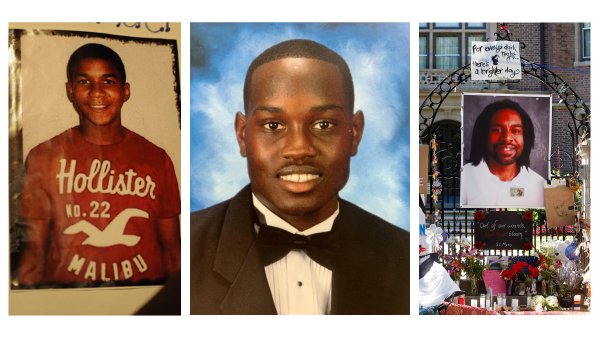 Unreasonable Fear Is Killing Black Men in America—And There's No Justification For It
Next Up: Editor's Pick