A fresh round of protests broke out on Wednesday in Hong Kong over controversial legislation that would make insulting China’s national anthem a criminal offense punishable by up to three years in jail.

Plans to “besiege” the city’s legislative complex as the city’s lawmakers met to give the National Anthem Bill its second reading on Wednesday morning didn’t materialize, but protests broke out around lunchtime in several districts.

In the Causeway Bay commercial and shopping district, groups gathered to chant protest slogans in an upscale shopping mall. Police appeared to be conducting mass arrests in the area.

Riot police fired pepper spray balls at crowds gathered in the Central business district, chanting slogans like: “Fight for freedom, stand with Hong Kong.” The area is home to the headquarters of several international banks and law firms.

Late in the afternoon, protesters gathered in the Mong Kok area for an impromptu march, before they were dispersed by police.

Approximately 300 people were arrested on Wednesday, according to local media.

The protests come just days after thousands took to the streets on Sunday to rally against national security legislation proposed by Beijing. The national security law targets secession, sedition, terrorism and foreign interference in Hong Kong—but it would be imposed by the government in Beijing, bypassing Hong Kong’s legislative process. Critics say the law will be used to silence those who oppose Beijing, though Hong Kong’s leader had dismissed concerns and said it will not encroach on Hong Kong’s freedoms.

Here’s what to know about the contentious national anthem bill.

The proposed legislation would criminalize insulting or misusing “March of the Volunteers,” China’s national anthem.

Playing or singing the national anthem in a “distorted or disrespectful way” or “publicly and intentionally” insulting it would be punishable with a fine of 50,000 Hong Kong dollars (approximately $6,450) and up to three years in jail.

The bill also stipulates that the anthem can’t be used as background music in public. It should be played in schools to educate Hong Kong students on “the history and spirit of the national anthem,” the text of the proposed legislation reads.

It was first introduced into Hong Kong’s legislature in early 2019, but it failed to progress after a proposed extradition bill sparked mass demonstrations and plunged the city into six months of often violent anti-government protests.

Why is the bill sparking protests?

The bill is seen as an encroachment by Beijing on Hong Kong’s unique freedoms, like freedom of speech.

“It is a restriction on personal liberties, freedom of expression,” Au Nok-hin, who served as a legislator from 2018 to 2019, tells TIME.

Past moves by Chinese authorities perceived to be quashing freedoms have sparked huge demonstrations in Hong Kong. Thousands of protesters turned out on Sunday to march against a national security law, which China’s top lawmaking body announced last week it plans to implement for Hong Kong.

Maya Wang, a China senior researcher at the rights group Human Rights Watch says the national anthem bill would be a “grim development” for Hong Kong.

“Looking at this law and the upcoming national security legislation, there is an unmistakable trend towards the end of Hong Kong as a place where people can speak without fear,” she says. “It is a step towards greater and more comprehensive restrictions on freedom of expression that tracks with the trend overall in the rest of mainland China.”

How are Hongkongers Reacting?

“The hallmark of an authoritarian regime is that they will criminalize all conduct which they don’t like,” says pro-democracy lawmaker Dennis Kwok.

“Respect of the people should be earned instead of being stipulated by punishment,” Fernando Cheung, a pro-democracy lawmaker, tells TIME. “Beijing has failed to earn the respect from Hongkongers in the past 23 years and it’s now ready clamp down on us to make Hong Kong become an ordinary city of the mainland.”

Why does Beijing want to pass it now?

The city’s embattled Chief Executive Carrie Lam in early May asked the legislature to make the bill the top priority (several proposed laws have been backlogged by a months-long standoff between opposing political blocs). The bill will expire and have to go through the entire legislative process again if it isn’t passed by the legislator’s summer recess in July, according to local media.

Experts say Beijing has grown impatient with Hong Kong, and wants to push through a raft of changes, including the national security law and the national anthem law now, to combat the city’s democracy movement.

“Last year they were shocked by the ferocious protests, one million people, two million people and so forth, so they wanted to act fast,” Willy Lam, an adjunct professor at the Chinese University of Hong Kong’s Center for China Studies, tells TIME.

Other reforms appear to be under consideration too. In early May, the city’s leader criticized the education system, saying that the government would announce plans this year to address perceived problems within it. “Liberal studies” courses that are part of Hong Kong’s curriculum have been blamed for encouraging students to join protests.

The bill could become law as early as June 4, according to the South China Morning Post.

“We as a minority in the legislature can do very little,” says pro-democracy lawmaker Fernando Cheung.

“My expectation is that under the iron first policy of the Communist Party, the national anthem law has a very high probability of being passed,” says former legislator Au Nok-hin. “But it will never get public support.”

Rights observers say that Beijing’s walk back on promises made at the time of the former British colony’s handover to China in 1997 should be taken as a warning by the international community.

“Hong Kong is kind of like the canary in the coal mine for China’s increasingly aggressive behavior for breaching international commitments,” Wang of Human Rights Watch says. 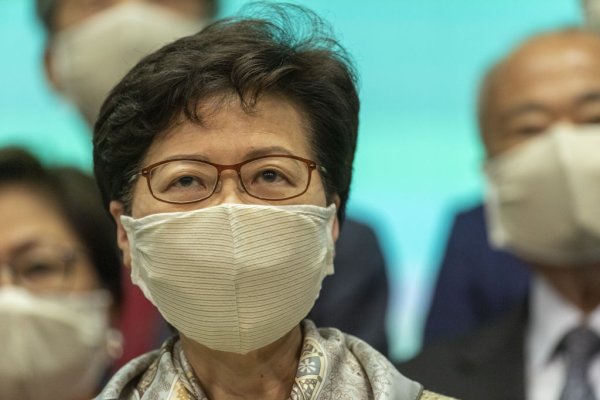