Massive protests shut down the streets around Hong Kong’s government offices Sunday to demand that the city’s leader step down, and a controversial extradition bill be withdrawn, a day after the government suspended the measure in response to snowballing unrest.

The size of the demonstration — organizers estimate some 2 million people attended, making it likely the largest in living memory — forced the city’s top official, Chief Executive Carrie Lam, to issue an apology.

“The Chief Executive acknowledges that her government work has been unsatisfactory, leading to confusion and conflict in society, and leading to disappointment and heartbreak,” read an official statement issued in Chinese.

“The Chief Executive would like to apologize to the city’s citizens and is open to receiving criticism [on how to] further improve and provide better services for the broader society.”

Neither the apology nor the debacle over the bill will mollify her opponents. Jimmy Sham, convenor of protest organizer the Civil Human Rights Front (CHRF), told reporters Sunday morning that demonstrators would not step down until the bill was dropped entirely.

Lawmaker Lee Cheuk-yan said that demonstrators were also demanding that Lam take back her characterization of the bill’s opponents as rioters.

A minute’s silence was meanwhile held Sunday for a 35-year-old man, who plunged to his death from scaffolding on the side of a shopping mall late Saturday after unfurling a banner denouncing the extradition legislation. The man’s surname was given by local media as Leung. During his hours-long standoff with police negotiators he wore a raincoat on which were scrawled the words, “Carrie Lam is killing Hong Kong.”

Protesters hailed him as a “martyr” on social media and many on Sunday carried white flowers to commemorate him. Well-wishers formed long queues, more than a kilometer long, to leave floral tributes outside the Pacific Place mall, where floral bouquets and origami tributes were piled high and memorial services were held. “I hope these words will help carry him into the next life,” said a 75-year-old woman named Luk, who was reading Buddhist prayers aloud.

A 22-year-old music student from Hong Kong University named Shing played a bamboo flute as the crowd fell silent and some sobbed. “Carrie Lam is a murderer,” he said afterward.

Near to where the spot where Leung had fallen to his death, a man put up a sign denouncing Lam as a “murderer Chief Executive” to cheers from passing protesters.

“I’m wearing a white flower to mourn the death of the protester at Pacific Place yesterday and also because I want to show my anger and frustration over the government refusing to listen to our voice” said 16-year-old student Vincent Leung. He said he and his friends were on strike from school and would continue striking until the extradition bill was scrapped. “The Hong Kong government and police are destroying the city,” he said. “We cannot stay silent.”

“The government has not really listened to the people, our voice has not been heard,” said bank worker Dickson Tsui, 30, who was waiting to place a bouquet on the pavement outside Pacific Place.

“I feel so sad about our government. Someone had to die to tell the government how Hongkongers feel,” added 13-year-old student Yolanda Lam.

Makeshift memorials to Leung were also set up outside Hong Kong’s legislature, where activists handed out voter registration forms. Pro-Beijing politicians are fearful that voters will punish them in forthcoming municipal elections for their support of the extradition bill.

A political crisis has spiraled over the last week into a showdown between the semi-autonomous city’s administration and its pro-democracy movement, which fears an erosion of freedoms under an ever-encroaching China.

Mass demonstrations in recent days have galvanized a broad cross-section of society, infuriated by a proposal to amend laws to allow suspects, for the first time, to be transferred to the mainland for trial. The government says the amendments are necessary to keep Hong Kong from becoming a haven for fugitives, but critics of the proposed legislation say Beijing will use it to apprehend political opponents and dissidents.

Read More: Hong Kong Was My Refuge, Now Its Freedom Is at Stake

The city’s subway stations were packed Sunday with black-clad demonstrators heading to Victoria Park, the traditional staging ground for protests. One subway station near the park was so overcrowded it had to be shut down. At other stations, protesters were waved through the turnstiles without having to pay, and escalators were switched off, to accommodate the massive numbers.

Huge crowds gathered in Victoria Park from 2:30 p.m. and marched from there on the Central Government Offices (CGO) in the Admiralty neighborhood three kilometers away, with the head of the march reaching Admiralty just before 5:00 p.m. The district is also home to the headquarters of the People Liberation’s Army and the legislature. Many marchers chanted the hymn “Sing Hallelujah to the Lord,” which has been adopted as the unofficial anthem of the protests.

The tail of the march did not leave Victoria Park until around 6:30 p.m., local media said.

At subway exits, demonstrators handed out signs that read “The students didn’t riot” and demanded that police be held to account for what they saw as a heavy-handed response to earlier demonstrations. Many protesters carried umbrellas—not only as protection from Sunday’s scorching sun but as shields against police pepper spray and symbols of the 2014 Umbrella Revolution.

One group of protesters carried a banner that read “A tiny spark can burn a whole field.” Others held banners that repeated the words on the dead man’s raincoat: “Carrie Lam is killing Hong Kong.” Some held photos of an injured schoolteacher they say was shot by police rubber bullets on Wednesday.

As marchers reached the Central Government Offices, a large banner reading “You can’t silence us” was unfurled from a footbridge over the procession. There were massed chants of “Withdraw! Withdraw!” from the crowd. By 8:00 p.m. the roads around the government headquarters and legislature were completely occupied.

Pat Lee, 44, a stay at home mom, said that if the extradition bill passes “There will be no future for Hong Kong. It would utterly change the city.”

Marchers were scathing of Beijing’s insinuation the protests were the result of foreign meddling. “As long as we do something against the Beijing agenda, they’re going to say it is foreign influence,” said a protester, who identified herself as Ms. Lee and said she worked in finance. “As if other countries can push a million people out on the streets like this.”

The Associated Press reported that demonstrators had briefly unfurled a large banner Sunday reading “Fight for Hong Kong” from the summit of Lion Rock—a distinctively shaped, 495-meter hill on the Kowloon peninsula that is symbolic of the city.

Meanwhile, one of the Hong Kong’s top news outlets, Apple Daily, said Sunday morning that it had been hit by a Distributed Denial of Service (DDoS) attack. The news comes two days after messaging service Telegram, which is heavily used by Hong Kong protesters, reported a powerful DDoS attack that it said largely originated from within China.

For generations of Hongkongers, who view themselves as culturally distinct from mainland Chinese, the extradition bill is a serious threat to the city’s cherished freedoms. They are facing off against a Beijing-backed leader who does not want to be seen bowing to democratic opposition, and who is supported by an authoritarian superpower that has crushed all forms of dissent at home with widespread censorship, internment of religious minorities in concentration camps, and the arbitrary detention of political activists, journalists and lawyers.

Read More: Hong Kong Is on the Frontlines of a Global Battle for Freedom

The breadth of opposition to the bill is remarkable. The business community, the legal sector and foreign governments have all spoken out against it. Even sex shops have voiced their support for Hong Kong autonomy. Teenage students, professionals, and families alike turned out for a march exactly a week ago, where protesters similarly called for the scrapping of the bill and Lam’s resignation as they choked the city’s main streets.

Organizers claimed over a million people were in attendance at the earlier march—a huge turnout in a city of seven million—but many participants said Sunday’s march appeared even bigger, citing the greater number of impromptu road closures needed to accommodate spillovers from the main protest.

Earlier in the week, a protest outside the city’s legislature forced the postponement of discussion of the bill. The protests turned violent, with the police deploying tear gas and rubber bullets to disperse the crowds. Eighty-one people were injured in the clashes.

Rallies in support of the Hong Kong protests have been held as far afield as Sydney and Northern California. Hundreds also demonstrated in Taipei Sunday in solidarity with Hong Kong.

The city’s protesters have vowed to continue their campaign until their demands are met. “The first protest did not achieve what it set out to do,” said Anne Liu, 51. “So people will of course come out this second time and a third, fourth, and fifth time, or however long it takes to get this bill withdrawn.” 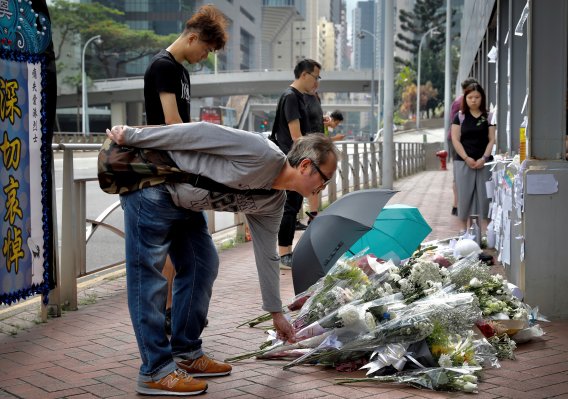 Dead Anti-Extradition Protester Hailed as Martyr in Hong Kong
Next Up: Editor's Pick