'He's Walking the Tightrope.' How Donald Trump Is Getting Out His Message on Coronavirus

Most evenings for more than a month, Americans across the country tuned in to watch President Donald Trump give his regular coronavirus briefing. Trump typically spends more than an hour standing behind the podium in the White House briefing room or the Rose Garden, praising his Administration’s response to the pandemic, highlighting the news of the day and sparring with reporters. And he’s plainly thrilled with the viewership he’s bringing in.

“I think the American public — ultimately, they should be the decider,” Trump said at a briefing on a balmy spring evening on March 29 in the Rose Garden, when asked whether networks should carry his remarks live. He went on to mention a recent New York Times story that reported the briefings drew an average of 8.5 million viewers on cable news, with at least one drawing more than 12 million. “Even they said that the ratings are like Monday Night Football ratings,” he noted.

But for a President who relishes standing in front of thousands of supporters packed into arenas to see him speak off the cuff, the power of those numbers can’t be overestimated. In some ways, Trump’s coronavirus briefings have become his new rallies. His public leadership during the pandemic and ability to draw millions of viewers every night have become a crucial opportunity for him and his campaign to reach Americans as he faces widespread criticism for his government’s handling of the crisis and a dramatic economic downturn that could pose a major threat to his re-election in November.

There’s some evidence that the American public is responding. A Gallup poll from late March found Trump’s approval rating at 49%— on par with the highest of his presidency and up five points from the previous poll— and 60% of Americans said they approve of Trump’s handling of the coronavirus pandemic.

Some experts say that’s because Trump has found the right balance between the competing demands of the public health crisis and a spiraling economy. “I thought that the combination of the pandemic and the health collapse and the economic collapse of the country would deny [Trump] reelection,” says Republican pollster Frank Luntz. “Over the last 10 days, I’ve watched him thread that needle between economic concern over the long term and health concern in the short term,” he says. “It’s why his job approval numbers are up, his handling of the coronavirus is up, and [voters] are not blaming him for the economy.”

But it’s a delicate balance to maintain, especially as the death toll in the nation continues to dramatically rise and the economy continues to flounder. With weeks to go before the predicted peak of the spread and no strong evidence yet that the United States has successfully begun to flatten the curve of the virus’s growth, it’s a political risk for Trump to continue to own the response. The election is still eight months away, and the United States has yet to see the worst of the crisis. “He’s walking the tightrope, but so far so good,” says Luntz. “He is also capable of falling off that tightrope at any moment.”

The coronavirus task force briefings at the White House have become Trump’s primary vehicle for getting his message out to Americans each day. He’s used them to announce national guidelines on social distancing, to say he would use the Defense Production Act to marshal the private sector to manufacture supplies, to position himself as a “wartime president,” and to respond to widespread criticisms that his Administration was woefully unprepared to fight the virus and fumbled its initial response on testing and other measures.

With Trump’s own travel restricted for safety measures and an inability to hold large gatherings throughout the country, spending often more than an hour at the microphone most days has become the president’s most direct, unfiltered way to communicate with Americans in lieu of the sprawling campaign rallies he can no longer hold. That doesn’t sit well with everyone. Washington Post media columnist Margaret Sullivan has called on networks to stop carrying the briefings live. “They have become a daily stage for Trump to play his greatest hits to captive audience members,” she wrote.

Trump holds the briefings with key members of his coronavirus task force onstage with him, including trusted health experts Dr. Anthony Fauci and Dr. Deborah Birx, who Trump has said have become “stars” during this crisis. Their constant presence makes the briefings an even more compelling tool of communication, observers say. “He’s got two very credible health experts standing up there, and they’re carrying the burden of communicating from the public health community,” says Kathleen Hall Jamieson, director of Annenberg Public Policy Center at University of Pennsylvania and an expert in political communication. She says that has a “halo effect” on the President: “Donald Trump is getting the benefit of having them there.”

The task force briefings aren’t the only way Trump is sending powerful messages about his actions on stemming the coronavirus pandemic to the American public, Jamieson says. Americans received a note in the mail last week outlining the national social distancing guidelines put in place on March 16: On one side, the card announces these are “President Trump’s Coronavirus Guidelines for America,” and on the other, the guidelines are listed. The mailers were sent starting March 21 to every residential location across the United States, including P.O. boxes— or 130 million pieces in all, a spokesperson for the United States Postal Service told TIME.

“One side of this is a federally funded campaign ad for Donald Trump,” says Jamieson. “The other side is extraordinarily useful information being sent to us by the CDC.” The White House confirmed to TIME that the cards were sent jointly by the White House and the Centers for Disease Control and Prevention (CDC); a spokesperson for the CDC said the content of the mailers was created in consultation between CDC, the National Institutes of Health (NIH) and Dr. Birx through the White House task force.

“People picked up this postcard today and saw, ‘President Trump sent me something to protect me,’” Jamieson says. “The most effective persuasion is persuasion that doesn’t look like persuasion.”

While Trump gets his own message out directly from the White House, his 2020 campaign staff has readjusted with social distancing measures and is working to amplify the strategies they see reflected in his approval ratings. “Support for President Trump and his bold leadership is at an all-time high and we are working every day to ensure he has four more years to Keep America Great,” says Ali Pardo, deputy communications director for the campaign. Pardo says they are linking campaign calls with coronavirus education to voters while following the social distancing guidelines. According to Pardo, on March 21 alone, Trump campaign volunteers made nearly 1.5 million phone calls from their own homes. “On these calls we are not only encouraging people to re-elect the President, but we are asking people to visit coronavirus.gov for important resources and to learn about what they can do to flatten the curve,” Pardo says.

The worst is yet to come for the United States in this crisis, and it’s impossible to say how voters will feel about the Commander-in-Chief in November. More than 2,000 people infected with COVID-19 have already died in the U.S., and Trump, Fauci and Birx said at the briefing on March 29 that they had modeling showing that even with social distancing measures in place, the U.S. could see 100,000 or more deaths from the coronavirus, and millions of cases.

That’s still a big “if,” and a significant amount of pain for Americans to process even if it does happen. Many voters are sure to blame the Administration for the chaos that has defined much of the government’s early response; strategists hope people more will ultimately focus on what the Administration got right. “I think the best thing you can do, and I think he’s doing it right now, is doing his job,” says Matt Beynon, a former communications adviser to Rick Santorum’s presidential campaigns. “If his Administration is able to minimize the damage and minimize what could have happened, I think that’s something that voters would reward.” 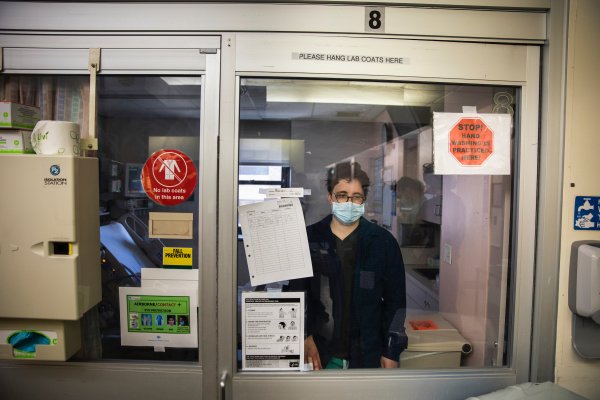 Doctor Recovering From COVID-19: We Feel Dispensable
Next Up: Editor's Pick