President Donald Trump speaks during press briefing with the Coronavirus Task Force, at the White House, on March 18, 2020, in Washington.
Evan Vucci—AP
By W.J. Hennigan

A growing chorus of politicians, medical professionals and hospital officials are pleading with the president to ease the deepening crisis by using his authorities under the Defense Production Act (DPA) to mobilize U.S. private production capacity to manufacture the supplies. Trump did initially invoke the act a week ago, but he has yet to harness the act’s powers to its fullest extent: nationalizing production lines to crank out mechanical ventilators and other medical equipment. “The Defense Production Act is in full force, but haven’t had to use it because no one has said NO! Millions of masks coming as back up to States,” he said Tuesday in a Twitter post.

Instead, Trump’s strategy is to persuade the private sector to do more. It’s part of the job that he has come to enjoy, playing businessman for the American people. He has involved big name corporations in his Administration’s response to the COVID-19 pandemic from the start, bringing in executives to assist in the effort, which has thus far achieved limited results. But the president’s unyielding drive to play dealmaker, even in the case of a pandemic, could be the deciding factor in whether states can get supplies into the hands of its medical professionals, according to governors, mayors, lawmakers, doctors and nurses.

Even the best hospitals could run out of personal protective equipment and ventilators. In anticipation of the looming disaster, governors from the hardest-hit states say they’re locked into counter-productive bidding wars with one another to acquire the supplies from distributors. The CDC has advised doctors and nurses to use household items like scarves and bandanas as protective measures, if necessary. And a grassroots mobilization is underway inside small T-shirt factories, kitchens, basements and garages across the country to produce makeshift protective gear for medical professionals.

Time is running out. The American Hospital Association, American Medical Association and American Nurses Association jointly wrote a letter to Trump that described the pressing need for supplies. “America’s hospitals, health systems, physicians and nurses urge you to immediately use the DPA to increase the domestic production of medical supplies and equipment that hospitals, health systems, physicians, nurses and all frontline providers so desperately need,” it said.

New York Governor Andrew Cuomo has requested 30,000 ventilators in anticipation of the coming crush of severely ill patients in emergency rooms. The state is now the epicenter of the COVID-19 outbreak in the U.S. with more than 25,000 cases—and the rate of new infections is doubling every three days, Cuomo told reporters Tuesday. Asking businesses to for voluntary commitments is too risky of a strategy, he said, especially if human lives are at stake. “Volunteerism is nice. It is a beautiful thing,” he said. “That is not going to get us there, and I do not for the life of me understand the reluctance to use the federal Defense Production Act.”

“Only the federal government has that power and not to exercise that power is inexplicable to me,” Cuomo said.

Without Washington at the controls, the free market is working against the states, Cuomo said: “Masks that we paid 85 cents for, we’re now paying $7.” He’s not alone. The same criticism has been levied by Illinois Governor J.B. Pritzker and Massachusetts Governor Charlie Baker, who say suppliers are taking advantage of states as they vie for the same equipment.

Mike Schiller, senior director of supply chain for the Association for Health Care Resource & Materials Management, says a big factor in the shortage is that many of materials come from China, which saw its production capacity ravaged when COVID-19 first broke out there in December. “It’s also important to remember that there is a global demand for these supplies. It’s not just a U.S. need,” he says. “The Defense Production Act has been authorized, but I don’t know that we’re taking full advantage of it.”

Initially signed into law by President Harry Truman in 1950 in response to the Korean War, the DPA is historically based on the War Powers Acts of World War II. Its sweeping authorities allow the president to demand businesses and corporations to prioritize and accept government contracts for materials during natural disasters, terrorist attacks and other national emergencies. The president can incentivize the U.S. industrial base to produce the needed goods through loans and high-dollar contracts. During World War II, cities like Detroit became known as the “Arsenal of Democracy,” after automakers transformed their manufacturing plants to assemble warplanes, tanks and other heavy equipment.

While the DPA is primarily associated with nationalizing parts of the economy for national defense, it has been invoked for a range of emergencies in recent years, including restoring power and distributing food and water in Puerto Rico in 2017 after Hurricane Maria. Presidents have felt most comfortable using the DPA in that limited role, says Jerry McGinn, who oversaw DPA programs in the Pentagon’s Office of Manufacturing and Industrial Base Policy. “The provision to control the distribution of materials in specific industries has always been controversial and rarely invoked,” he says. “Having the government nationalize an industry won’t necessarily solve the problem.”

Perhaps unsurprisingly, the business community has not warmed to the idea of being forced to manufacture products and prioritize government contracts. After Trump invoked the Act, the U.S. Chamber of Commerce said in a statement that the DPA “isn’t a magic wand to immediately solving medical supply shortages,” and won’t result in producing “highly specialized manufacturing equipment overnight.”

Trump, a career businessman who often preaches about the perils of socialism, is receptive to that argument. Invoking the DPA, he admitted Sunday, sent “tremors through” the corporate community. “We’re a country not based on nationalizing our business,” Trump said. “Call a person over in Venezuela, ask them how did nationalization of their businesses work out. Not too well. The concept of nationalizing our business is not a good concept.”

Trump is convinced that the best way to meet demand for equipment is by cajoling automakers, medical device manufacturers and other industrial firms for voluntary commitments. In some cases, it’s worked remarkably well. After Vice President Mike Pence made a high profile visit to 3M, a manufacturer of respirator masks, the firm said it will nearly double production to an annual rate of 2 billion masks worldwide. Honeywell also committed to boosting its capacity to make masks. Pence said Tuesday that tech giant Apple was planning to donate 9 million of its masks.

However, attempts to broaden that effort are less conclusive—at least in the near-term—as the number of cases across the country climbs. General Motors “is exploring the feasibility to build ventilators” at an Indiana facility by partnering with Ventec Life Systems. Ford said it would “lend its manufacturing and engineering expertise” by joining forces with companies like 3M and GE Healthcare to produce medical supplies, such as face-shields and respirator masks. Hanes will also begin making FDA-approved face masks, but not the medical grade N-95 masks that are most in-demand.

Nevertheless, the White House believes its strategy will meet hospitals’ fast-growing demand. “We’re getting what we need without putting the heavy hand of government down,” White House adviser Peter Navarro told reporters Sunday, claiming the Administration’s actions have resulted in “the greatest mobilization in the industrial base since World War II.”

He provided two examples in how the Administration’s strategy of private-sector volunteerism compares the most notable civilian-military partnership in American history: French company Pernod Ricard, which has retooled its American facilities from producing alcoholic beverages to hand sanitizers and Honeywell, which has promised to open another mask-making production line within 30 days.

Navarro, who counsels Trump on trade matters, has a staff of 10 on the first floor of the Executive Office Building across an alley from the West Wing of the White House. He is now spearheading—along with Larry Kudlow, the director of National Economic Council, and Rear Adm. John Polowczyk, who recently came over from the Pentagon where he led military logistics for the Joint Chiefs of Staff—the effort to persuade businesses into joining the pandemic response. The team is now trying to figure out how best to help the medical manufacturing industry, which is globally connected and complex. They are also coming to find that it’s difficult to track the constellations of suppliers and distributors widely disbursed around the world.

They are running short on time to catch up. “Nobody has one sight picture for that supply chain,” Polowczyk told reporters Monday. “We have a team of people that are searching the globe for personal protective equipment, figuring out where it is, figuring out if we need to buy it or just transport it and get it here faster.” 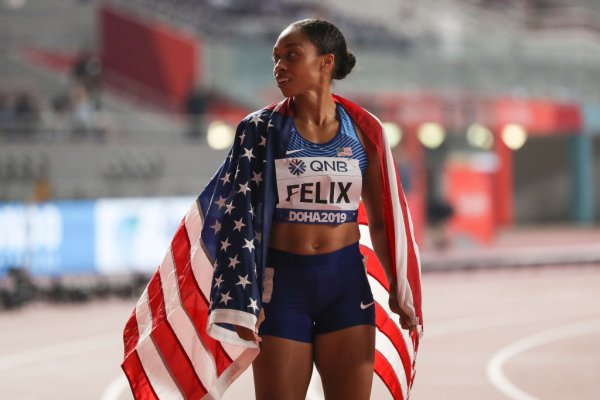 Allyson Felix: Olympics Delay Causes Fear and Uncertainty. But Here's Why I Won't Lose Hope
Next Up: Editor's Pick