'Our Big War.' As Coronavirus Spreads, Trump Refashions Himself as a Wartime President

The fight to slow the spread of COVID-19 is “our big war,” Trump said Thursday. “It’s a medical war. We have to win this war. It’s very important.”

As the coronavirus grinds much of American life to a halt, Trump is increasingly casting himself as a wartime President facing a foreign enemy. At the podium in the White House press briefing room on Thursday, he trained his fire not only on the virus, but also on China, where the outbreak first emerged.

“We continue our relentless effort to defeat the Chinese virus,” Trump said. (A picture of his prepared remarks showed “corona” crossed out and replaced with “Chinese.”) The day before, standing in the same spot, Trump used the phrase “our war against the Chinese virus” while describing the government’s efforts.

“I view it as a, in a sense, a wartime President,” Trump said on Wednesday. “We had the best economy we’ve ever had. And then, one day, you have to close it down in order to defeat this enemy.”

Trump’s rhetorical shift to saying the country is at war reflects a strategy to blunt criticism and push blame onto a foreign power. By positioning the virus as an enemy, Trump can go on the attack at a moment when he’s on the defensive about the sluggish government response to the virus so far. And by assigning blame to a foreign menace, Trump is attempting to justify why the tanking economy isn’t his fault after spending much of his presidency crowing about and tying his own reelection bid to a booming economy.

“He realized if he’s painted in 2020 as a recession President who had a Herbert Hoover-like impulse to not act, then he was due to not be re-elected,” says Douglas Brinkley, an expert in U.S. political history at Rice University, referring to the President who was in office during the stock market crash of 1929 and was blamed for not reacting forcefully enough to stem the impact.

Instead, Brinkley says, “he’s trying to be FDR”— Franklin Delano Roosevelt, the President who led the nation out of the Great Depression and through World War II.

The wartime rhetoric doesn’t match the Administration’s initial posture toward the virus. Top health officials first warned Trump about the outbreak in China in mid-January, yet the President spent weeks downplaying the seriousness of the threat, urging Americans not to panic rather than telling them to adjust their behavior. His aides have tried to depict that as a conscious decision to try to keep the nation calm. But Trump’s actions left the U.S. unprepared for a mushrooming health crisis.

Multiple senior Administration officials tell TIME that a key turning point in Trump’s approach to the outbreak came last week, on the day he decided to impose travel restrictions on Europe. Trump spent multiple hours on Wednesday, March 11 huddled at the White House with some of his top advisers on the coronavirus outbreak, including Secretary of Health and Human Services Alex Azar; Assistant Secretary for Preparedness and Response Robert Kadlec; Dr. Anthony Fauci, Director of the National Institute of Allergy and Infectious Diseases; Director of the Centers for Disease Control and Prevention Dr. Robert Redfield; and Dr. Deborah Birx, who had been brought in to help manage the government’s response to the virus.

The officials walked into the Oval Office armed with data. The spread of COVID-19 was severe but tapering off in Asia, they said. Europe was becoming the new epicenter of the pandemic. The officials told Trump that they had reason to believe European travel had seeded outbreaks in Westchester County, N.Y. and in Florida. They suggested the U.S. block travelers from the Continent, according to a senior Administration official familiar with the decision.

Up to that point, Trump had resisted taking broader steps beyond blocking foreign travelers who had recently visited Italy, South Korea and China. But after seeing the new projections, he changed course. “If that’s what you guys say, I’ll do it,” Trump said in the Oval Office, according to an official in the room. “It sucks, but we’re going to pay the price now so we don’t have to pay it later.”

Convinced that shutting down European travel would make him look decisive and calm financial markets, Trump said he would deliver the news that night. Aides scrambled to draft a brief address and called television networks to break into primetime programming at 9 p.m. After delivering the address, Trump walked with Azar back to his private study.

But the speech was laced with misstatements and failed to ease the market panic. The following days brought even more alarming news. The models of possible infection rates inside the U.S. were looking worse by Friday, March 13, informing Trump’s decision to declare a national emergency. Three days later, on Monday, March 16, he announced a series of stringent national guidelines for the next 15 days, including urging Americans to limit social gatherings to 10 people or fewer and to avoid discretionary travel. That day marked the first time Trump asked Americans to keep their distance from each other and slow down their economic activity to try to avoid a spike in lethal cases of the virus that would swamp the American medical system.

A White House official concedes that those decisions were made much later than they could have been. “The problem is, if you are waiting for the data before you make these key decisions, you are actually two to three weeks late because you need an incubation period for the virus,” the official says. “You need for the thing to manifest itself and for people to test it, which takes time.”

“The President does deserve credit for the China ban early on. The problem was, that bought us a month,” the official says. “And that month should have been much better spent.”

As Trump’s response to the crisis has ratcheted up, he has became more explicit about framing the fight against the virus as a war. When he invoked the Defense Production Act on March 18 to make military resources available, he referenced the country’s mass mobilization and shared sacrifice during World War II.

“To this day, nobody has seen anything like what they were able to do during World War II,” Trump said. “Now it’s our time. We must sacrifice together because we are all in this together and we’ll come through together.”

Trump has another battle on his hands, of course: an election in November. Winning it may require making the transition from the divisive rhetorical style that energizes his supporters to speaking to an entire country reeling from the economic fallout wrought by the virus, says Martha Kumar, a political science professor at Towson University who studies the presidency.

“Wartime presidents — the advantage they have is they No. 1, get public attention, and then there is a sense of unity when people believe they are in a wartime situation and they are willing to be supportive or at least not critical of a President,” says Kumar. “But it’s a risk, too, because you have to show you’re winning that war.” 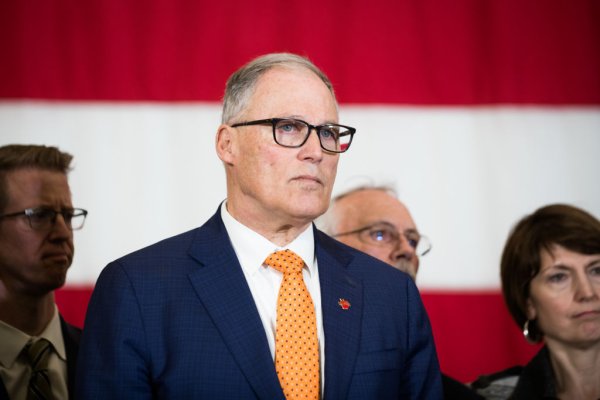 Jay Inslee Urges the Trump Administration to Treat the Coronavirus Response Like a War
Next Up: Editor's Pick