The entertainment industry essentially ground to a halt in mid-March, as coronavirus swept the nation, rendering everything from concerts and movie theaters to publicity events and film shoots unsafe, if not illegal. We have to take our distractions where we can get them in these anxious times, so I for one have never been more grateful for television, which will presumably continue to put shiny new stories in front of our faces until its arsenal of stockpiled programming runs out. Whether you’re an established TV fanatic or someone who’s been spending a lot more time with the tube now that there’s not much else to do for recreation, I humbly recommend these five standout new series from the past month—plus two honorable mentions in case you’re running through your to-watch list more quickly than usual. For more suggestions, you can find February’s edition here.

The Plot Against America (HBO)

It makes sense that argument is the primary mode of conversation in The Plot Against America, an incisive six-episode series adapted from the 2004 Philip Roth novel that imagines an alternate history in which legendary aviator and America First mouthpiece Charles Lindbergh defeats Franklin Delano Roosevelt in the 1940 election. At the center of this saga from The Wire and The Deuce creator David Simon and his frequent collaborator Ed Burns are the Levins, a working-class Jewish family in Newark, NJ. Occupying two floors of a shared house, insurance agent Herman (Homeland’s Morgan Spector) and his wife Bess (Zoe Kazan) preside over a clan that includes their two sons, artistic teen Sandy (Caleb Malis) and sensitive 10-year-old Philip (Azhy Robertson from Marriage Story); Herman’s orphaned, angry-young-man nephew Alvin (Anthony Boyle); and Evelyn (Winona Ryder), Bess’ older sister, whose life has been stymied by an obligation to care for their sick mother. Though they share blood, culture and heritage, each character reacts in a different way to Lindbergh’s ascent. And it’s their passionate debates, more than any sensational turn of events, that give the slow, deliberate show its resonance. [Read TIME’s full review.]

Desperate Housewives, The Stepford Wives, Douglas Sirk melodramas and just about every other pop-cultural depiction of the stultifying lives of women in suburbia are in the DNA of this strange and wonderful short-form series, which premieres March 29 on Adult Swim. But Debras, from Amy Poehler’s Paper Kite Productions, does more than remix homemaker tropes à la Weeds. Based on the avant-garde comedy creator-stars Sandy Honig, Mitra Jouhari and Alyssa Stonoha have been performing for years, the show is delightfully absurdist. The Debras wear stark white and deliver ridiculous lines (“A Debra must be ready to conceive at all times”) with mannered deliberateness. Sitcom clichés get stretched to extremes; Stonoha shoves a cop into a closet, exits wearing his uniform . . . and then he struts out in her character’s pantsuit. Ingenious sight gags abound, from a woman pruning a hedge with shaving cream and a razor to a board game called Security Questions. [Read the full review.]

From creator Lena Waithe comes this light yet smart, easy-to-binge comedy about three black women in their, yes, 20s trying to carve out careers in Hollywood. Marie (Christina Elmore of The Last Ship) is a studio executive whose on-paper success belies her frustration at the way she’s tokenized at work. In the wake of an acting career that peaked early, Nia (Gabrielle Graham) teaches yoga and halfheartedly dispenses wellness bromides. At center stage is Hattie, a suave, struggling would-be screenwriter whom we meet just as she’s being evicted from her apartment. Following the last decade’s explosion of comedies about female friends navigating early adulthood together, from Insecure to Broad City to Girls, it’s this protagonist—a 24-year-old lesbian dandy based on Waithe’s younger self and played by charming newcomer Jonica “Jojo” Gibbs—who makes the show unique. The assistant to a mercurial black, female super-producer whose output she finds mostly corny, Hattie is a mess of relatable post-adolescent contradictions: confident in her own talents but unable to get words on paper, prolific in her flirtations but hung up on the one woman who won’t commit. Her insistence on making space amid the current African-American entertainment boom for great art, as opposed to celebrating mere representation, makes both Hattie and Waithe vanguards of that renaissance’s nascent second wave.

Built on the quiet intensity of a masterly lead performance by Shira Haas (an accomplished young Israeli actor best known in the U.S. for appearing alongside Jessica Chastain in The Zookeeper’s Wife), Unorthodox traces the transformation her sheltered character, Esty Shapiro, undergoes after fleeing a Hasidic Jewish sect in Brooklyn. Loosely based on a 2012 memoir that Deborah Feldman published just a few years after the aspiring writer took her young son and left both her husband and their isolated Satmar community, the miniseries recasts its hero as a would-be musician. With the help of her secular piano teacher, she hops a plane to Berlin, where her mother, Leah (Alex Reid from Britain’s Misfits)—now disowned by her former neighbors—has been living for many years since she left Esty’s alcoholic father. [Read the full review.]

What becomes of the cool kids when they grow up and all the things they used to love have gone out of fashion? This is a question of existential importance to Vernon Subutex, the antihero of this fascinating French series adapted from an acclaimed trilogy of novels by the author and filmmaker Virginie Despentes (Baise-moi). In the ’90s, Vernon (Romain Duris, excellent) was the proprietor of Paris’ hippest record shop, Revolver, an unofficial clubhouse for the city’s music scene. His most impressive friend-slash-customer was Alex Bleach (Athaya Mokonzi), a gravelly voiced rocker who soon ascended to fame. A few decades later, however, record stores are obsolete, a middle-aged Vernon has lost his apartment as well as his business and Alex, who has long struggled with substance abuse, is staging a comeback. But before Vernon can ride his old friend’s coattails to financial security, Alex dies of an overdose—and Vernon, now homeless, finds himself in possession of his last interview tapes. His quest to put a roof over his head leads our protagonist into a series of encounters with former cohorts, from a cranky screenwriter sponging off his posh wife to a histrionic ex-girlfriend of Alex’s. Meanwhile, in a subplot that becomes one of the show’s greatest pleasures, an entertainment-industry operative known as the Hyena (Céline Sallette), whose specialty is ruining reputations, and the arguably straight producer (Flora Fischbach) with whom she’s infatuated are dispatched in search of the tapes by a mogul bent on adapting them into a docuseries.

Vernon Subutex is a surprisingly empathetic, sometimes-quite-funny show with a killer soundtrack that balances vivid storytelling, unique characters and sharp observations on nostalgia. Is it worth paying the $4.99/month fee for yet another streaming service (in this case, First Look Media’s relatively highbrow video channel Topic)? If you’re a fan of Despentes (or English-language authors like Kathy Acker and Nell Zink), love stories about music scenes, identify strongly with Gen X or just wish Hulu’s High Fidelity reboot were more realistic about the fate of record sellers in the 21st century, you owe it to yourself to at least sign up for the free trial.

Love thinking about fate, free will and whether we live in a computer simulation but frustrated with gimmicky takes on those heady topics by shows like Westworld and Black Mirror? This flawed yet compelling, gorgeously shot and beautifully acted meditation on those subjects from Annihilation and Ex Machina filmmaker Alex Garland takes a more straightforward approach to the intersection of tech and philosophy—and marks an auspicious start for FX’s new streaming hub. [Read the full review.]

Mae (creator Mae Martin), a self-deprecating Canadian comic living in London, falls for George (Charlotte Ritchie), an upper-crust English rose with a tight group of basic, spoiled, judgmental friends. The couple quickly moves in together, despite the fact that each is hiding something major from the other; while Mae is a recovering addict, George—who’s never dated a woman before—has yet to tell her friends she’s in a serious same-sex relationship. Short (just six half-hour episodes), sweet and funny, with Lisa Kudrow making delightful appearance as Mae’s mom, Feel Good does exactly what it says on the tin. 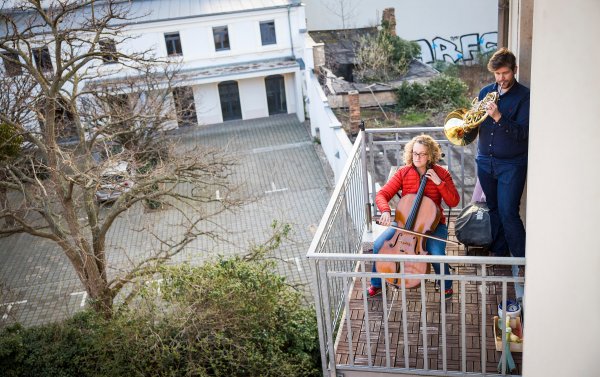 13 Things on the Internet to Lift Your Spirits
Next Up: Editor's Pick