There’s a breathtaking scene in the first episode of Netflix’s Unorthodox, where a young woman who has just fled a Hasidic Jewish sect in Brooklyn spends an afternoon at the beach with some new friends in Berlin. As if in one fluid motion, the other girls in the group tear off their clothes and sprint toward the water in bikinis, male companions in tow. At first, Esther Shaprio (Shira Haas), still dressed for ultra-Orthodox Williamsburg, can only look on in awe. As she watches them splash around, someone points out a villa across the water where Nazi leaders planned the Holocaust. “And you swim in this lake?” she demands. “The lake is just a lake,” he points out. Minutes later, scared but determined, she takes off her shoes, stockings and one of two long-sleeved shirts to wade in. Waist-deep, Esty finally removes her wig, lets it float away, grits her teeth, squeezes her eyes shut, dips her nearly bald head under the water, then emerges to float on its surface.

Out of context, this might look like a trite metaphor for personal liberation. Yet the scene operates on so many other levels as to become not only specific, but also legitimately profound. Half an hour into the riveting four-part series, filmed in Yiddish and English and due out on March 26, the baggage Esty brings to this adventure with her peers, all students at the local conservatory, is substantial. She comes across as somehow both older and younger than them; a 19-year-old wife on the run, casting off the modest clothing and stiff, brown wig that render her identical to Williamsburg neighbors three times her age, she’s just begun to exercise the bodily autonomy that these other women have always taken for granted. Esty’s fixation on a past atrocity, an obsession that the show perceptively frames as the defining trait of ultra-Orthodox Jewish culture, sharply contrasts with the students’ focus on the present. She isn’t just celebrating her newfound freedom—she’s rejecting a worldview that would, in its very conservatism, prevent her from moving forward in life.

Built on the quiet intensity of the lead performance by Haas, an accomplished young Israeli actor best known in the U.S. for appearing alongside Jessica Chastain in The Zookeeper’s Wife, it is Esty’s transformation that makes Unorthodox so absorbing. Loosely based on a 2012 memoir that Deborah Feldman published just a few years after the aspiring writer took her young son and left both her husband and Brooklyn’s isolated Satmar community, the miniseries recasts its hero as a would-be musician. With the help of her secular piano teacher, she hops a plane to Berlin, where her mother, Leah (Alex Reid from Britain’s Misfits)—now disowned by her former neighbors—has been living for many years since she left Esty’s alcoholic father. When Esty arrives at Leah’s address, however, she spots her mom with a female partner and decides not to approach her. Director Maria Schrader doesn’t clarify whether it’s the news about Leah’s sexuality or the realization that she’s built a happy new life without her daughter that bothers Esty. The ambiguity suggests that Esty doesn’t quite understand her reaction either.

On her own in a foreign city, she falls in with the conservatory crew, pins her hopes on an audition there and eventually gets a sense of what love and sex might be like outside of her miserable arranged marriage—all while trying desperately to hide the fact that she’s now homeless. In the meantime, along with flashbacks that slowly reveal the pain that led her to abandon her old life, Unorthodox follows Esty’s husband Yanky (Amit Rahav) in the immediate aftermath of her disappearance. Soon Yanky—a timid, awkward but well-meaning young man who would be described in his first language, Yiddish, as a nebbish—and his obnoxious older cousin Moische (The Little Drummer Girl’s Jeff Wilbusch, terrifying) are en route to Germany, on a mission to bring her home. Moische is a fascinating character, a frustrated, troubled man with a history in Berlin who bullies Yanky into hiding his telltale sidelocks under a baseball cap as soon as they arrive. “The Torah is different on the road,” he keeps saying.

The show’s plot is not always as convincing as its characters; the centrality of the conservatory to Esty’s storyline, in which it functions as a social hub, a source of hope and on one occasion an overnight shelter can feel especially contrived. Yet, thanks in large part to uniformly fine performances, creators Anna Winger and Alexa Karolinski render each character’s constantly shifting emotional states with rare precision. With Feldman’s book as a guide, their depiction of Hasidic Brooklyn resonates as both critical (echoing the harrowing 2017 Netflix documentary One of Us) and, in its comprehension of how historical tragedies made the community so insular and defensive, empathetic. Neither a simplistic feminist empowerment narrative nor a titillating glimpse into an often-exoticized culture, Winger and Karolinski make a compelling argument for the cruelty—and futility—of confining individuals to a stultifying, backwards-looking, one-size-fits-all existence. Unorthodox is a testament to the tough journey that awaits anyone who can’t abide the only world they know but lacks the tools to thrive outside its invisible gates. 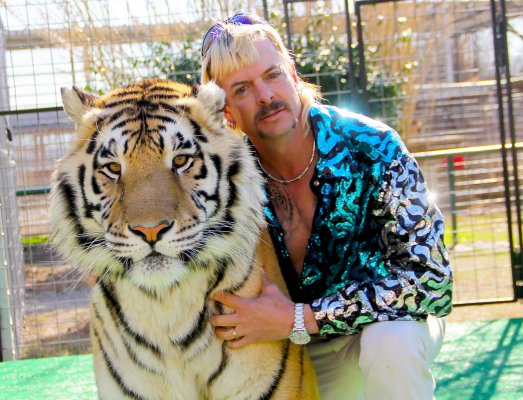 The Wild Story Behind the Netflix Docuseries 'Tiger King'
Next Up: Editor's Pick