In the course of an interview with the New York Times, Republican presidential candidate Donald Trump had his foreign policy boiled down to two words: “America First.” In an exchange prompted by the Times‘ David E. Sanger, who was the first to use the phrase in the course of the interview, Trump said that he was “not isolationist” but that he was, in fact, “America First.”

“I like the expression,” the candidate said. “I’m ‘America First.'”

Trump explained that what he meant by the idea was that his administration would prevent other nations from taking advantage of the United States. But whatever he meant, those words come with nearly a century’s worth of political baggage.

Though the nation has a long history of vowing to stay out of the problems of other countries—George Washington’s farewell address famously warned against foreign entanglements in 1796—but it was after World War I, as the U.S. was in a position of power and wealth compared to its once-stronger allies, that the modern version of that sentiment came to the forefront. At the war’s close, President Wilson had urged the nation to join the new League of Nations, to ensure peace through international cooperation in the precursor to the United Nations. In 1919, however, the Senate had rejected the idea of participating in such an organization.

In the years that followed, it appeared to some that the isolationist instinct in the U.S. had been a good one. As Europe faltered and once-supreme nations struggled to recover, the U.S. seemed by contrast healthy and wealthy—a fact that at least some observers attributed to having left the rest of the world to fend for itself. “The United States has achieved prosperity by the wise policy of America first,” declared London’s Daily Express in 1923. In 1927, the slogan got another boost when Chicago elected a headline-hungry mayor, William Hale Thompson, whose campaign anthem was “America First, Last and Always.” He pledged to support the establishment of America First Associations around the country, and said he would show English leaders who asked for economic help “where to get off.”

That “America First” attitude would be put to the test soon enough.

As war broke out once again in the 1930s, isolation-minded Americans confronted the possibility that the U.S. would become entangled in another international campaign. As TIME recounted in December of 1940, the previous summer a Yale law student named Robert Douglas Stuart Jr. had joined forces with business executive and famed veteran Gen. Robert E. Wood, and together they had started the America First Committee. The committee espoused the view that since Germany was unlikely to invade the U.S. directly, the best response to the war was for the U.S. to remain neutral in all respects, even if that meant doing business with the Nazis. By that December, the committee boasted 60,000 members.

In April of 1941, after the Lend-Lease Act was passed over America First objections, Charles Lindbergh—the most famous face of U.S. isolationism and the America First Committee—spoke to a Manhattan rally, laying out the America First take on the global situation. As he saw it, England was losing the war and it was too late to fix that. He believed the U.S. shouldn’t fight a war it couldn’t win, helping England was depleting America’s defenses, and the U.S. was better off alone:

As Donald Trump has done, Lindbergh advanced the idea that the majority of Americans were on his side, but that their opinions were drowned out by the powerful voices of the interventionist press. Poll results from the time, however, indicated that most respondents agreed that the U.S. should go to war if that were what was necessary to defeat fascism. And as the summer ended and it was clear that the committee had failed in its mission to change the tide, Lindbergh’s views were widely protested as un-American—and worse.

That autumn, the America First Committee, as TIME put it in a cover story, “touched the pitch of anti-Semitism, and its fingers were tarred.” The story came after Lindbergh publicly revealed his views about Jewish people, whom he faulted for pushing the U.S. toward war and for manipulating the narrative through what he saw as their control of the media. As “America First” became associated with those views—despite its protestations that it was not an anti-Semitic group and that it was looking out for the interests of American Jews—more moderate isolationists dropped out of the committee.

With fewer tactics left at its disposal, America First asked President Roosevelt to submit to Congress a declaration of war, for an up or down vote. The gambit never had a chance to pan out. The attack on Pearl Harbor of Dec. 7, 1941, removed the possibility of isolation. America was at war, like it or not. “The period of democratic debate on the issue of entering the war is over,” announced America First Committee chair Robert E. Wood. “[The committee] urges all those who have followed its lead to give their full support to the war effort of the nation, until peace is attained.” 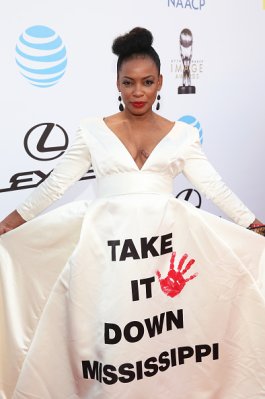 If Mississippi Won't Take Down the Confederate Flag, Obama Should
Next Up: Editor's Pick